The Internet mocked this woman’s ‘Frozen’ cake. They didn’t know why she baked it.

One baker’s attempt at an elaborate cake shaped like Elsa from Frozen went a bit awry, and the Internet pounced, mocking the cake and its crafter. If only they had known the full story.

A Reddit user uploaded a side-by-side comparison of two cakes Sunday, each shaped like the popular Disney princess, with the caption, “The cake that was ordered and the cake that arrived.” 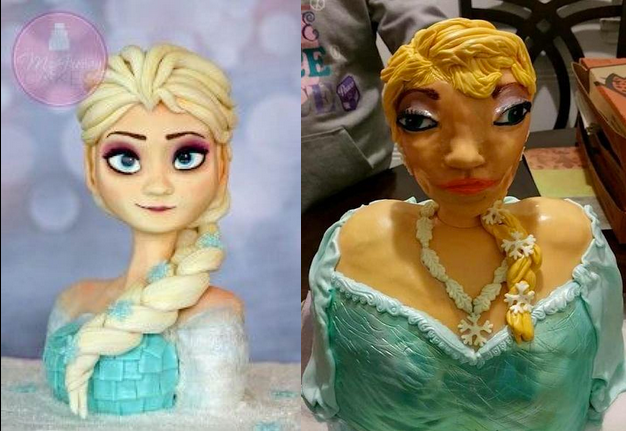 Comments from Reddit users were swift and harsh. “The sad thing is, as horrific as it looks, someone put serious time into making that cake,” wrote Reddit user ViciousPuddin. “Every misshapen blob, every terrifying curve and flourish. There are hours and hours of terrible craftsmanship here.”

“This is one of the things that haunts me about the way reality works,” added Reddit user Deradius. “It is possible to work really hard and still suck at what you’re doing.”

The Daily Mail piled on, posting a headline bemoaning the poor little girl who had to suffer through the travesty of the shoddy Elsa facsimile.

As it turns out, there was a lot more to the cake than anyone knew.

It had been made by Lisa Randolph-Gant of California, who owns her own baking business, Let’s Make a Cake. Randolph-Gant also volunteers her time for Icing Smiles, a nonprofit that provides custom cakes and treats to critically ill children and their families, according to the organization’s website.

“We understand that the simple things, like a cake, are luxuries to a family battling illness,” the site’s description reads. “Our goal is to create a custom cake for the ill child, or their sibling, that provides a temporary escape from worry and creates a positive memory during a difficult time.”

When the photo of Randolph-Gant’s cake went viral, the founder of Icing Smiles stepped in to set the record straight with a Facebook post.

“My heart broke for [Randolph-Gant] because I know how much of herself she puts into her donations,” the post says. “My heart broke for the family should they come across the posts because it may take from their joy of receiving the gift.”

And if that isn’t enough of a final word, the Facebook page for McGreevey Cakes, the creator of the original Frozen cake, weighed in.

“I think someone tried. I think someone had the guts to go for it… even when, I’m sure, they didn’t know if they could pull it off,” the post reads. “They took the chance anyway and put themselves out there. And maybe it didn’t come out they way they were hoping, but it’s their WORK.”

“‘Cause at the end of the day, they took a risk, and instead of hiding in their safe little comfy box, they stepped out of it for a second and gave it a go. And THAT’S what I think this life is all about.” 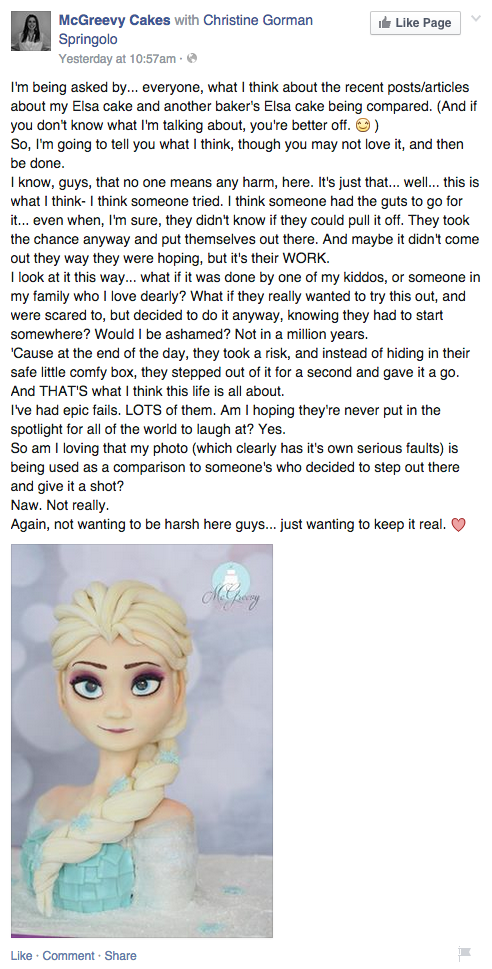 Wednesday is Food Day, after all. END_OF_DOCUMENT_TOKEN_TO_BE_REPLACED

Amazing sandwiches for a good cause? Make a bunch for us! END_OF_DOCUMENT_TOKEN_TO_BE_REPLACED

And they came to our studios, too! END_OF_DOCUMENT_TOKEN_TO_BE_REPLACED

It’s almost time send off 2017 and welcome in 2018, and we have some ideas about how you can do precisely that. END_OF_DOCUMENT_TOKEN_TO_BE_REPLACED

The pics alone will make you want to make a reservation. END_OF_DOCUMENT_TOKEN_TO_BE_REPLACED

We ate vegan blueberry cake and it was amazing. END_OF_DOCUMENT_TOKEN_TO_BE_REPLACED

Some people love cooking for the holidays. Others, not so much. END_OF_DOCUMENT_TOKEN_TO_BE_REPLACED

There’s so many to keep track of, you might have missed this one. END_OF_DOCUMENT_TOKEN_TO_BE_REPLACED