Forget Batfleck, Check Out an Exclusive Premiere of Boston’s Own Batman Film 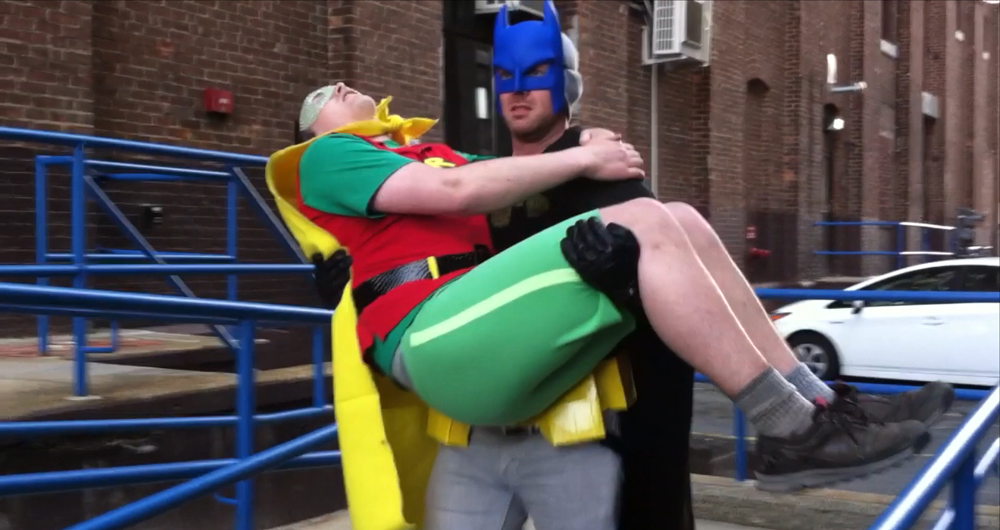 When Warner Bros. first announced Central Square’s own Ben Affleck would wear the cape and cowl for Zack Snyder’s “Man of Steel” sequel “Batman v Superman: Dawn of Justice,” the Internet exploded with rage. Comment trolls eventually calmed down by the time Snyder released the first official photo of Batfleck a year later, but the jokes kept coming. With the finished film not due in theaters until 2016, a few of Affleck’s fellow Bostonians decided to make their own Batman film.

Is it a guessed-at version of the upcoming Batman-Superman crossover? Nope. A sequel to Christopher Nolan’s “The Dark Knight Rises”? Not a chance. Instead, “Batman Triumphant” is a fan-made sequel to Joel Schumacher’s rightfully maligned 1997 film “Batman & Robin,” the George Clooney vehicle that tanked the franchise and paved the way for Nolan’s successful take on the celebrated comic book character.

Christopher Brown, a member of local band Vary Lumar, discovered plans for the defunct Schumacher film while doing research for another project. “ I saw that a script had been written,” he tells BDCwire. “I looked to see if anyone else had [made a fan film]…no one had.”

According to the Batman Wiki, Warner Bros. executives were impressed with Schumacher’s early work on “Batman & Robin.” They hired the director for an immediate sequel and, after a brief search, commissioned a script from Mark Protosevich, an inexperienced screenwriter who later contributed to the story for Marvel’s first “Thor” film. Among other things, the story featured new villains Jonathan Crane (Scarecrow), Cornelius Stirk, Harley Quinn, Mad Hatter, and the Man-Bat. Much of the cast of the then-current film would reprise their roles, while Jack Nicholson would cameo as the Joker and Chris O’Donnell’s Robin would become Nightwing.

The proposed sequel delved deep into Batman’s comic book lore, but poor reviews and a poorer box office gross for “Batman & Robin” ensured its demise. That is, until Brown got his hands on a leaked script almost 20 years later. He asked Eoin Breathnach, a friend and work colleague, if he’d be up for the job of playing Batman. Breathnach’s response? “Absolutely!” Together they hatched a plan to make the most homemade version of “Batman Triumphant” possible.

Brown initially took on the dual roles of director and actor, corralling friends and coworkers for parts while also playing the Scarecrow. Danielle Ameen, his fiance, designed and manufactured all of the films props and, when it became necessary, split the director’s chair. Meanwhile, Breathnach kept his word and donned the cape and cowl – a child’s blue Batman mask from Target and a gray cap. The film’s budget peaked at $200, but the cast and crew made sure to aim as low as possible.

“We were ambitious, yes, but we were also shooting for the gutter,” notes Brown. “Honestly, that’s the whole core of the thing. We weren’t doing this to make fun of Batman. It was just a bunch of friends having a lot of fun.”

This sentiment is readily apparent in the final product, which looks less like Snyder and Nolan’s superhero movies and more like something made with supplies borrowed from the audio and visual club’s closet by a bunch of drunk college students. And that’s why it’s so perfect. Had Schumacher been cleared to make this film, it would have been yet another stain on the cinematic chapter of a great character. Instead, Brown, Ameen, and Breathnach created something even Batfleck’s inner child actor would be proud of.

Brown suggests the team could have made the film a lot better with equipment and software they already possess, but they chose not to. “That’s not what we set out to do, so there’s no need.”

Enter to win a pair of tickets to attend The Hess Collection Seminar and Dinner as part of Boston Wine Festival 2018 at the Boston Harbor Hotel on Wednesday, March 14th. END_OF_DOCUMENT_TOKEN_TO_BE_REPLACED

Golden Globe and Emmy nominee Benjamin Wallfisch is the composer responsible for the score of the hit movie IT. I talked to Ben about his approach to scoring the new version of this iconic story and his thoughts on film and music overall. Some very insightful commentary; listen in. END_OF_DOCUMENT_TOKEN_TO_BE_REPLACED

Rupert Gregson-Williams is an award-winning film composer. He just so happened to compose the score for this summer’s big blockbuster Wonder Woman. We talked about his beginnings in film scoring, film scores that move and inspire him and, of course, Wonder Woman. END_OF_DOCUMENT_TOKEN_TO_BE_REPLACED

Jeff Rapsis is a New England-based composer and performer. Lately, he’s been creating live musical scores for silent film screenings. I talked to him about his process and a few of his upcoming performances at The Capitol Theatre in Arlington and the Somerville Theatre. You can keep track of where else Jeff is scoring silent films here. END_OF_DOCUMENT_TOKEN_TO_BE_REPLACED

Carl Isaacs, General Manager of Renewal by Andersen of Boston joined me in studio this morning to talk about a special offer: save 20% on windows and patio doors and your installation is included. Listen in for the details! END_OF_DOCUMENT_TOKEN_TO_BE_REPLACED

Planning on seeing Rogue One: A Star Wars Story when it opens this weekend? I joined Adam 12 to give you an idea of what to expect. But don’t worry, I didn’t give anything away. END_OF_DOCUMENT_TOKEN_TO_BE_REPLACED

No, not from afar, from the comfort of her couch. From the actual awards themselves. That’s where Meredith Goldstein was for the Oscars. She shared all the juicy, first-hand details with me. END_OF_DOCUMENT_TOKEN_TO_BE_REPLACED

Boston band Funeral Advantage is Tyler Kershaw. And Tyler Kershaw had a fun childhood, so it seems. END_OF_DOCUMENT_TOKEN_TO_BE_REPLACED