Football is “kind of like second nature” for this badass Conn. teen girl

Facing off against a member of your family on the gridiron can be a challenge. Just ask Patriots safety Devin McCourty, who is set to play against his twin brother, Tennessee Titans cornerback Jason McCourty, at Gillette Stadium December 20.

According to the Hartford Courant, Erin told Harry this past spring that after three years of soccer, she wanted to give football a try. After months of practicing with her father, Erin made Hall’s varsity squad as a senior.

“I’ve been surrounded by football my whole life,” Bellucci told NBC, adding that in kindergarten her dream was to be the first girl in the NFL. “So it’s kind of like second nature. It was meant to be, almost.” 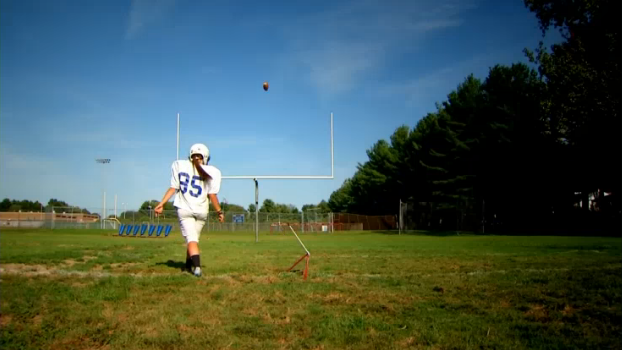 Even though Erin and Harry live under the same roof, they’ve kept their discussions football-free before this weekend’s big game.

“Nothing about injuries, plays, issues, anything in our house this whole week,” Harry told the Courant.

Besides her father, who is entering his 37th season of coaching, her uncle also has the football bug. He is former Patriots defensive coordinator Eric Mangini, and he currently holds the same position for the San Francisco 49ers.

Erin has earned the admiration of her teammates.

“Football is such a macho sport,” one of them told NBC. “To come in and be able to play with us, it’s kind of special that she’s able to do that.”

But Hall coach Frank Robinson isn’t giving Erin any special treatment. Bellucci isn’t the only placekicker on the team, and she has to compete for playing time each week. In the season opener, Bellucci went 1/1 in extra points in a 27-7 loss to Glastonbury High School, but ceded placekicking duties to teammate Angel Rodriguez for Hall’s next game.

“We’ve always had competition in practice,” Robinson told the Courant when asked about how he determines who kicks each game.

And when asked what advice she had to give other young girls who might follow in her footsteps, Erin kept it to the point.

“If this is something you want to do — anything, whether it be kicking, football, or scared to try out for a show, or anything, do it,” she advised other young girls. “You can really do anything if you put your mind to it.”