Flip phones, TVs, word-of-mouth: How the information trickled in on 9/11

This morning, you may have logged on to Twitter to find news channels’ Sept. 11 coverage, may have checked Facebook on your cell phone and seen your friends’ 9/11 statuses. On September 11, 2001, the way news was spread and consumed was vastly different.

“Back then, television was our main source for breaking news,” said Jennifer L. Gregg, Ph.D., associate professor and Chair of the Communication Department at the University of Massachusetts Boston. “People also listened to the radio, but if they wanted an in-depth story, they waited for the newspaper to come out.” 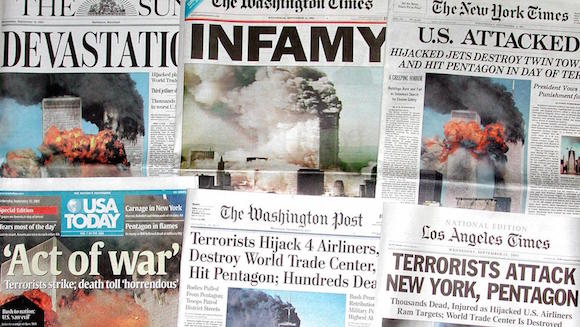 Today, mobile news is king. Seventy-eight percent of smartphone owners reported using their cells to check out the news in the week before they answered a 2014 survey from the American Press Institute and the Associate Press-NORC Center for Public Affairs Research.

Although Palm devices with Internet access and Handspring gadgets that could connect to email existed on 9/11, they were only about two years old. In 2001, instead of carrying around those newly emerging precursors to smartphones, people were more likely to use mobile phones that had little to no Internet or email connectivity. Eyewitnesses that would today be snapping images on their iPhones and uploading them to Twitter and Instagram called into news stations instead.

In the hours and days after the 9/11 attacks, photographs took on a different, especially heart-wrenching meaning.

The streets of New York City were plastered with missing person posters, the likes of which you probably wouldn’t see today on such a large scale. 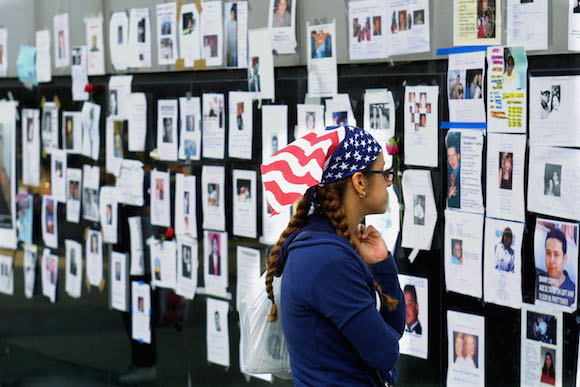 “I believe we would have digital posters instead. There would be entire websites set up with photos of missing people,” said Gregg, who thinks modern-day technology would also translate into more diverse means of spreading the word. “There would be Facebook pages, links through community pages, news outlets, and emergency response systems.”

Here’s how people found out about the attacks and connected with friends and family in the aftermath of Sept. 11.

Phones were unreliable on 9/11.

“I was over in [a Boston hospital’s] emergency department presenting something to the staff on youth violence. A woman came in and said a plane hit the World Trade Center. Then the second plane hit, and everyone realized it wasn’t an accident. There was a TV set in the ED, and I remember seeing a few photos of what happened on the Internet. Some of our family members were in New York. The cell phone network was completely overwhelmed, and landlines were down. We heard from my father-in-law at 9:00 or 10:00 that night.” —Robert Sege, 57, Boston 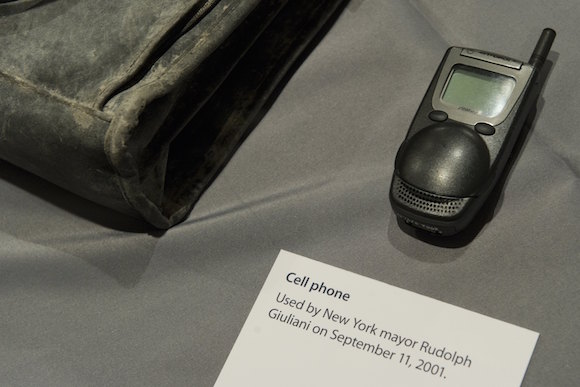 Some used radios to get the news.

“I was in sixth grade, and I heard about it in school. At one point, my teacher left the room in a hurry, and the assistant teacher took over. I remember thinking it was so strange that my teacher was leaving the room with a radio under her arm, presumably to listen to it away from the class. They waited until the end of the school day to tell us minimal details about what was going on.” —Julia Chan, 25, Boston 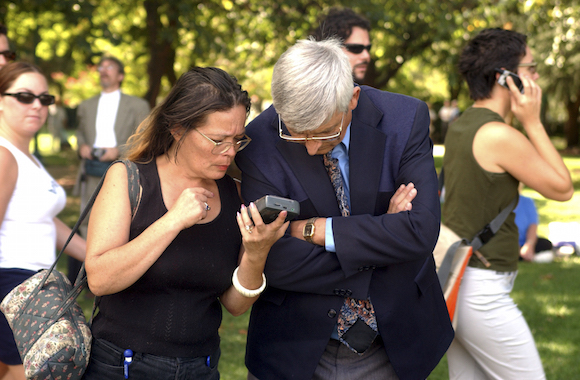 People were glued to their TVs, not to their smartphones.

“Coming into the office of the PR firm where I worked as a Vice President of Media Relations, I saw that the conference room was filled with people. The receptionist wasn’t at her usual perch, but sitting very close to the TV, as if she didn’t want to miss a word about the tragedy unfolding before us. As it turned out, the receptionist’s son, married with kids, worked in the World Trade Center. Unfortunately, he died that day. The next day, I volunteered as a media spokesperson for the Greater New York Area of the American Red Cross, working 12-hour shifts.” —Samuella Becker, 60, New York City

Many watched the Twin Towers collapse on live television.

“I was working on New York Governor George Pataki’s reelection campaign. My boss had a little TV on his desk. A few minutes after I got in, he called me in and said, ‘Hey, Chapin, it looks like there’s a fire in the WTC.’ Everyone started turning on their TVs as the events unfolded. We all watched the second plane hitting the second tower, and then the tower collapsing live on TV. Cell phones were unreliable in the immediate aftermath, so email and office hard lines were used to contact friends and family. After a few hours, we were all told to go home and get safe. Via email, most of my college friends in New York City coordinated to meet up at a friend’s apartment in Murray Hill.” —Chapin Fay, 37, New York City

Our sense of connection to the attacks came from newspapers, not from our timelines.

“I heard news of a plane flying into the World Trade Center on the radio. It didn’t sound serious, so I didn’t worry too much. When I got into the office, we saw newsfeeds on Boston.com, CNN, and NPR showing the first tower engulfed in flames. We all jumped into my station wagon and drove to my house, then watched in horror as the Towers fell. It was only in the next few days that we learned how many connections we had to the victims. Our hearts were broken for those we knew and for thousands of strangers. I became addicted to the New York Times obituaries in the paper format. By reading about [each person], I felt I was helping to keep their memories alive.” —Leslie Saul, 60, Boston 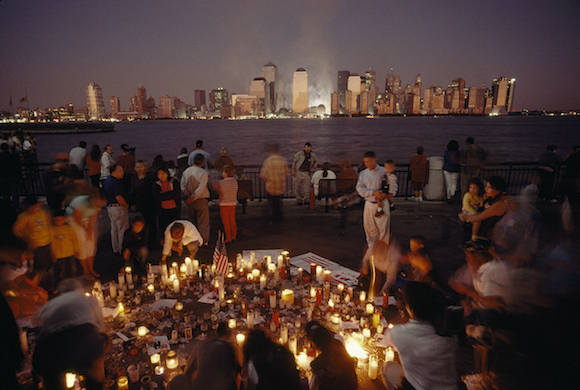