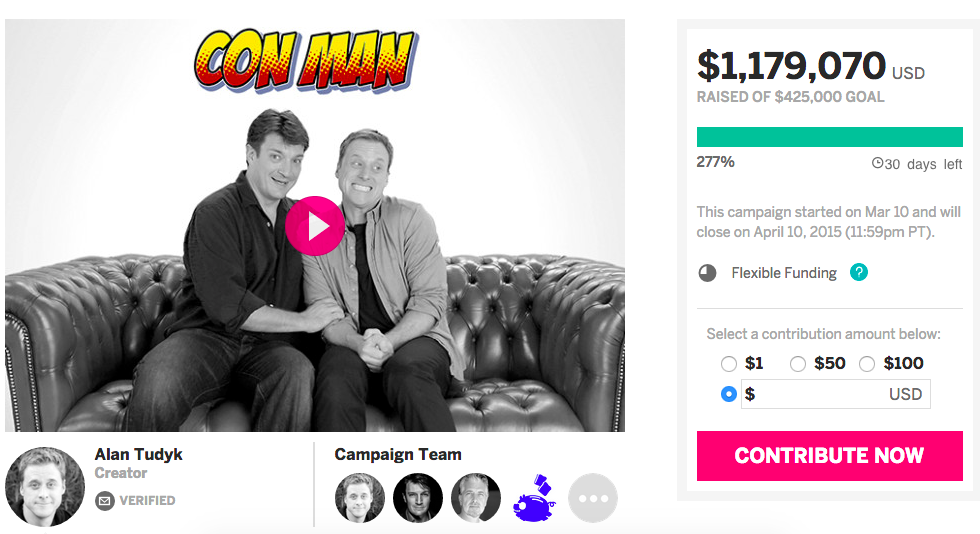 Firefly fans finally get to relive the glory days because Captain Reynolds is back…well, not quite. Nathan Fillion and his trusty pilot, Alan Tudyk, are back.

Tudyk and Fillion, the producers and main characters of Joss Whedon’s Firefly, the sci-fi show with an enormous cult following, just launched an Indiegogo campaign on March 10 to fund production of a new sci-fi web-series called Con Man, a narrative series about the people of sci-fi conventions. From the Indiegogo description:

Wray Nerely (Alan Tudyk) was a co-star on Spectrum, a sci-fi series which was canceled –Too Soon– yet became a cult classic. Wray’s good friend, Jack Moore (Nathan Fillion) starred in the series and has gone on to become a major movie star. While Jack enjoys the life of an A-lister, Wray tours the sci-fi circuit as a guest of conventions, comic book stores, and lots of pop culture events.  The show will feature all the weird and crazy things that happen to Wray along the way to these events.

The two actors play – strangely enough – former actors who played a captain and pilot whose sci-fi show was rudely cut off. The captain actor goes on to become famous, and the pilot actor… doesn’t. Sound familiar?

The fans have gone nuts.

Barely more than 24 hours after launching the campaign, a little past noon on Wednesday, the two actors-playing-actors (eerily similar to Galaxy Quest) hit their goal of $425,000, and then almost immediately doubled it within a few hours. So many snowballs.

The campaign has now hurdled over the 1 million dollar mark and is reaching a series of stretch goals that will ensure the series has more episodes and donors receive additional perks.

Let’s hear it for Firefly reborn…sort of.

Always a pleasure to have Boston.com’s Perry Eaton in studio for a chat. After we talked a bit about Pearl Jam at Fenway and Perry’s new podcast, he filled us in on Game of Thrones live and Narragansett’s new Bananagrams-themed brew. END_OF_DOCUMENT_TOKEN_TO_BE_REPLACED

No, not from afar, from the comfort of her couch. From the actual awards themselves. That’s where Meredith Goldstein was for the Oscars. She shared all the juicy, first-hand details with me. END_OF_DOCUMENT_TOKEN_TO_BE_REPLACED

It was wonderful having our good friend Meredith Goldstein back in studio this morning. She dug into the latest edition of Love Letters, which prompted us to play this song. And of course we had to discuss the Oscars. Make sure you’re following Meredith on Twitter, as she’ll be live-tweeting the awards this Sunday night. END_OF_DOCUMENT_TOKEN_TO_BE_REPLACED

Our first edition of TV Sets for 2016 might be better than every edition from 2015. END_OF_DOCUMENT_TOKEN_TO_BE_REPLACED