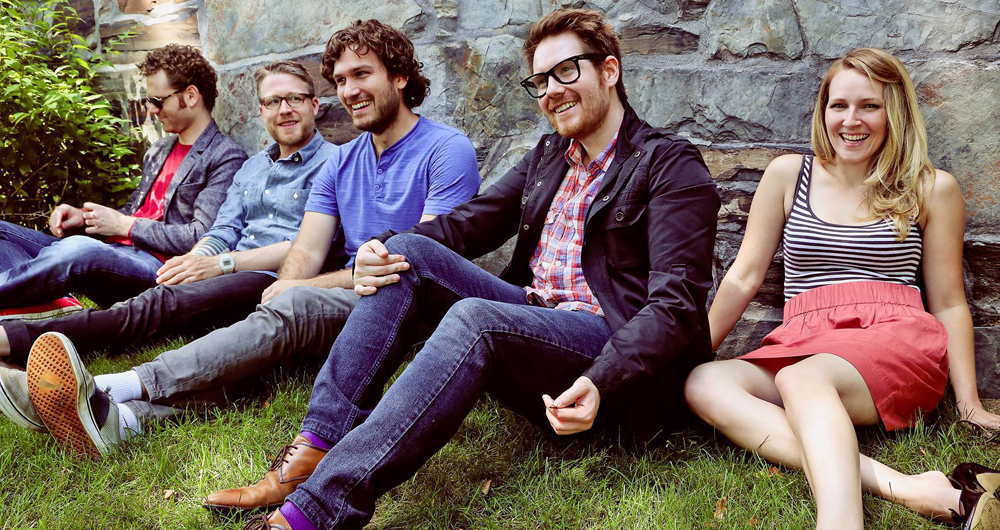 The vibrant effervescence that beams brightly from Parks’ catchy up-tempo track, “Sweater Weather,” is the kind of warmth that supersedes any other Boston-based band trying to find their place in the sun. Packed with bucolic arrangements and delightful vocals, ‘Weather’ serves as a precursor to the inevitability that frontman Brian King is on the verge of becoming an indie pop savant. The catalyst to King’s flourishing creativity is rooted in the power of reinvention.

“[Former band] Oranjuly was over in 2011—I pretty much ended up getting rid of everyone. I just didn’t want to do that project anymore—I wanted to write some newer-sounding stuff.” This growth ultimately led King in the direction of like-minded individuals. “In Oranjuly, it was basically me writing everything. But everyone in Parks is super talented—I’m not writing all of their parts. I can trust them to learn how to play songs.” King’s knack for penning lyrics won Parks the John Lennon Songwriting Contest at last year’s CMJ Music Marathon—a confirmation that wasn’t expected, but wholly deserved. “I’ve never entered a songwriting competition ever—and to be chosen from thousands of bands was really amazing.”

Those longing to wrap their ears around Parks’ debut album are in luck: the band has taken to PledgeMusic to raise money to release a record that they have been pouring themselves into for the last year. “You get about 60 days to hit your goal, so we have a little bit of time. We love having the chance to interact with people who love our music. PledgeMusic appeals directly to superfans that don’t mind paying for extra things.” A list of said things include handwritten lyrics, autographed vinyls, and the chance to have dinner and a house concert with Parks. When I scoff at some of the prices for these items, King manages to find a silver lining. “Sure, the dinner and house show is 1,000 bucks but if you grab 10 or 15 of your friends and split it, it’s not so bad.” I then inquire about what the dinner would consist of. He quickly reassures me of Parks’ impressive culinary skills. “You know we can make a mean steak, right?”

Parks plays The Sinclair in Cambridge this Friday, June 27 with Air Traffic Controller, The Field Effect, and Bent Shapes as part of WERS’65th Anniversary show (8 p.m., $12, 18+).

END_OF_DOCUMENT_TOKEN_TO_BE_REPLACED

Enter to win a pair of tickets to attend The Hess Collection Seminar and Dinner as part of Boston Wine Festival 2018 at the Boston Harbor Hotel on Wednesday, March 14th. END_OF_DOCUMENT_TOKEN_TO_BE_REPLACED

I referred to it as the “best kept secret” in Boston arts for the holidays. END_OF_DOCUMENT_TOKEN_TO_BE_REPLACED

Boston’s arts scene shines at this time of year. END_OF_DOCUMENT_TOKEN_TO_BE_REPLACED

It’s so much more than a holiday show. END_OF_DOCUMENT_TOKEN_TO_BE_REPLACED

Rock for a cause this holiday season. END_OF_DOCUMENT_TOKEN_TO_BE_REPLACED

Get out and see a show this holiday season, and save some money when you do. END_OF_DOCUMENT_TOKEN_TO_BE_REPLACED

You can help give the gift of music to kids in need this holiday season. END_OF_DOCUMENT_TOKEN_TO_BE_REPLACED

Be honest: when’s the last time you attended a Gala? END_OF_DOCUMENT_TOKEN_TO_BE_REPLACED

The October staple returns on the 21st. END_OF_DOCUMENT_TOKEN_TO_BE_REPLACED