Feel like a zombie with this ‘Walking Dead’ drinking game 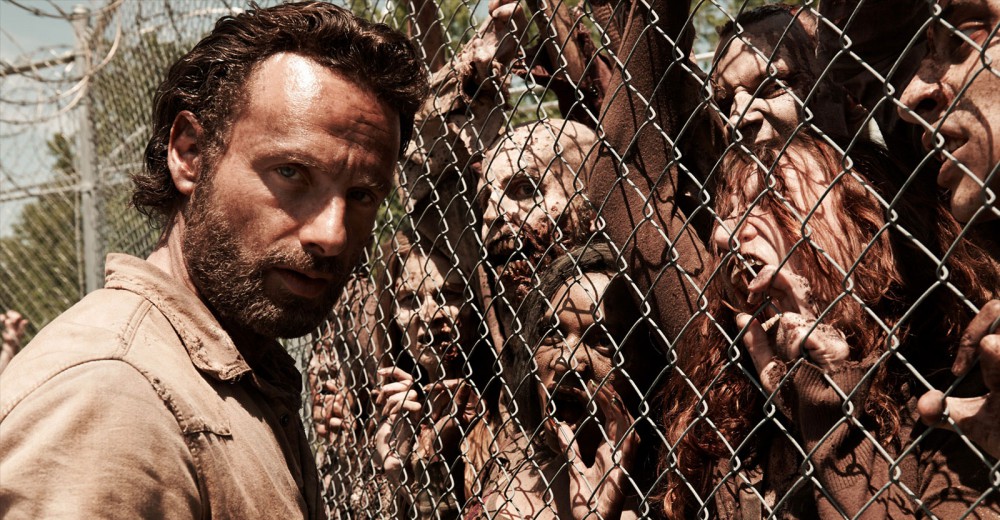 “The Walking Dead” returns from a long winter break this Sunday at 9 p.m. for the back half of its fourth season. For those looking to make the post-apocalyptic drama even more exciting (if that’s possible), we’ve created a drinking game which, if followed correctly, guarantees to pretty much turn you into a zombie for work Monday morning (or at least get you tanked by the time “Talking Dead” comes on).

NOTE: Spoilers abound for those not caught up on the first half of Season 4. Also, it should be mentioned that you shouldn’t do anything stupid after playing this game, like drink and drive. You will not come back as a zombie.

Because on a show that’s chock-full of gruesome, heart-wrenching deaths, I’m still pissed about this one a whole season later. Dammit, T-Dog, why’d you have to go? We felt like we were just getting to know you. Speaking of which…

Remember when it looked like Axel and Carol were going to start making apocalypse babies? Nope. Axel got an unexpected bullet to the face. How about Merle? He was just starting to become likable when his brother Daryl had to put down his zombified corpse. Fans have learned not to get attached to characters, lest they get ripped to shreds by walkers – maybe killing them before we can commit is the creators’ way of sparing us the “Red Wedding”-level heartbreak that happens when we get to know them all too well.

In the Season 2 finale, everyone met up fairly quickly on the highway after the farm fell. But after the massacre at the prison at the end of the mid-season finale, it isn’t quite clear who made it out alive and who didn’t. “Walking Dead” creator and executive producer Robert Kirkman has said that episodes will focus on small groups or individuals, and that viewers shouldn’t “expect them to be reunited as quickly as after Hershel’s farm. They’re going to endure a lot more.” With so many characters scattered in the wind, every time part the gang meets back up is cause for celebration and a sip.

You have to figure some of the gang didn’t make it out of the gunfight at the apocalypse corral, possibly even including the wee baby Judith. Some of them might find the friends they’re looking for dead, or even undead, as in Daryl’s case when he found his brother Merle zombified. If someone whose fate was unclear in the midseason finale turns up dead, slug back a shot.

When guns, knives, and swords don’t cut it, our heroes use whatever’s around to dispatch the undead, including … hatchback doors? Other highlights include Michonne spinning her tires on a walker’s head, and The Governor beaning one with a golf ball.

Danai Gurira, who plays Michonne, took lessons so she would know how to handle her samurai sword. It’s probably the most useful weapon in the zombie apocalypse, since it never runs out of bullets and doesn’t make any noise. Also, props to the creators for giving lots of screen time to a strong, badass female character after too many episodes of the women on the show just doing laundry, or Lori going all Lady MacBeth on Rick about how he should man up and kill Shane already.

Cutty – sorry, actor Chad Coleman – joined the cast in Season 3 as hatchet-swinging, comic book fan-favorite Tyrese. This season, Lawrence Gillard Jr. (the late D’Angelo Barksdale) took on the role of former Army medic and troubled alkie Bob Stookey. Not sure if AMC is consciously trying to snatch up “Wire” alums, but hey, it makes sense – Baltimore and the post-apocalyptic nightmare world of “The Walking Dead” have a lot in common. And Omar Little and his shotgun would kick a lot of zombie ass.

An added bonus of crossbow bolts is that they are also reusable, if you have the time (and the stomach) to pull them out of a walker’s brains. Based on how often Daryl uses the weapon, he must have started making his own by now, though. I wonder if Norman Reedus is sponsored by Cabela’s or something.

If something gruesome happens and you find yourself having to close or avert your eyes (or leave the room) while guts are flying like spaghetti, then you chug the rest of your drink, you pansy. Thanks to special effects supervisor Greg Nicotero, the zombie kills have only gotten increasingly gross with each season. You feeling queasy? Made the mistake of sitting down to watch with a bowl of pasta? Get over it, or chug. We’re not here for the Glenn and Maggie love story, after all. We’re out for blood.

Look, the kid’s growing up and becoming more independent and responsible and shit, so the days of all of the adult characters telling him to stay in the house (and him not listening to them) may be over. But we can’t forget what happens when he angrily defies his parents, who have better things to do than worry about where he is – people get killed. Carl seems to have gotten this out of his system, but AMC’s previews for Sunday’s episode prominently feature Carl…and a house…you can see where this is going.