Boston uber-supergroup Animal Hospital Ensemble has played at the Hynes Convention Center (in large ballrooms) on the last two New Year’s Eves. This year though, they’ll be playing the sound-space of the convention center itself.

The (approximately) 30-musician ensemble is a loving extension of the group’s leader Kevin Micka’s solo guitar/loop project Animal Hospital. What began as an effort to create something a little more sonically rich/less isolated out of his solo material has matured into a giant amoeba of musical talent willing to take on any experimental sonic dare that Micka throws at them. Like distributing themselves across two floors of the Hynes Convention Center’s entryway rotunda and playing their instruments facing the building’s busy escalators.

ring in 2013 with the Animal Hospital Ensemble from Michael H on Vimeo.

“I suggested it to the First Night people as kind of a joke,” says Micka. “I was just throwing it out there thinking they’d say it couldn’t work, but they were actually like ‘we’re going to try to make it work.’ It’s a good reminder to always throw out ideas even if you maybe haven’t thought them through or think they’re silly or that someone’s going to just shoot them down.”

Animal Hospital Ensemble (which consists of members of so many of Boston’s most significant bands that it’s sometimes a little bit frightening when they’re all in the same place at the same time), is used to playing around (rather than in front of) an audience.

“The solo version of this music started as a monaural thing, and I was always mixing it trying to get more depth.” Micka explains. “Taking advantage of having this large group of musicians playing means it can be all over the place—very, very surround.”

At an Animal Hospital Ensemble performance you are submerged in an ocean of sound. Music washes over you from all directions. Waves of it crash against each other and then subside into sound-foam. Wherever you turn, you find yourself facing an amazingly talented musician from New England’s rock scene playing their heart out in a way that feels personal. They’re playing for you and for themselves and for each other and all of those intentions weave together around you. Sound is vibration, and each tone has emotional qualities shaking through it, so it’s a very moving experience. If you give yourself over to it, you’ll feel slightly changed afterwards.

Immersing yourself in an Animal Hospital Ensemble performance is always a great way to transition from one year to another, but this year, you’ll be able to experience the band while transitioning from one floor to another as well. 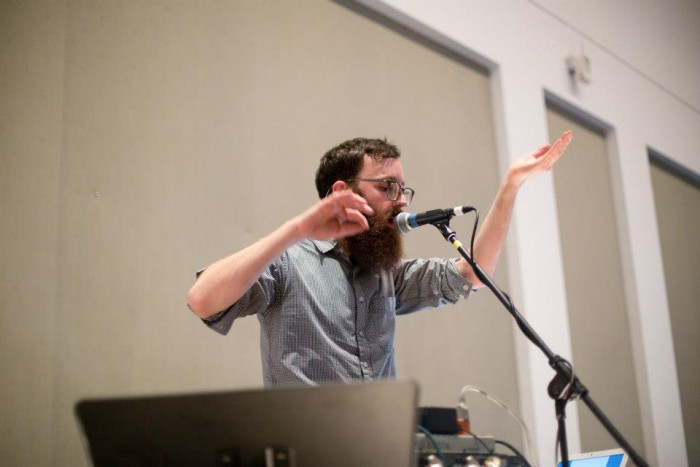 “Level one and level two is where everybody will be. It will basically be like 12 to 15 people on each floor…drums in the corners. Since the room is three or four stories tall and has a dome at the top, it will be amplified acoustically—without a P.A.—just the guitar amps. The drums are all acoustic.” Micka pauses here and then adds, “It will be pretty interesting I think. If you’re down the hall, you won’t see anything but you’ll be like ‘what’s going on down there?’ Or…it’ll be kind of funny if you’re just waiting for the bathroom and there’s somebody just right there [points to schematic] playing something. That’ll be a little weird!”

Micka is looking forward to the complexity of the arrangement, but also the openness involved in the setup.

“We’re trying to take more advantage of the larger space—not playing in sync as much, trying to be more free-flowing…. Another thing I like about this a lot is that it opens up these new ways of listening to live music to everyone—not just people who are already interested in art or music. These listening experiences are really accessible in this space.”

What kind of listening experiences does he mean exactly?

“Just hearing the room really. Go to the different floors, ride up and down on the escalators. We probably won’t have musicians on the third level, but I’m sure it will sound really cool up there.”

“Having the audience inside of the circle is the main point, but being able to move around and change your perception and experience is important too.”

Micka advises that new Animal Hospital Ensemble listeners “keep moving around. I mean, if you can find a spot out of the way and want to just sit and experience it from there, that’s great too. I know some people close their eyes, even lie down somewhere…but I don’t know if that will work here!”

Probably don’t lie down at Animal Hospital Ensemble’s performance at First Night this year, and maybe don’t close your eyes on the escalator either, but definitely do drop into the Hynes Convention Center entryway rotunda from 8:30 p.m. through 9 p.m. if you want to hear a convention center played like it’s never been played before.

Animal Hospital Ensemble @ DOT A I R from Subvert Design on Vimeo.

Enter to win tickets to see Trio Da Kali at The Villa Victoria Center of the Arts (Newton, MA) on April 10th. END_OF_DOCUMENT_TOKEN_TO_BE_REPLACED

END_OF_DOCUMENT_TOKEN_TO_BE_REPLACED

Enter to win tickets to Rhye at The Paradise on February 28th. END_OF_DOCUMENT_TOKEN_TO_BE_REPLACED

END_OF_DOCUMENT_TOKEN_TO_BE_REPLACED

Enter to win a pair of tickets to attend The Hess Collection Seminar and Dinner as part of Boston Wine Festival 2018 at the Boston Harbor Hotel on Wednesday, March 14th. END_OF_DOCUMENT_TOKEN_TO_BE_REPLACED

Her new album has been pushed back, but we have Kimbra’s new single for you. END_OF_DOCUMENT_TOKEN_TO_BE_REPLACED

The folk duo returns with a new record this week. END_OF_DOCUMENT_TOKEN_TO_BE_REPLACED

Now that we’re done looking back at 2017, let’s look ahead at 2018. END_OF_DOCUMENT_TOKEN_TO_BE_REPLACED