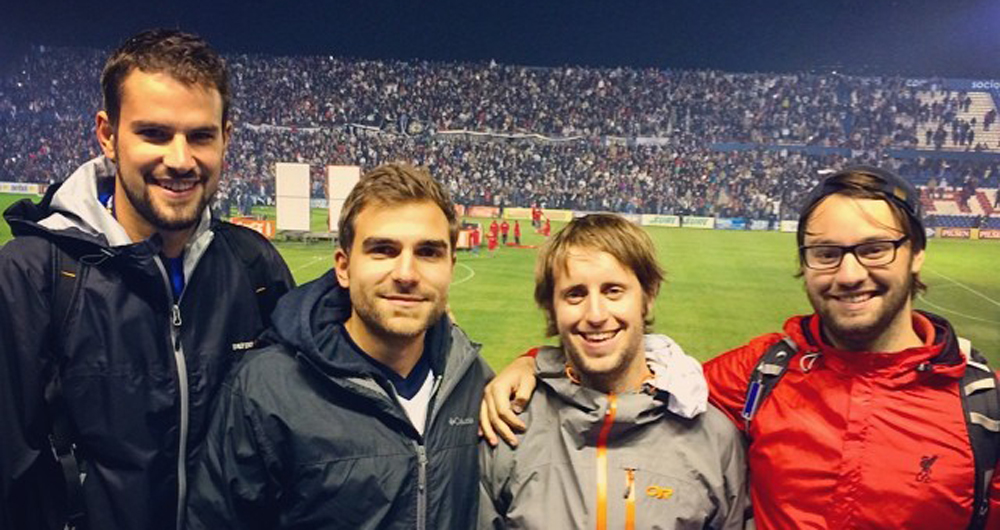 Meet three soccer devotees, Peter Karl, the obsessed one, Sam Mathius, the brains, and Petar Madjarac, the director. These aficionados are in Brazil soaking in the World Cup atmosphere after four months of traveling across Latin America, documenting the public’s passion for the beautiful game and connecting that culture to soccer’s rise in the United States.

To produce their documentary, American Fútbol, the guys had to leave behind their jobs and loved ones to take on a journey that spans over 7,000 miles.

An accomplishment for schools that randomly appoint people to dorm rooms when they first get to college, Petar, Sam and Peter got placed in a room together their freshman year at Emerson College.  They quickly formed a bond after spending many Sundays at Cambridge bar Phoenix Landing to cheer on their favorite soccer team, Liverpool FC.

Petar, from what was Yugoslavia, Sam, from Louisiana, and Peter, from Connecticut, parted ways after graduating, but their love for soccer and the itch to explore Latin American culture brought them back together for this journey.

They’ve been swamped putting together the documentary and embracing the carnival on steroids that is the World Cup in Brazil, but the guys took some time to talk about playing soccer blind, fighting through sickness and what’s really going on in Brazil.

PM: As a child growing up in Europe it comes with the territory.  However, I found it difficult to maintain that passion in the U.S. until about 5 years ago when soccer exploded in popularity.  Now I can watch my team play every week online or on TV, and events like the World Cup get excellent coverage in the States.

PK: My soccer passion developed in college. All my life, I’d been an ‘American sports guy.’ Played baseball my whole life, including at Emerson. Then, my brother started working for the New England Revolution as a ticket representative. He brought me to some games, then started bringing me to the Phoenix Landing in Cambridge to watch Liverpool matches on Saturday mornings. Then, when Sam became my roommate, he influenced me a lot.  We spent many nights playing FIFA on Playstation.  I just started using him as an encyclopedia, understanding the game, players, history, rules.

SM: I’ve been obsessed with soccer for as long as I can remember. My brother and sister both played at young ages and I followed suit. While Southern Louisiana isn’t thought of as a hotbed for soccer, it was a great place for me to embrace the game. 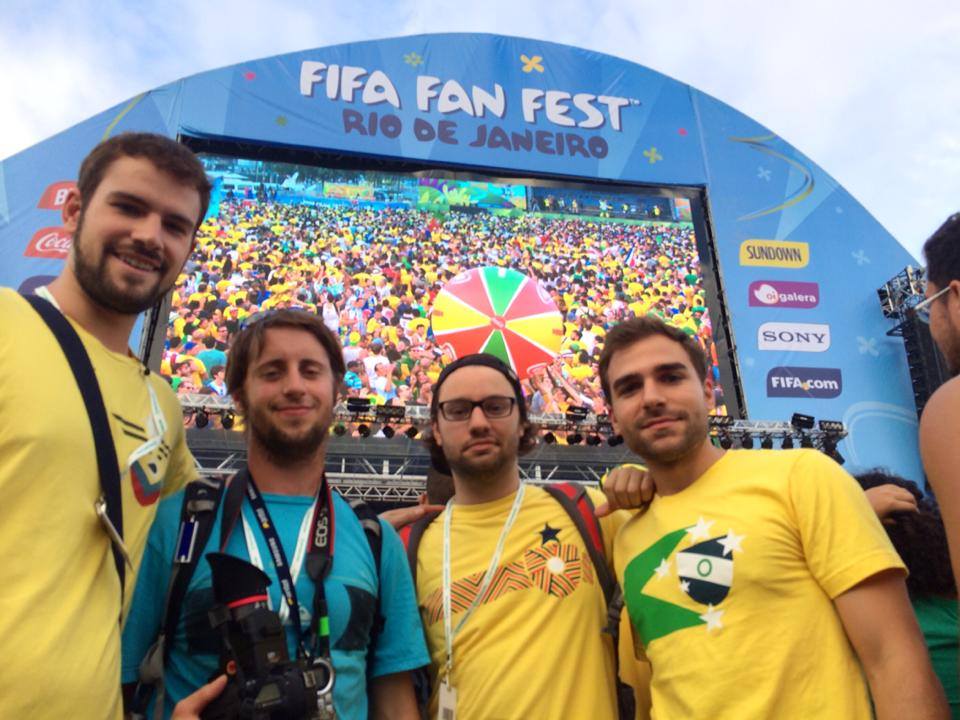 SM: I think the soccer scene in Boston is one of the most vibrant in the country. When you think about all the ex-pat communities in the area, it’s not surprising. We have large Irish, English, Portuguese and Brazilian communities to name a few. All of them love soccer. Check out The Phoenix Landing in Cambridge or The Banshee in Dorchester for any English Premier League or U.S. National Team match and you will see just how passionate and knowledgeable locals are about the sport.

PM: The soccer scene in Boston is strong because of the investment the Kraft family has made in the Revs, as well as John Henry’s purchase of Liverpool F.C.  However, if the Revs where to build an MLS stadium close to downtown, where fans can take the T to matches, I believe that Boston could have one of the strongest soccer cultures in the country.
PM: The main purpose of the documentary is to showcase Latin America’s deep cultural-connection to soccer with The World Cup in Brazil as the centerpiece. We want to share this experience with other Americans so that we can all learn from these cultures as our own unique soccer culture develops.

PK: You can understand more about any country’s identity through its soccer culture. So this documentary, and our trip to all these soccer-loving Latin countries aims to provide that understanding. To explore the cultures through soccer, to better understand where we are headed as a soccer nation, and society as a whole.
PK: We funded this movie through three fundraising techniques. Our first was personal and familiar donations. That gave us a base. It got us going, and we could see how big the task was to reach our minimum goal of $70k. Then we raised $20k through a month-long Indiegogo campaign. Then, we acquired some minor sponsors. The bulk of the money came from very generous family members and friends. In total, we raised about $70k.

SM: Without our sponsors, getting the word out about the project would have been extremely challenging, so they played a huge role in the fundraising aspect of the project 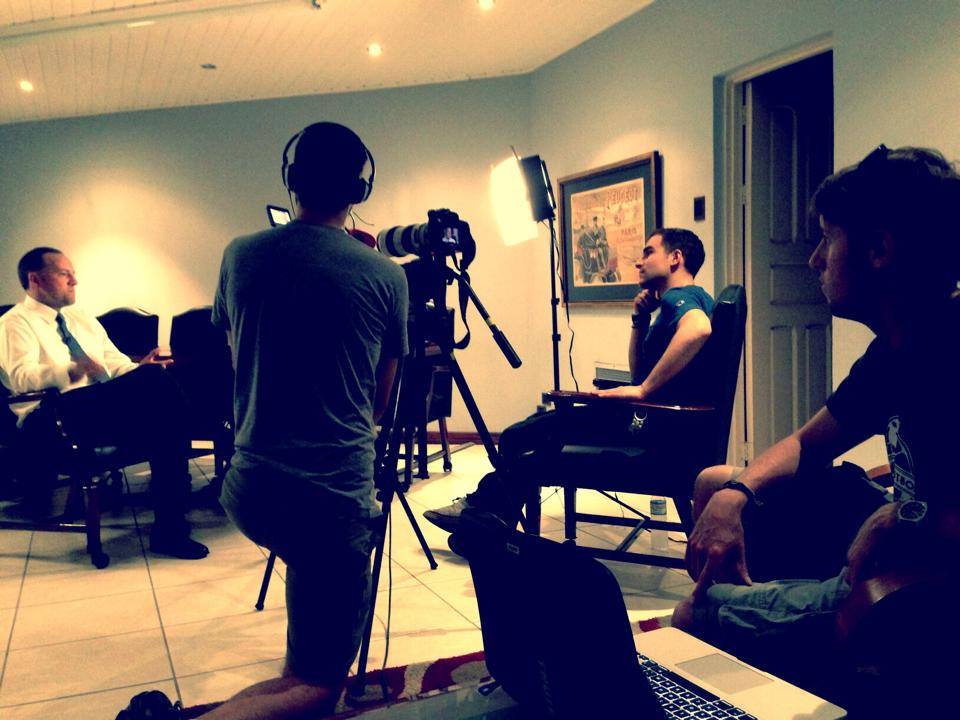 PK: We all passed a sickness around in Costa Rica. I got it last, and I got it the worst. On the morning of a 16-hour travel day, I woke up at two AM, and spent two hours wrapped around a toilet. At four AM, we had to take off for the airport for a three-legged trip to Bogotá, Colombia. Let’s just say, I’ve never seen so many concerned flight attendants. From San Jose to Panama City to Miami and Bogotá, I used up droves of barf bags. It was one of the worst days of my life. Thankfully, the guys were really patient and helpful. They carried all the bags, while I dragged a blanket and pillow through every terminal. Thankfully, after 24 hours, my hell was over.

SM: With this type of documentary, there are lots of unknowns. It’s difficult to predict when you will be able to meet with contacts or which teams will advance to certain games. Since we are constantly traveling, there is a short window we have for getting things done.
PM: When we were traveling to Rio for the start of the tournament, the World Cup was in full swing in the airports.  Everyone was wearing their country’s colors, signing and chanting; ready for the football festival that is the World Cup.  It was the most entertaining travel day I have ever had.

PK: For me, the most memorable moments has been traveling to the Chota Valley in Northern Ecuador.  We followed a young 15 year old with huge potential. Many believe we’ll be seeing him play in Europe one day. We met his family, met the people of the village of El Juncal. And saw how soccer really is the ticket out for many of these kids, who play all day long on the banks of the Rio Chota.
SM: I’d say they are a bit more passionate. That’s not to say we don’t have our fair share of soccer lovers in the States, but south of the border, everyone loves the game. From Mexico to Brazil, soccer is a religion. We asked one Mexican guy what U.S. fans could learn or adopt from Mexican fans to make the sport better in our country. He said that we should embrace the family sporting experience and get in front of the TV with your brothers, sisters, parents, aunts, grandparents, etc. and make it a bonding experience. That was a pretty eye-opening statement for us. It’s not too common for that to happen in the United States for most games, but it’s common in Mexico and other Latin cultures, which is something that could help families here build long-term bonds with each other and create generations of soccer fans at the same time.

PM: In Tijuana we met a journalist named Alex who was born in the U.S. but of Mexican parents. He works for the San Diego Union Tribune, but crosses the border to cover the Tijuana Xolos (the soccer club in Tijuana).  He told us that going to Tijuana that often, using his Spanish, and being a part of the soccer culture in Mexico has allowed him to feel more Mexican than anything else. “I am Mexican-American, and Xolos is the hyphen for me” As a multi-cultural person myself, it was powerful to see how a soccer club can help bridge two cultures within someone else.

PK:  In Colombia, we spent a good deal of time with a family that runs a blind soccer team there. They were amazing. The father has been blind since age 7, and is the team’s founder and star player. The youngest son, who is sighted, is the team’s goalie. The older son, also sighted, is the manager. They practice with a full squad twice a week, and compete in tournaments all over Latin America. It was inspiring to see this family crush an obstacle like blindness with their collective passion for soccer. 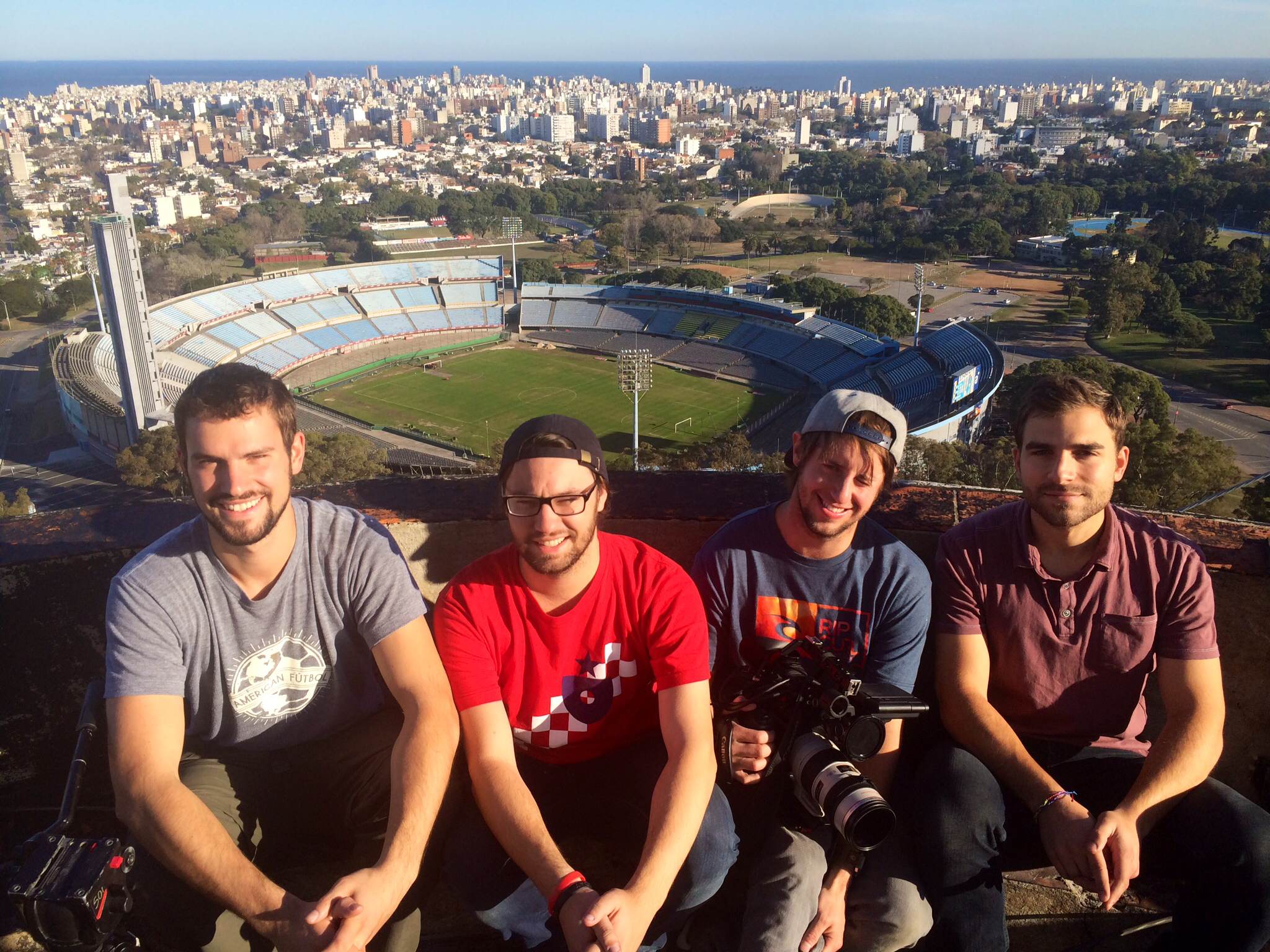 PK: We’ve just been in Rio for the past few days, and it’s been great. Really, no signs of the protests everyone has been afraid of. But I’m told if Brazil gets knocked out of the tournament, then they may flare up. Rio is a very exotic city, and one that’s embracing the attention. I’ve never been to an event like this, where every group you pass proudly sports their country’s colors.

SM: Brazil has been amazing. The people here are incredible and the culture is unlike any we have come across yet. While most of the build up to the World Cup was focused on the negative side of overspending and Brazilians’ unhappiness at how the tournament was organized despite infrastructure lacking across the country, protests and violence have yet to be a major issue. While there is a definite dark side to this tournament and how it was put together, it seems like most Brazilians are embracing the event. Some people have told us they are just trying to make the best out of the situation. They want to be welcoming hosts and portray a positive image of their country. I think that’s admirable.