Sure, you can give Citizenfour another viewing for some insights on Edward Snowden, arguably the most famous whistleblower in history. But how much does he miss Hot Pockets and what’s his stance on dick pic surveillance? As per usual, John Oliver is ready and willing to ask the real questions on Last Week Tonight, and grilled Snowden harder than any party in Citizenfour on last night’s show.

“I don’t know,” Oliver mumbled when Snowden failed to show up to the interview on time. “You think he’s coming? ‘Cause my argument is, why would he? When you think about it.”

Snowden, ever the cool guy at the party, did show up to the interview, much to Oliver’s delight and after quite a bit of waiting. 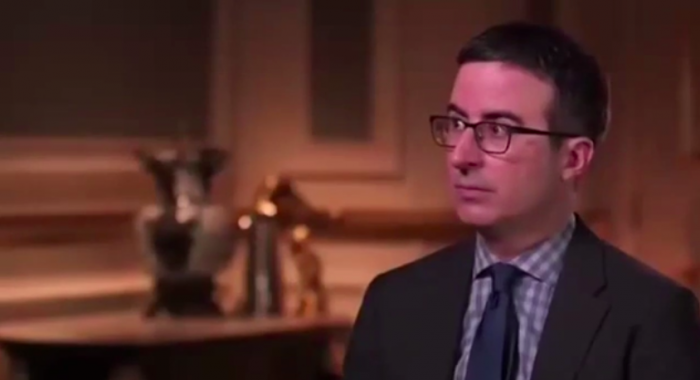 Once Snowden did arrive, Oliver had plenty of fun.

Though his circumstance is sticky as ever, Snowden retains that he is happy that his whistleblowing caused such a major wave in global culture, saying that he had feared that the revelations would be a “three-day story” and was happy to have been proved wrong. Oliver challenged this statement, saying that the American people didn’t understand the significance of his story as much as he may believe, and brought evidence to back it up.

Oliver demonstrated the types of policies that did resonate with the general public, too. The host showed a series of interviews where random people were asked how upset they would be if they discovered that the government had access to their nude photographs, which Snowden says they absolutely do. Cue the dick pic rage.

“Well,” Snowden said after a moment, “the good news is there is no program named the Dick Pic Program.”

The following explanation is brilliant – Oliver gets Snowden to explain the extent and importance of government surveillance strictly through the lens of exactly how a dick pic could get intercepted and held onto by the American government. According to the comedian, “this is all they give a fu** about.”

Not only is this a big moment for those following Snowden’s story, it’s a major moment for the satirical news – Oliver’s clips, originally aired on HBO, have a reputation for going viral and influencing social change. Snowden’s biggest mistake?

“I guess I never thought about putting it in the context of your junk,” he admitted to Oliver.

A decade of Wreck The Halls. END_OF_DOCUMENT_TOKEN_TO_BE_REPLACED

Leah Wellbaum from Slothrust brought her trusty six-string to Studio B and turned in the first RadioBDC Session of 2017. Check out her three songs and her chat with Julie Kramer, recorded live on February 28, 2017. END_OF_DOCUMENT_TOKEN_TO_BE_REPLACED

Comedian Myq Kaplan is a comedian named Myq Kaplan. He joined me in studio this afternoon, and he’s at Laugh Boston this weekend. Click here for tickets. END_OF_DOCUMENT_TOKEN_TO_BE_REPLACED

Mike McColgan and Lenny Lashley of Street Dogs were in session on November 30, 2016 to play three songs and chat about their annual Wreck The Halls shows at Brighton Music Hall December 15-18. END_OF_DOCUMENT_TOKEN_TO_BE_REPLACED

Tegan and Sara stopped by for a chat before their House of Blues show on Halloween night. END_OF_DOCUMENT_TOKEN_TO_BE_REPLACED

My goodness, I love Sue Costello. It was great having her back in studio today to talk about her one-woman show, #IAmSueCostello, playing tonight at the Revere Hotel. Click here for tickets. END_OF_DOCUMENT_TOKEN_TO_BE_REPLACED