Here we go heading off into Christmas with plenty of snow in New England.

They’ll fire you up for sure! The Powder Awards are the Academy Awards of Winter. Hosted by Powder Magazine, this annual event brings together the who’s who of winter sports filmmakers, adventure seekers and the top winter sports athletes on the planet. It’s a party for sure and when this band of characters comes together, the energy in the room explodes as pros, fans, and winter industry executives witness all that is possible on snow in film and video.

Spending Christmas at Sea on the Volvo Ocean Race 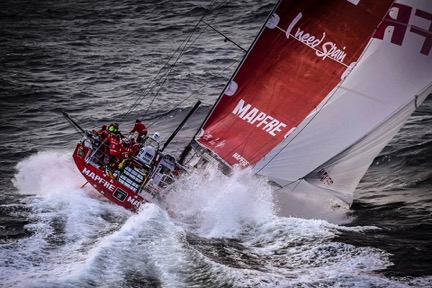 The Volvo Ocean Race is often described as the longest and toughest professional sporting event in the world, sailing’s toughest team challenge and one of the sport’s Big Three events, alongside the Olympics and America’s Cup. During Christmas, the seven 7 teams will be crossing the Southern Ocean braving cold weather, huge waves, and howling winds.

Annie Lush on Team Brunel has a serious back injury, the main sail on Team AkzoNobel has ripped off of the mast, and the Spanish Team Mafre has just taken over the lead. Team Vestas, skippered by Charlie Enright of Bristol, Rhode Island, sits in 114 nautical miles behind the leader.

In 2017-18, there is a renewed emphasis on the Southern Ocean where the sailors are now and a new set of rules too – incentivizing mixed crews of male and female sailors and more strategic innovation out on the racecourse.

The race comes to Newport RI in May. Watch these videos to see just how rough the southern ocean really is.

Check out her winning run.

Ski and Ride in Southern New England this holiday

Mt. Southington in Connecticut is off to a great start.

Enjoy winter close to home at Blue Hills in Canton. They will be open for the holidays. This is where I learned to ski!

Check out Edging the Xtreme with Dan Egan, Friday and Sunday at 7 p.m., powered by Killington, Elan, Nashoba Valley, and Debello Ski Boots, only on RadioBDC.

Enter to win tickets to see Trio Da Kali at The Villa Victoria Center of the Arts (Newton, MA) on April 10th. END_OF_DOCUMENT_TOKEN_TO_BE_REPLACED

END_OF_DOCUMENT_TOKEN_TO_BE_REPLACED

Enter to win tickets to Rhye at The Paradise on February 28th. END_OF_DOCUMENT_TOKEN_TO_BE_REPLACED

Click here to see where we’ll be the rest of the season! END_OF_DOCUMENT_TOKEN_TO_BE_REPLACED

END_OF_DOCUMENT_TOKEN_TO_BE_REPLACED

Enter to win a pair of tickets to attend The Hess Collection Seminar and Dinner as part of Boston Wine Festival 2018 at the Boston Harbor Hotel on Wednesday, March 14th. END_OF_DOCUMENT_TOKEN_TO_BE_REPLACED

The Black and Gold continue their run tonight at TD Garden. END_OF_DOCUMENT_TOKEN_TO_BE_REPLACED

Her new album has been pushed back, but we have Kimbra’s new single for you. END_OF_DOCUMENT_TOKEN_TO_BE_REPLACED