East of the Border: A Taco Tour of East Boston 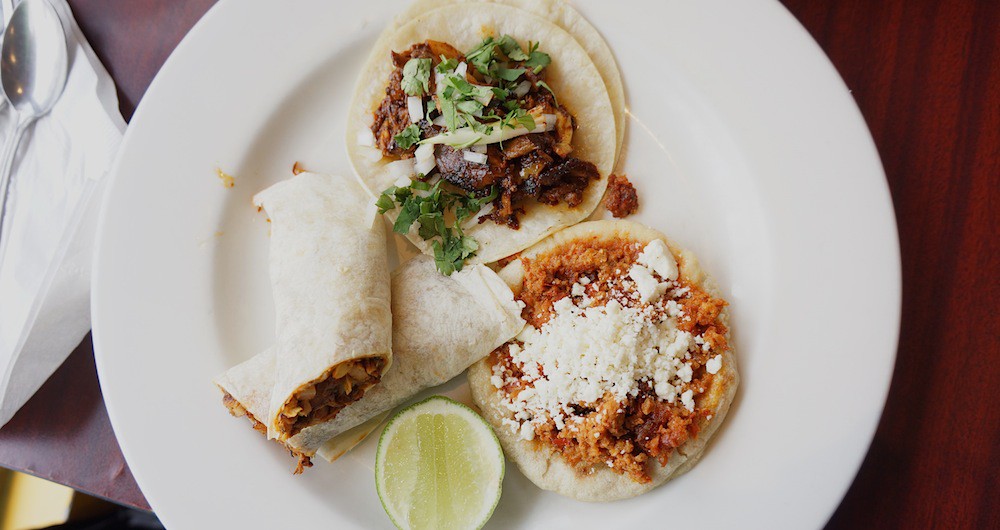 It’s amazing how easy it is to stay in whatever part of town you usually stay in. Especially in cold weather, Bostonians become creatures of habit, cycling between three or four favorite bars or restaurants as close to work or home as possible.

But spring is on the way now, longer days are imminent, and fresh lime and chopped cilantro—both zingy harbingers of summer—are excuse enough to venture out on the Blue Line for a change of scenery. After months inside, you’ll find a breath of brisk sea air the perfect appetizer for the unique combination of light and heavy, hot and cold, fresh and cooked that a good taco always is.

Here’s a handy, alphabetical guide to some of the cheap, delicious and spicy taco offerings of Eastie. It’s not comprehensive. Take it as encouragement to explore some of the ones left unexplored here (La Hacienda, Rincon Limeno, Taco Mex and Que Padre pop immediately to mind…) along with the many appealing non-taco options (like the always-packed Columbian joint Mi Rancho) that you’ll catch sight of during your East Boston meanderings. 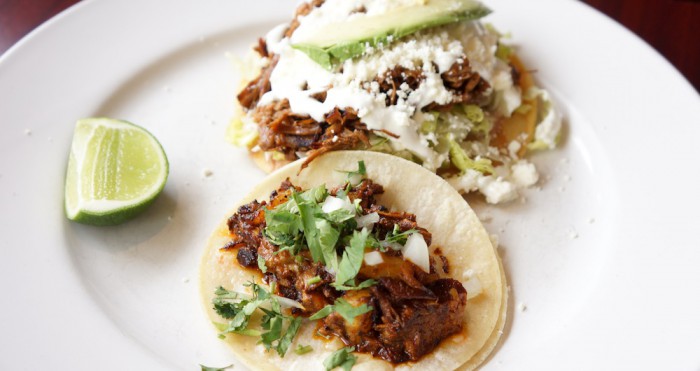 The uphill walk from the Airport stop on the Blue Line to Angela’s is completely worth it. This bright little neighborhood restaurant has a full menu of “Poblana cuisine” including some delectable looking breakfast and dessert possibilities. But if they were going to win a prize in the Eastie taco department, it would be for variety. Their lunch menu lets you order five different kinds of tacos—six kinds actually if you count flautas (which are essentially deep fried tacos.)

Another thing that differentiates Angela’s tacos from others in the area are the meat preparations. Their homemade Mexican sausage drips mesmerizing spicy red oil with every bite– it’s tough to resist sopping it up with your “extra” taco. There’s a hint of cinnamon (and possibly leek?) in their Al Pastor, but best of all, fresh pineapple. The roast pork and chicken are marinated in Adobe and some kind of very juicy mole respectively. 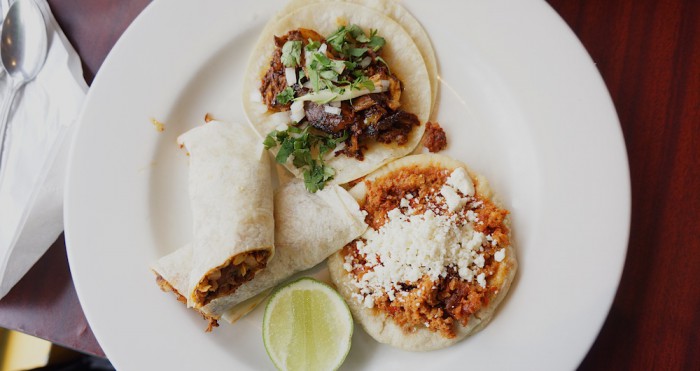 As with many full service restaurants in the area, even tacos come with complimentary homemade tortilla chips and fresh salsa—in this case, two: a smoky chipotle variety and a tangy tomatillo version. 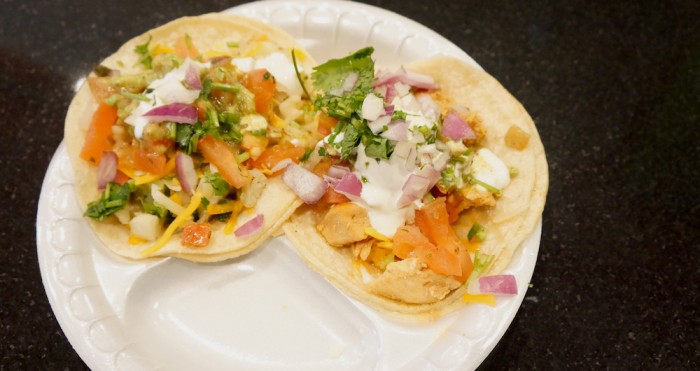 Cactus and Angela’s are sort of opposites on the ambiance spectrum. Cactus is busy and loud and crowded—at times, standing room only—and even then you may find yourself wedged between the sharp plastic handles of hastily parked baby strollers. You order cafeteria style from a steamplate line with a sizzling grill right behind it, and eat with plastic forks off of sometimes-melted styrofoam plates. But the food is quick, consistent and good (enough).

A literal stone’s throw from Maverick Station, this is the perfect dash-in, dash-out option when you just need a few tacos (or shrimp burritos, but that’s another article) to fortify you for whatever’s next.

The veggies are fresh, the sauces and sides Caribbean-style (though the ownership is decidedly Mexican/El Salvadorean) and the meat is well marinated. There’s a nice surprise here for vegetarians too: the veggie taco is not simply rice and beans. In fact, it has no rice and beans. It’s grilled cauliflower, broccoli and onion plus fresh tomato and cilantro. The cheese is nothing to write home about, but the sour cream, which is probably just regular old sour cream from the nearest market, is somehow incredibly fresh and wonderful. All tacos are $2. Just add a splash of the Chipotle-flavored Tabasco-brand hot sauce available on every table and you’re off to the races. Well, actually, the simulcasts of the races… 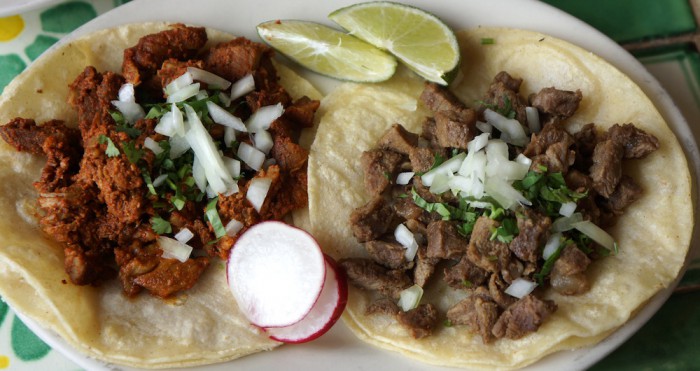 If you’ve never been out to Wood Island, be forewarned that it is not an island or very woody. But it is a treasure trove of small restaurants and bakeries competing with each other to put deliciousness into your mouth.

Jalisco is one such mouth-filling contender and if you invest a few moments of your time on Yelp or any of the local foodie message boards before you hop on the Blue Line, you’ll hear its praises sung repeatedly. People go bonkers for the weekend-only soups and the Birra (ground, spiced meat).

On a weekday at lunch time it’s quiet, warm and friendly. The oompah pulse of Norteño style Mexican music livens up a storefront that would feel like a sub shop if it weren’t populated with colorful tiled tabletops and a herd of small plastic bulls. Actually, it still feels like a sub shop, but a charming one. 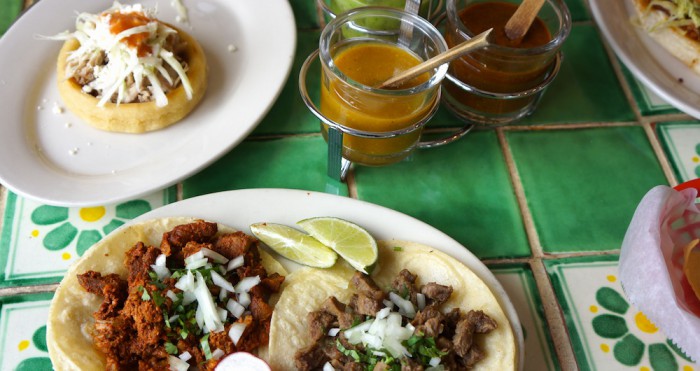 The freshly made complementary chips come with a salsa that is slighty sweet and then very spicy in that order. The tacos don’t quite live up to the online hype (though to be fair, the online hype is mostly about other menu items). The marinated pork is pretty flavorful, but the steak is on the dry side…

What’s fantastic though is a little masa cake that is billed as a special kind of taco, but is not really a taco at all. It’s more like polenta and it’s wonderful—topped with juicy pulled chicken, crisp cabbage and a some of the best farmers’ cheese I’ve ever eaten.

Also worth coming back for are the three sauces that accompanied everything. One is dark brown with deep layers of something roasted—maybe tomato, maybe peppers, maybe cocoa—delicious and mysterious. Another is fresh and bright and built on avocado. The third is yellow and tangy and absolutely tomatillo. They are beautiful to look at and to eat and compensate for the dryness of the beef. 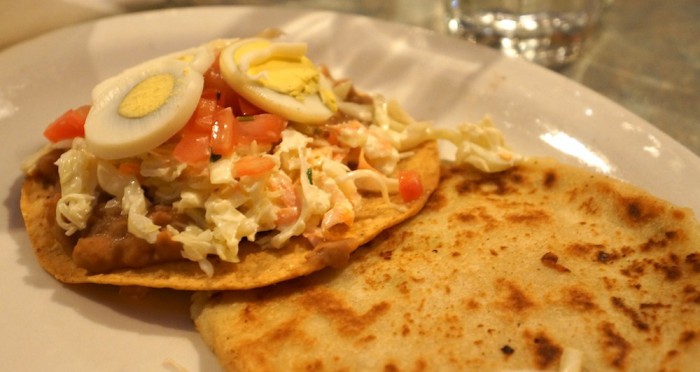 There used to be an amazing Maverick Square taco joint that was just a taco joint with a short bar inside and the same or a similar name. It closed several years ago and then reopened a few blocks over as this jaunty, (comparatively) spacious, family-friendly Mexican/El Salvadorean restaurant with good sized booths and very attentive waitstaff.

If you get anything but a taco, the portions are humongous—everything comes with at least a giant pyramid of flavorful, pea-infused rice, and usually rich pinto beans or cabbage-carrot slaw as well. 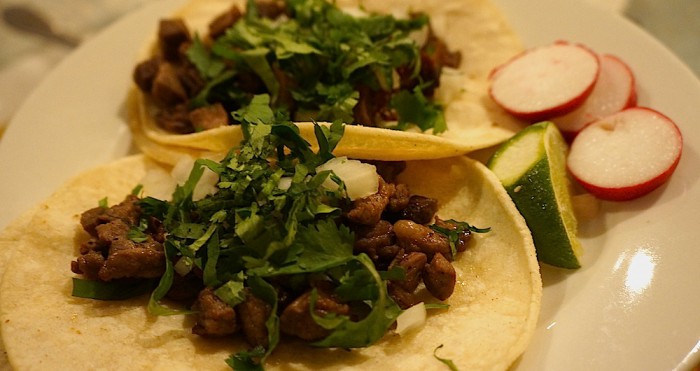 La Cancun offers a lot of taco choices: both soft corn and “crispy” varieties, and “ayote” (a Salvadorean stuffed tortilla) with more filling options than anyone else in town. They have all of the most common ones (chicken beef, tongue and pork,) plus shrimp, fish and three kinds of vegetarian. (Fried beans, or, if you get the special stuffed tortilla, you can have it stuffed with zucchini or Loroco—an edible flowering vine from Central America.)

A sampling of the pork, beef, vegetarian and shrimp tacos did not disappoint on any front. The shrimp was saucy and lettucey—sort of a spicy shrimpy salad in a taco skin. The beef and pork were both well marinated and roasted, and the veggie (beans) had the added flair of sliced egg and a different cabbage-carrot slaw (a juicier one) than the one used for making the plates fancy. 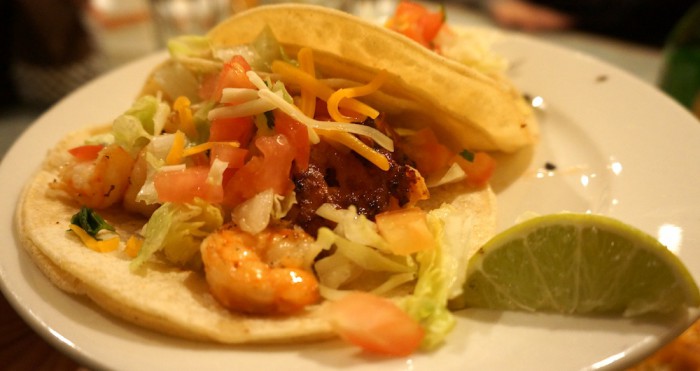 That said, the menu offers so much more than tacos that a second visit would likely not involve a repeat order.

Special stuffed and regular tacos range from $2-3. Shrimp tacos are $5, “crispy” tacos $8. A three-taco plate with rice, beans and avocado is $11. 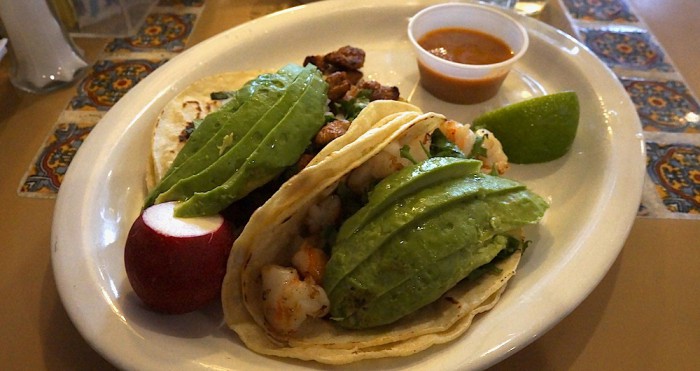 About a 10-minute walk from Maverick, the facade of this building looks like nothing: a small brick hut bearing one solitary window with bars on it. The building’s sign is so washed out that it really only reads “Mi Pueblito” if you will it to do so.

But inside everything is clean and bright. It feels a bit like entering someone’s home, albeit one with several large TVs. During the day, it’s quiet and all of the business seems to be either take-out, or extended family. Even if it’s obvious you’re not, the waitstaff welcomes you as if you were in the latter category.

Sexy latin crooners gyrate across the three large screens, out of synch with the house music being played at low volume. The room’s main soundtrack is a mellow hum of domestic-sounding chatter and occasional laughter, but there is a sense that this might be a pretty hopping cantina at night. 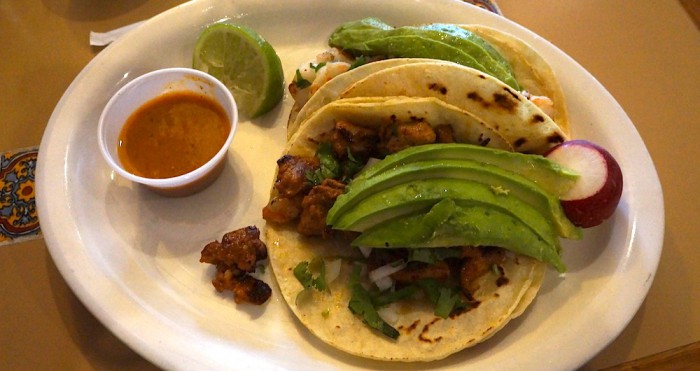 A quick glance around confirms that most patrons are there for the heavier Guatemalan/El Salvadorean fare, not the tacos, but the tacos are light and refreshing. They can be ordered with and without avocado, and “with” includes an almost shocking amount of avocado. Here, as at Cactus, a mundane ingredient reveals itself to be sublime. The folks at Mi Pueblito may have the best avocados in Boston and they are generous with them.

Despite claiming seafood as a speciality, if you discount the avocado, the shrimp tacos are run-of-the-mill. The shrimp is of decent quality but is cooked so simply, and served with so little pomp that it doesn’t stand out as anything other than a protein that is not meat. It needs something more than the cilantro and onions that top it to perk it up a bit. Lime helps, as does a splatter of the cumin-rich tomatoey salsa that accompanied the more-than-serviceable complementary chips. The abodado (pork) taco is a bit more zesty, and the tacos themselves—grilled on all sides with a very slight char—complement the flavors in the meat’s sauce perfectly.

Enter to win a pair of tickets to attend The Hess Collection Seminar and Dinner as part of Boston Wine Festival 2018 at the Boston Harbor Hotel on Wednesday, March 14th. END_OF_DOCUMENT_TOKEN_TO_BE_REPLACED

Wednesday is Food Day, after all. END_OF_DOCUMENT_TOKEN_TO_BE_REPLACED

It’s been a crazy week with all the snow. We need a drink. END_OF_DOCUMENT_TOKEN_TO_BE_REPLACED

Amazing sandwiches for a good cause? Make a bunch for us! END_OF_DOCUMENT_TOKEN_TO_BE_REPLACED

And they came to our studios, too! END_OF_DOCUMENT_TOKEN_TO_BE_REPLACED

It’s almost time send off 2017 and welcome in 2018, and we have some ideas about how you can do precisely that. END_OF_DOCUMENT_TOKEN_TO_BE_REPLACED

The pics alone will make you want to make a reservation. END_OF_DOCUMENT_TOKEN_TO_BE_REPLACED

Some people love cooking for the holidays. Others, not so much. END_OF_DOCUMENT_TOKEN_TO_BE_REPLACED

There’s so many to keep track of, you might have missed this one. END_OF_DOCUMENT_TOKEN_TO_BE_REPLACED