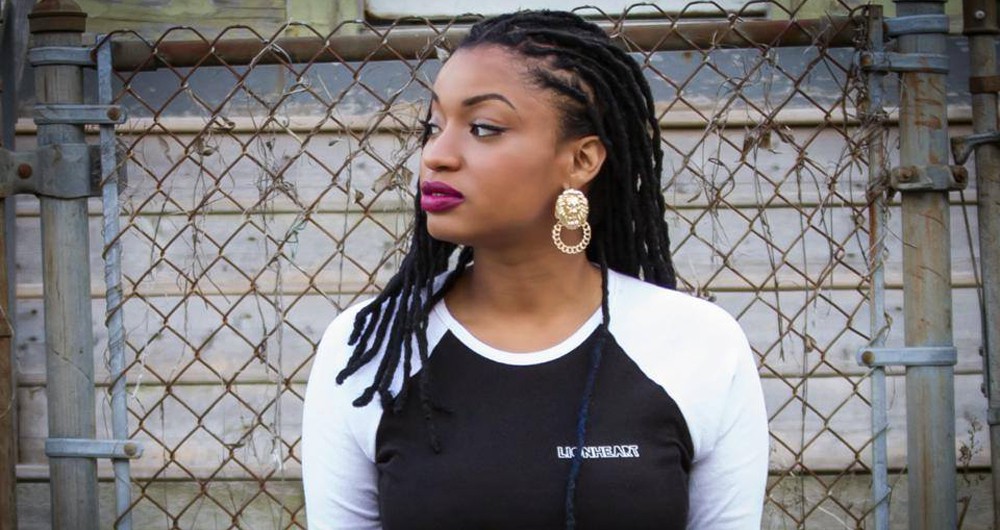 To say that Boston-bred emcee Dutch ReBelle was successful in 2014 would be a vast understatement.

The Source praised her unbridled artistry, she dug her claws in deep during an appearance on MTV’s RapFix (then used them to eviscerate the cipher), and XXL anticipated her every move. ReBelle was showered with scores of local love and even snagged a Boston Music Award for Hip Hop Artist of the Year. The accolade seemed more than fitting: 2014 was indeed the year of ReBelle. How does she summarize a period where everything in her career was metaphorically bursting at the seams? “I’ve been trying to get everyone’s attention for a while and it was like they all looked at me at the same time.”

ReBelle Diaries—her sophomore album—certainly gives listeners something to savor. Not only is it cloaked in deep verses; it corrodes ears with its decisive and indulgent ambition. ReBelle knows she is exactly where she needs to be. Diaries is wordy, wry, and anchored in poetic clarity. She can proclaim her aptitude for the ethereal on “Goddess” and yet still deliver a straight up club banger with “Yen” all on the same record. Both are wrought with the same sophisticated incursions of rhythm and repetition.

According to the rapper, every cut on Diaries is true to who she is. “I got love for any female who performs and reps herself. But I like content—if I can’t connect with what you’re saying then I don’t want to hear it. Everything in my songs happened. If it’s about going to college or getting arrested with some knuckleheads, it’s all true.” This authenticity seeps into her live performance, where ReBelle’s urgent passion for hip-hop is eclipsed by the truth-attack introspect that is her lyricism.

“Honestly, I have a theory: everything in life is a movie, regardless of whoever you believe the scriptwriter to be. You’re just playing your role and that’s all that I’m doing.” She ties this into the subject at hand. “I’m commanding the room because I’m a female doing hip-hop—you’re going to pay attention. My mother always told me that you can’t be afraid to fail. You only mess up when you show them you mess up. I know that you might like it. I know you might not. I’m going to be who I am and have a good time no matter what.” When reminded of her recent Boston Music Award win, she is unsurprisingly humble. “I’ve said thank you and ended up giving it to my mom. I don’t get caught up in awards because that’s not the point. I really appreciate just being nominated.” She soon becomes dreamingly pensive about her journey.

“All the things that came before—being featured in the Metro, doing the cover of Improper Bostonian, certain videos being sent to MTV—meant more to me. I felt like I won before I even got [to the Boston Music Awards]. The BMA was for the city, not me.” ReBelle’s sights are undoubtedly set on achieving even more success in 2015, but she’s relying on simplicity in her approach. “I plan to keep doing what I’ve been doing,” she says confidently. “I’m just super excited to be working with new talent and trying new things. I always tell people don’t put me in a box—I’ll blow it up.”

Enter to win a pair of tickets to attend The Hess Collection Seminar and Dinner as part of Boston Wine Festival 2018 at the Boston Harbor Hotel on Wednesday, March 14th. END_OF_DOCUMENT_TOKEN_TO_BE_REPLACED

Perry Eaton writes for Boston.com. Perry Eaton talks on the radio with me from time to time. Today, he talked to me about what he’s been listening to and some upcoming shows and festivals worth checking out. Click here to read more. END_OF_DOCUMENT_TOKEN_TO_BE_REPLACED

Boston band Funeral Advantage is Tyler Kershaw. And Tyler Kershaw had a fun childhood, so it seems. END_OF_DOCUMENT_TOKEN_TO_BE_REPLACED

Perry put me on to daephne and the album blew my mind. END_OF_DOCUMENT_TOKEN_TO_BE_REPLACED