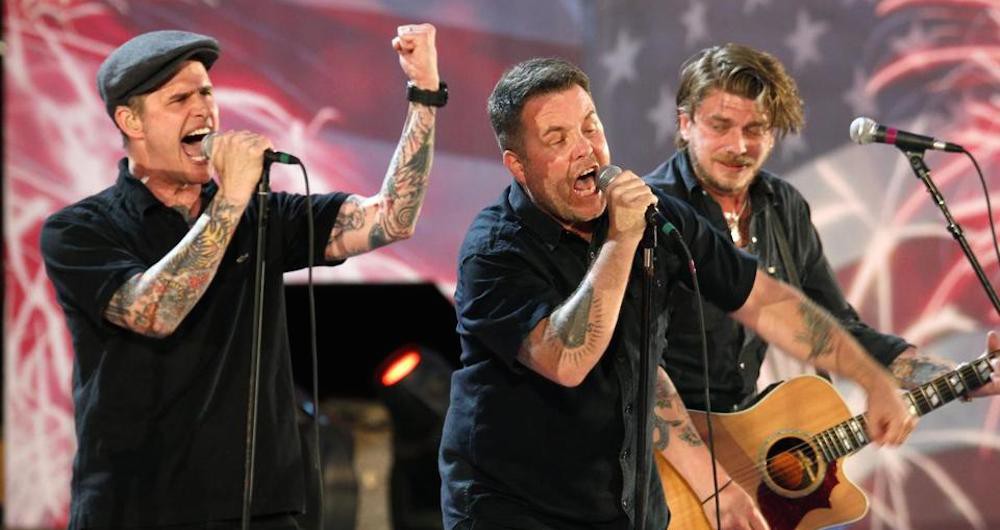 Boston punk rockers the Dropkick Murphys have seen their song “I’m Shipping Up to Boston” become a staple of Boston sporting events, then rise to national prominence when it was featured in The Departed. But the band took issue when their Boston anthem was used at a political event by Wisconsin Governor (and likely 2016 republican presidential candidate) Scott Walker, and they took to Twitter to express their extreme displeasure.

Lest you think Dropkick is getting mad for no good reason, Scott Walker and his Koch Brothers-supported cohorts in the Wisconsin legislature have been put on blast by the band before for using their song.

The band has repeatedly voiced their blue-collar, pro-union status over the years, even releasing a song and selling t-shirts in support of the Wisconsin protestors in 2011 after Governor Walker took away the right to collectively bargain for unions. The band also released a statement in February 2011 declaring solidarity with state union members.

“[We] would like to take a moment to acknowledge the struggles of the working people of Wisconsin and to pledge our support and solidarity by releasing the song ‘Take Em Down’ from our upcoming album. We think it’s appropriate at the moment and hope you like it… The Dropkick Murphys Stand With Wisconsin!!!!!”

Then in 2012, the band issued a strongly worded Facebook post after Wisconsin State Rep and union-crushing Walker ally Scott Fitzgerald used “Shipping Up to Boston” at a Wisconsin GOP convention in Green Bay.

You would think four full years of expressing their displeasure with union-busting Wisconsin politicians using their song would give the Dropkick Murphys some sway, but this latest incident proves otherwise.

For a supposed pro-business Governor, Walker has had an interesting relationship with businesses in Wisconsin. He rejected $810 million in federal stimulus money for a high-speed rail connecting the state to the rest of the Midwest.

Then, after promising to upgrade existing train lines rather than accept almost a billion towards new technology, he reneged on a signed contract with the train manufacturer Talgo, who is now suing the state for $66 million on top of the $52 million the state already paid the company for the now incomplete train upgrades. All of this because Walker said the $7 million in annual train maintenance for the next 15 years would be too great a burden on state taxpayers.

Thanks to Walker’s policy decisions, anyone thinking about shipping up to Boston from Wisconsin should probably take a bus.

Enter to win tickets to see Trio Da Kali at The Villa Victoria Center of the Arts (Newton, MA) on April 10th. END_OF_DOCUMENT_TOKEN_TO_BE_REPLACED

END_OF_DOCUMENT_TOKEN_TO_BE_REPLACED

Enter to win tickets to Rhye at The Paradise on February 28th. END_OF_DOCUMENT_TOKEN_TO_BE_REPLACED

Enter to win a pair of tickets to attend The Hess Collection Seminar and Dinner as part of Boston Wine Festival 2018 at the Boston Harbor Hotel on Wednesday, March 14th. END_OF_DOCUMENT_TOKEN_TO_BE_REPLACED

Her new album has been pushed back, but we have Kimbra’s new single for you. END_OF_DOCUMENT_TOKEN_TO_BE_REPLACED

The folk duo returns with a new record this week. END_OF_DOCUMENT_TOKEN_TO_BE_REPLACED

Now that we’re done looking back at 2017, let’s look ahead at 2018. END_OF_DOCUMENT_TOKEN_TO_BE_REPLACED

Our first Song of the Week for 2018. END_OF_DOCUMENT_TOKEN_TO_BE_REPLACED