What not to wear: Here are the too-popular Halloween costumes in Boston 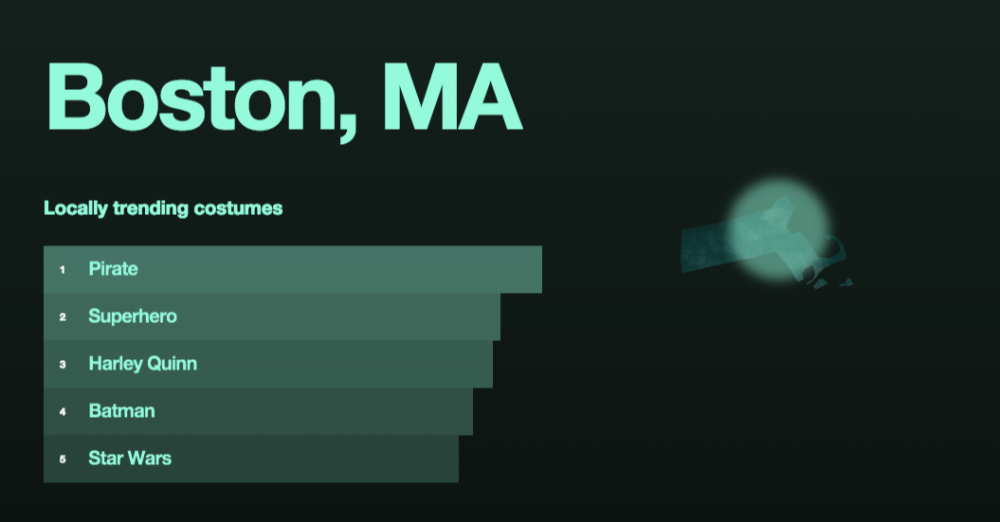 Picture day. Your wedding. Halloween. There are certain days when it really sucks to show up to an event and realize you’re matching outfits with a bunch of other people.

Thanks to Google’s new Frightgeist feature, you can check to see which costume ideas are trending in Boston to avoid being matchy-matchy with a bunch of other citygoers.

According to Frightgeist’s about page, the Google News Lab determined the costume trends in each major city by analyzing data found in some of Google’s 300 billion daily searches.

“Pulling from the top 500 costume searches in the United States, Frightgeist uses Google Trends to tell you what’s trending at a costume party near you and help you find a costume that’s sure to turn heads – if they have them.”

So what’s Boston’s most popular costume idea so far this year?

Other popular costume contenders in Boston are Superhero, Harley Quinn (which is the top-trending costume in the country right now), Batman (Ben Affleck would be proud), and Star Wars.

Frightgeist can also tell you the other cities that favor your top-ranking costume. Other than Boston, Pirates are taking over in Alaska, Alabama, and upstate New York.

If your costume is on this list, don’t worry–there’s plenty of places in town you can get a different getup last minute. You can head over to Boston Costume in Cambridge, which is open until midnight every day in October, or Party City on Boylston street. Or you can DIY your very own Boston-themed costume, none of which are on the Frightgeist. We checked.