Melissa Dohme arrived at the Tampa Bay Rays game on Monday night expecting to throw out the first pitch.

Just as Dohme was getting ready to wind up, her boyfriend, Cameron Hill, ran on the field with a baseball.

It had four words written on it: ““Will you marry me?”

She said yes, and the two Florida natives embraced. It was quite a journey to get to Tropicana field.

Hill and Dohme first encountered each other in early 2012, when Hill was one of the firefighter-paramedics to rescue Dohme in Clearwater after she had been stabbed 32 times by her ex-boyfriend.

“For some reason, I didn’t think it would be the last time I was going to see her.” Hill told the Tampa Bay Times in 2013.

Dohme’s ex-boyfriend Robert Lee Burton Jr. has since pleaded guilty to attempted murder and has been sentenced to life in prison without parole. Dohme made an incredible recovery in spite of nerve damage, and went on to travel Europe and earn her nursing degree.

When speaking at a church in fall 2012, Hill and another first responder visited Dohme, and the pair were seeing each other by the end of that year. She’s now a representative for Hands Across the Bay, a nonprofit benefitting Tampa Bay families.

Dohme says that she is no longer resentful of the 2012 attack, “because I met Cameron out of it.”

All in all, seems like it was a pretty good night. 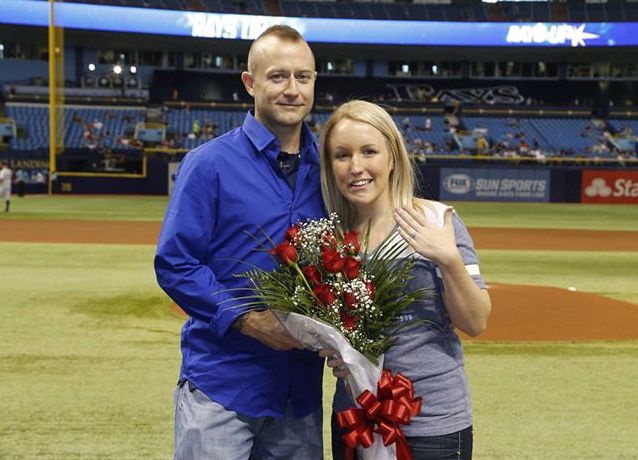