Do Women in Vermont Like Drew Brees More Than Tom Brady? This Map of Female Jersey Sales Says Yes

Dick’s Sporting Goods released an infographic showing the top-selling female NFL jerseys for each state from May to October 2014. And while Tom Brady was the top seller in four states, Vermont ladies seem to prefer New Orleans Saints quarterback Drew Brees. But why? 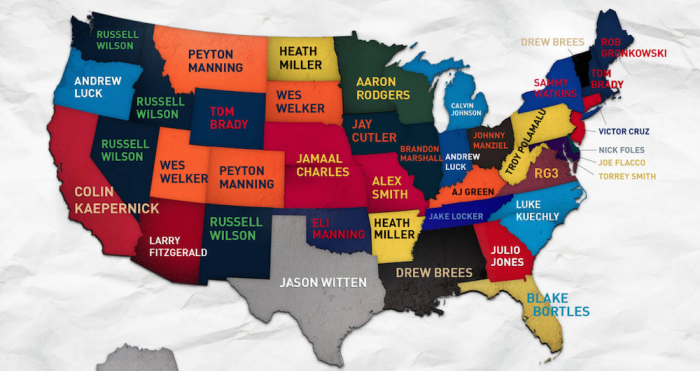 The simplest explanation is that Brees is a quarterback with national appeal whose jersey sells well nationwide. Tom Brady is the top jersey-seller in Wyoming, after all, and that’s hardly Patriot Nation West. In fact, Brees and Brady have a very similar selling pattern: both are the top sellers in three states that would normally root for their team (Louisiana, Mississippi, and Alabama for Brees; Massachusetts, New Hampshire, and Rhode Island for Brady) and one state with a minuscule population (Vermont has just under 627,000 people, while Wyoming has under 583,000, according to 2013 US Census data).

With those population numbers in mind, it’s easy to see how the numbers can be skewed. How many women in Vermont bought a football jersey at all over the last six months, much less at one of the two Dick’s Sporting Goods stores in the entire state? Jerseys aren’t typically a yearly purchase, either. I think it’s safe to assume that this Vermont anomaly is more an issue of sample size and less an issue of Vermont women defecting to the NFC South.

Meanwhile, it’s also safe to assume Rob Gronkowski is Maine’s biggest seller because bears are statistically less likely to attack someone if they believe that person is Rob Gronkowski.

Enter to win a pair of tickets to attend The Hess Collection Seminar and Dinner as part of Boston Wine Festival 2018 at the Boston Harbor Hotel on Wednesday, March 14th. END_OF_DOCUMENT_TOKEN_TO_BE_REPLACED

The Black and Gold continue their run tonight at TD Garden. END_OF_DOCUMENT_TOKEN_TO_BE_REPLACED

Who will make the Class of 2018? END_OF_DOCUMENT_TOKEN_TO_BE_REPLACED

It’s been awhile since we talked Black and Gold. END_OF_DOCUMENT_TOKEN_TO_BE_REPLACED

You’re going to wish you were in the Northern Alps. END_OF_DOCUMENT_TOKEN_TO_BE_REPLACED