Did ‘Saturday Night Live’ Steal a Sketch From An LA Comedy Duo?

Now in its 40th season, “Saturday Night Live” is no stranger to controversy. But most of those controversies stem from racy content or a lack of diversity, not accusations of plagiarism. Yet that’s the issue facing the sketch show today, after two members of the legendary LA sketch group the Groundlings posted a video clip of their sketch “Rollin’,” noting its similarity to an SNL sketch from this past weekend called “River Sisters.”

“Noting its similarity” is putting it lightly. On first look, these two sketches are almost identical. Unfortunately, licensing issues for the use of Creedence Clearwater Revival’s “Proud Mary” means Hulu didn’t post the River Sisters sketch online, but here’s a link to part of the sketch. In the meantime, let’s do a side-by-side comparison of the sketches. 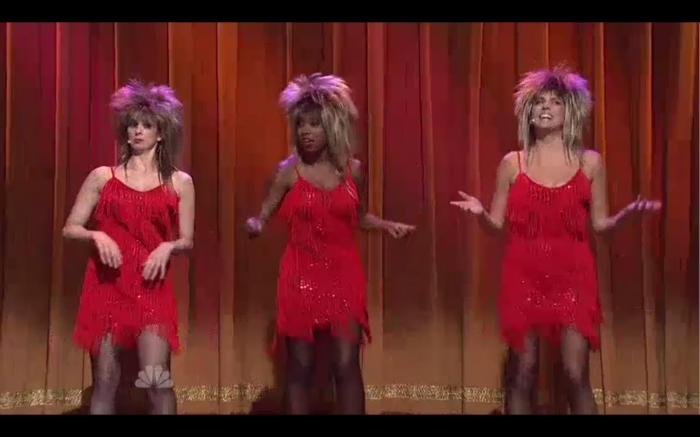 Vanessa Ragland and Kimberly Condict play down-on-their-luck Tina Turner impersonators doing a variety show on a river cruise. Each of the– yeah, it’s the same damn thing, down to the use of “Proud Mary.”

To say that this seemingly open-and-shut case of plagiarism makes no sense would be putting it lightly. Other than Chicago’s Second City, no other theater has provided “Saturday Night Live” with more cast members than Groundlings. Beyond legendary members like Will Ferrell, Phil Hartman, and Kristen Wiig, current cast member Taran Killam and staff writer Mikey Day are Groundlings alumni. Why would the show steal wholesale from such a well-known sketch school, one that has provided the show with so much of its talent?

If this is a case of parallel thinking — which is actually quite common in comedy — it’s the strangest, most specific one we’ve ever seen. This isn’t like when “SNL” faced accusations of stealing a sketch from “Tim & Eric, Awesome Show, Great Job!” because both sketches featured absurdist comedy based around tiny hats. This is two sketches with the same characters, same conceit, and even the same classic rock radio staple as a musical cue.

“Saturday Night Live” has not commented on the controversy, but we will update this story if and when they do.

Comedian Myq Kaplan is a comedian named Myq Kaplan. He joined me in studio this afternoon, and he’s at Laugh Boston this weekend. Click here for tickets. END_OF_DOCUMENT_TOKEN_TO_BE_REPLACED

My goodness, I love Sue Costello. It was great having her back in studio today to talk about her one-woman show, #IAmSueCostello, playing tonight at the Revere Hotel. Click here for tickets. END_OF_DOCUMENT_TOKEN_TO_BE_REPLACED

Trump Takes On…Boston! is running now through election night at Laugh Boston. David Carl was back in studio this afternoon to talk about bringing Donald Trump to the stage, the cathartic element (for both him and the audience) and how audiences have been reacting so far. END_OF_DOCUMENT_TOKEN_TO_BE_REPLACED

Trump Takes On…Boston! has arrived at Laugh Boston. I had comedian David Carl, who is portraying Trump, in studio this morning to talk about the show. END_OF_DOCUMENT_TOKEN_TO_BE_REPLACED

Lachlan Patterson made me laugh this morning. Let him make you laugh this weekend at Laugh Boston. Click here for tickets, and click “more” to hear our conversation. END_OF_DOCUMENT_TOKEN_TO_BE_REPLACED

Always a pleasure to have Boston.com’s Perry Eaton in studio for a chat. After we talked a bit about Pearl Jam at Fenway and Perry’s new podcast, he filled us in on Game of Thrones live and Narragansett’s new Bananagrams-themed brew. END_OF_DOCUMENT_TOKEN_TO_BE_REPLACED

It was great to have Alonzo Bodden back in the RadioBDC studio this morning. Don’t miss him at Laugh Boston this weekend! Click here for tickets and info, then click through to hear my interview. END_OF_DOCUMENT_TOKEN_TO_BE_REPLACED