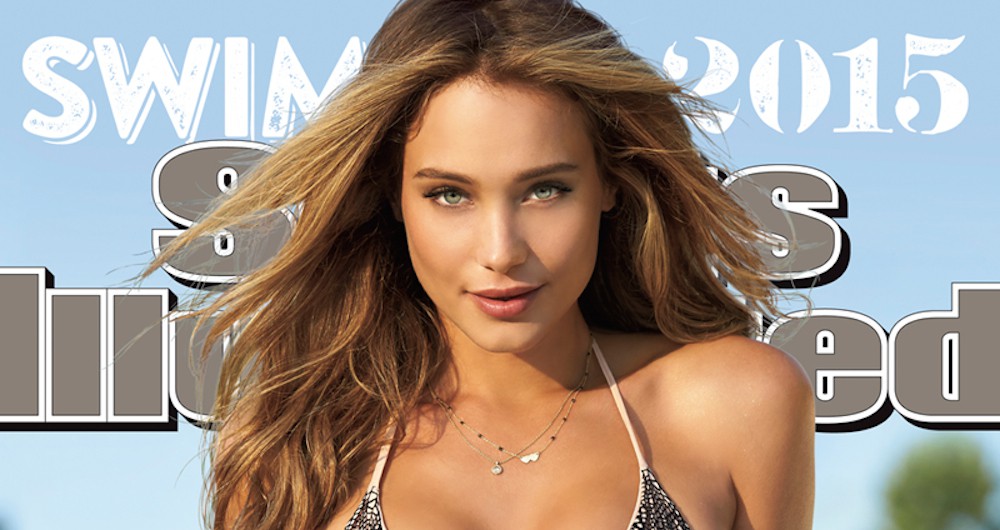 Why is Hannah Davis wearing a bikini on a farm in Tennessee? And why is the 24-year-old model dating a balding 40-year-old man with bad ankles? Shut up, the Swimsuit issue isn’t meant for brains.

This year’s cover is graced by the Davis, who has appeared in the issue twice before, but was given the much sought-after honor of cover girl for 2015. Davis has previously modeled for Victoria’s Secret, American Eagle, Tommy Hilfiger and Levi’s.

“I gave her a hug and the only words she could get out were, ‘Are you sure? Is it definitely printed already,'” SI assistant managing editor MJ Day said in a statement. The publication also released a video of the young model, who dates longtime New York Yankees shortstop Derek Jeter, reacting to the cover for the first time.

The Swimsuit issue has never been famous for empowering women, but 2015 marks the first time that a plus size model appears in the issue. Granted, she’s in an ad, not the main lineup, but model Ashley Graham and the swimsuitsforall campaign is getting some rightfully deserved press for pushing the new #CurvesInBikinis initiative. Add that to the successful Always #LikeAGirl Super Bowl commercial and it lends a little hope – maybe next year, curvy women will escape the advertisements to be included in an official SI spread.

Though the issue isn’t formally released online until Feburary 9th and on newsstands February 10th, the formal reveal was made on The Tonight Show with Jimmy Fallon, with the cover girl herself appearing.

Even in its 51st year, the Sports Illustrated swimsuit cover manages to stay relevant because when isn’t a bikini on a farm relevant? Exactly.

A decade of Wreck The Halls. END_OF_DOCUMENT_TOKEN_TO_BE_REPLACED

Leah Wellbaum from Slothrust brought her trusty six-string to Studio B and turned in the first RadioBDC Session of 2017. Check out her three songs and her chat with Julie Kramer, recorded live on February 28, 2017. END_OF_DOCUMENT_TOKEN_TO_BE_REPLACED

Mike McColgan and Lenny Lashley of Street Dogs were in session on November 30, 2016 to play three songs and chat about their annual Wreck The Halls shows at Brighton Music Hall December 15-18. END_OF_DOCUMENT_TOKEN_TO_BE_REPLACED

Tegan and Sara stopped by for a chat before their House of Blues show on Halloween night. END_OF_DOCUMENT_TOKEN_TO_BE_REPLACED

The sultry boom of Ruby Rose Fox rounded out a summer of sessions in Studio B presented by FindMassMoney.com. Enjoy the videos and Ruby’s chat with Julie Kramer. END_OF_DOCUMENT_TOKEN_TO_BE_REPLACED

Always a pleasure to have Boston.com’s Perry Eaton in studio for a chat. After we talked a bit about Pearl Jam at Fenway and Perry’s new podcast, he filled us in on Game of Thrones live and Narragansett’s new Bananagrams-themed brew. END_OF_DOCUMENT_TOKEN_TO_BE_REPLACED

She is Dee Dee from the Dum Dum Girls no longer. She is now Kristin Kontrol, and she played a short set for us in Studio B on June 17, 2016. END_OF_DOCUMENT_TOKEN_TO_BE_REPLACED