Derek Jeter is retiring. We still hate him, right? Or do we?

Let’s get this out of the way early. Derek Jeter does not suck. But it’s a tradition for Red Sox fans to let him know that we think otherwise (or at least hope otherwise). With news that the Yankees legend has announced that 2014 will be his last season, why don’t we seize this opportunity, one last time, to let Derek Jeter know how much we think he sucks. Here are our reasons. And he deserves it, right? …right?

No Red Sox fan looks back on Oct. 16, 2003, with fond memories. Aaron Boone’s walk-off home run in the bottom of the 11th in Game 7 of the ALCS was probably the apex of fiery rage that any Red Sox fan has experienced since the mid-’80s. It was so bad, in fact, that it was one of those moments where nobody cared how “classy” Jeter was or “what a good guy” he was. He didn’t hit that home run, but the devastation that it provided was bad enough so that anyone wearing pinstripes was the devil. 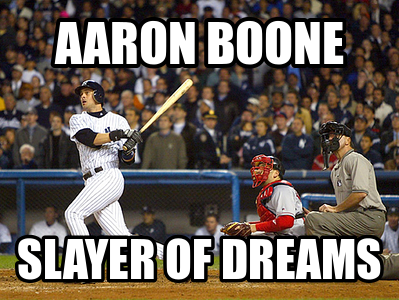 Any acquaintance of that suck-bag sucks at least a little bit, too. Nobody likes Alex Rodriguez anymore, not Yankees fans, but there was a time when Yankees fans had to at least pretend. Even A-Rod’s teammates had to pretend to like him, especially Captain Jeter. That must make Derek suck a little too, right?
Yeah, he may be Derek Jeter, but HE AIN’T NOMAH!!! The Red Sox faithful can tirelessly argue that in the shortstop heyday of the late ’90s and early ’00s, Nomar Garciaparra was better than Jeter, but does it really matter? Jeter is still playing and Nomar retired five years ago. Jeter has five rings and Nomar has one. We still miss you though, Nomar. You ruled.
That Jeter was such a loudmouth! Oh wait, no he wasn’t. But he was damn ugly! Nope, he’s actually quite an attractive dude. Yeah, but he sucks at baseball! Hmm, 13 All-Star games and five Gold Gloves. He plays for a really shitty organization though! One that has won five World Series titles since he joined the team. Well, he must treat women like crap then! Funny, he actually gives women autographed gift baskets after he hooks up with them. Give it a rest, Sox fans. Jeter was the man. The only thing that sucks is that he had to play for the Yankees.
passionately exclaim “Yankees suck!” because we were uncreative and that seemed like it cut deep (for some reason). We’ve long forgotten how enraging it was hearing Yankees fans chant “Who’s your daddy?” at Pedro, and thinking that Pedro definitely went a little too far when he bowled Don Zimmer across the Fenway sideline in one of the dirtiest moments of the rivalry. Mariano is retired, as are Clemens and Petite. No more Nomar, and Pedro, Schill, and Trot are history as well. We can now officially close that door with the departure of Derek Jeter.