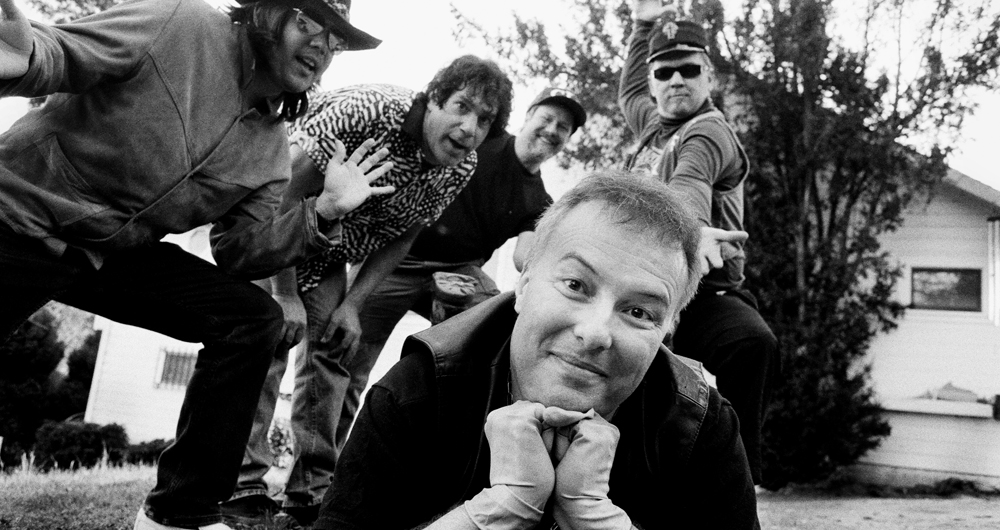 Six years ago, I wrote a piece on a since-defunct ska-punk band called Have Nots. Midway through the short feature, guitarist Jon Cauztik opines, “If you’re a punk band and you’re not political, you’re a speed-pop band. Sorry.” He later regretted saying that because subsequent interviewers kept asking him for clarification. Having to explain himself over and over got irritating. But of course rock reporters wanted to talk more about that idea.  Its accuracy hinges on how we’re defining “punk,” and trying to nail down what “punk” means used to be fun. Granted, the prospect of trying to define “punk” in 2014 makes me want to shove a knitting needle through my ear canal. But Jello Biafra and the Guantanamo School of Medicine’s approaching gig at the Brighton Music Hall has me revisiting that old quote. Even if Cauztik was technically wrong, maybe he should have been right.

To recap the bullet points of Biafra’s career: the relentlessly progressive shrieker co-founded the indispensable Dead Kennedys in the late ‘70s. In 1986, DKs dissolved amid litigious hooey – a dubious and failed charge of “distributing harmful materials to minors” – brought about by Tipper Gore’s old pro-censorship committee, the Parents Music Resource Center.

Biafra spent the years following DKs’ imposition cultivating a spoken word career and collaborating with the likes of the Melvins, Nomeansno, Ministry, and Mojo Nixon. The other three DKs guys – East Bay Ray, Klaus Flouride, and D.H. Peligro – did squat until the late ‘90s when they successfully sued Biafra and their erstwhile label Alternative Tentacles for the rights to all the old DKs music. Biafra claimed the DKs guys are greedy jerks who wanted to cash in their legacy and license classic anti-establishment anthems for Levi’s commercials and things of that nature.

Since then, the 3/4th reunited DKs have toured with a series of hired gun surrogates who barked about Ronald Reagan and “The Dukes of Hazzard” to audiences of 13-year-old neophyte punks who have no reason to care about either of those things are. Meanwhile, Biafra projects have been a better option for aspiring hooligans preferring to hear songs well-within the vein of DKs that extol Occupy and call bullshit on the mostly-broken promise of the Obama Presidency – or address anything that has anything to do with life as we currently know it.

How’s this for an allegory: Y’know how “South Park” remains worth watching eons after the shock value wore off, because at some point Matt Stone and Trey Parker decided to go topical? Jello Biafra does with punk rock, which also isn’t shocking anymore.

Although, Biafra hasn’t switched to more germane targets so much as protest the modern versions of the same big bads from back when. On last year’s “White People and the Damage Done,” his trademark trill of fury flames right-wingers, useless establishment liberals, our collective slack-wit obsession with celebrities, money junkie Wall Street sociopaths, and the corporate monoliths who have taken all our money and will probably eventually destroy the Earth and kill most of us.

I’m not sure if “Holiday In Cambodia” carries much gravitas now that Pol Pot’s been dead for 16 years. But Biafra’s unwavering outrage has kept his music relevant long after DKs – not to mention any number of other middle-aged punk rockers on greatest hits tours – ceased to be interesting.

So maybe Cauztik was spot-on with his speed-pop comment. At this point – when the spikey hair, patch jackets, and three-chord routine has been trite for decades – does punk without politics matter at all?

Enter to win tickets to see Trio Da Kali at The Villa Victoria Center of the Arts (Newton, MA) on April 10th. END_OF_DOCUMENT_TOKEN_TO_BE_REPLACED

END_OF_DOCUMENT_TOKEN_TO_BE_REPLACED

Enter to win tickets to Rhye at The Paradise on February 28th. END_OF_DOCUMENT_TOKEN_TO_BE_REPLACED

END_OF_DOCUMENT_TOKEN_TO_BE_REPLACED

Enter to win a pair of tickets to attend The Hess Collection Seminar and Dinner as part of Boston Wine Festival 2018 at the Boston Harbor Hotel on Wednesday, March 14th. END_OF_DOCUMENT_TOKEN_TO_BE_REPLACED

Her new album has been pushed back, but we have Kimbra’s new single for you. END_OF_DOCUMENT_TOKEN_TO_BE_REPLACED

The folk duo returns with a new record this week. END_OF_DOCUMENT_TOKEN_TO_BE_REPLACED

Now that we’re done looking back at 2017, let’s look ahead at 2018. END_OF_DOCUMENT_TOKEN_TO_BE_REPLACED