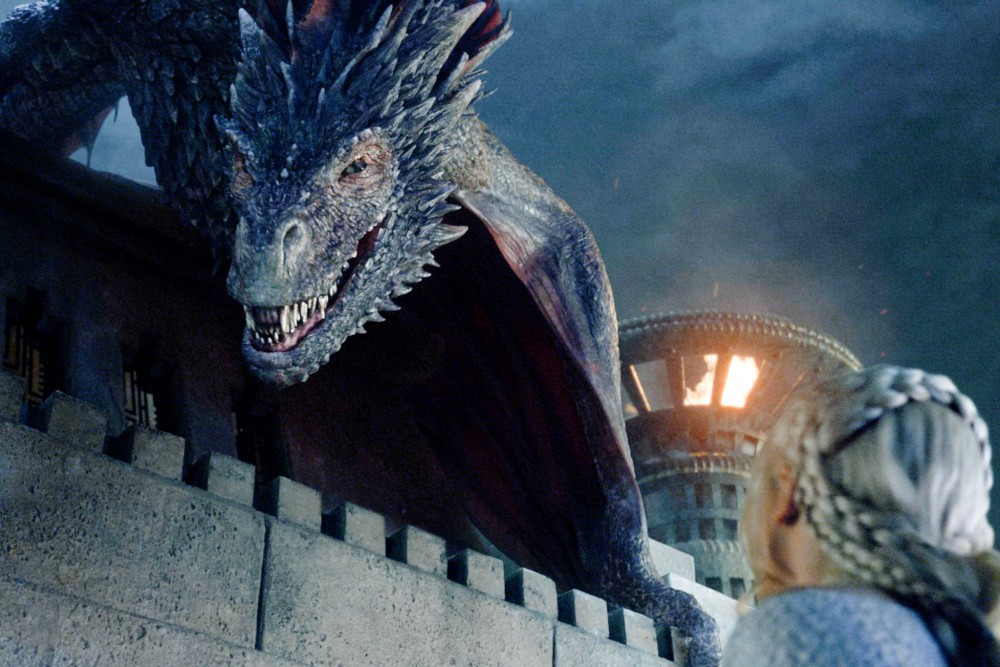 SPOILER ALERT: Major plot points of Sunday night’s episode of Game of Thrones are revealed in this post.

Daenerys has a lot on her mind but it was someone else who lost their head during Sunday’s episode of Thrones.

As seen in the season five premiere, the golden harpy has been pulled down from the Great Pyramid of Meereen: about as symbolic a gesture as possible to let the people know that Daenerys wants both change and control over her newest stomping grounds. Though she has the support of her advisers and her Unsullied army, not everyone is as eager to honor the Mother of Dragons. The Sons of the Harpy, to be specific.

The Sons are a pro-slavery, anti-Daenerys insurgency. It was a Son of the Harpy who slit White Rat’s throat in last week’s premiere, leaving behind a tell-tale gold harpy mask to make it clear who was responsible for the murder.

After White Rat’s killer was captured, Daenerys met with her advisers and decides a fair trial of this Son of the Harpy is necessary. But it wasn’t long before Mossador, a former slave and confidante of Daenerys, goes to where the Son is being held and kills him when he says that she does not belong in Meereen and will never be their “mhysa.” Their mother.

Kneeling before her throne, Mossador stresses to Daenerys that he killed the Son for her. In the past, Daenerys may have let his wrongdoing slide. But, after she and her advisers decided on going through with a trial, Barristan Selmy took Daenerys aside and reminded her of a specific corrupt leader.

“Your father, the Mad King,” Selmy said. “I served in his guard. When the people rose and rebelled against him, he burned men alive with wildfire and laughed as they screamed. His efforts to step out dissent led to rebellion.”

After Daenerys stressed that she is not like her father, Selmy replied, “No, your Grace, thank the gods. But the Mad King gave his enemies the justice he thought they deserved and each time it made him feel powerful and right until the very end.”

Terrified of appearing as unjust as her father, Daenerys knows what she must do. “The law is the law,” she says as she tells the guards to take Mossador to his death.

Daenerys appears before her people to say that a man awaiting trial was killed and that the punishment for this crime is death. Shocked, the ex-slaves of Meereen shout “Brother! Brother!” when Mossador is led out in shackles by Unsullied army members. As cries of “Mercy!” get louder from the crowd below, Daenerys’ once-steely demeanor falters as she looks at Mossador. But, with her nod of approval, a scythe cuts off his head.

Outraged, the ex-slaves begin to hiss from all sides of Daenerys and fight the Unsullied—hurling rocks and throwing themselves into them. Daenerys is able to get away and her advisers offer to stand guard outside her door that night but she tells them to leave.

Walking out onto her balcony, Daenerys hears something behind her. Drogon, the goat-roasting, goatherd’s daughter-killing dragon is back. Fully grown, Daenerys looks at him with both fear and sadness in her eyes. She stretches out her hand and, compared to the fiery exchange with her other two dragons in the series premiere, shares a very tender moment before he flies away. Exercising about as much control over Drogon as she does over Meereen.