A dad who gained brief Internet exposure because of his extreme anti-bullying techniques turns out to have posted Nazi images on his Facebook page.

Timothy S. Robenhorst received many media mentions – including on this site – after he gave his son a series of harsh penalties to punish him for bullying, among them making the boy hold a sign that listed his punishments. The image quickly went viral.

A bullying expert quoted by BDCwire Thursday questioned the value of such parenting techniques. But questions about Robenhorst’s parenting were quickly replaced by questions about his positions on race when it turned out that photos in his Facebook stream include swastikas and other offensive images.

BDCwire spoke to Robenhorst, who confirmed he was responsible for posting the photos. He said he sometimes uses the name “Timothy Srobenhorst,” including on Facebook.

He also used a racial slur, while denying being a racist.

Here’s our original story, as it appeared before we learned of his offensive photos:

What would you do if you found out your son was taking advantage of someone smaller than him?

Timothy Srobenhorst, a resident of Green Bay, found out his son, Kayden, was bullying a classmate at Pulaski Middle School. So he devised a unique punishment, and posted this on Facebook: 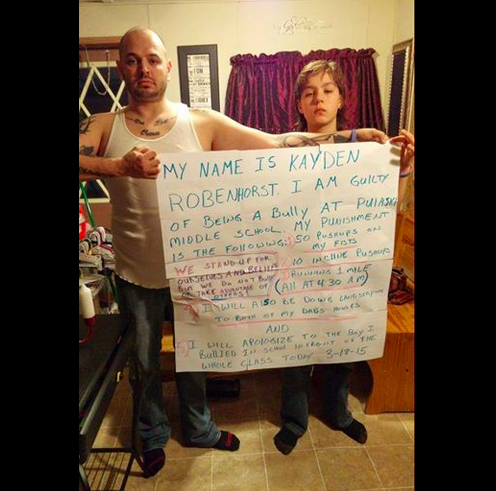 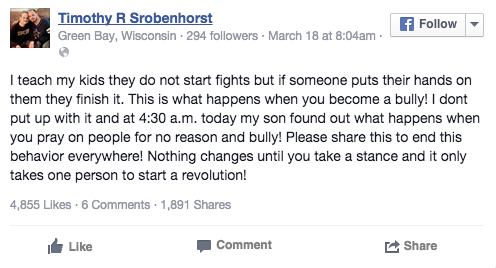 To recap, Kayden’s punishment is:

*Waking up at 4:30 a.m.
*50 push-ups on his fists
*10 incline push-ups
*A one-mile run
*Landscaping work on his dad’s two houses
*An in-person apology to the kid he bullied, in front of his whole class.

We stand up for ourselves and beliefs but we do not bully or take advantage of others!

This is a good message! Teaching your kid not to be a jerk needs to be done at an early age. Making him wake up really early in the morning to do a shame-fueled CrossFit workout will drive the point home, and making him apologize to the kid he bullied in front of all the other kids will absolutely ruin his day.

But will a very public, Facebook-powered penance curb this behavior, or… make this kid even angrier, and potentially more of a bully?

We asked a local bullying expert if posting this on social media was a good idea.

“The father is trying to do something to fix the situation,” says Rusty Sullivan of Boston vs. Bullies. “He’s coming from a good place in terms of motives, but I’m not not sure the method will work.”

According to Sullivan, education and modeling behavior is what works.

“We shouldn’t vilify these kids,” he says. “They’re still kids, and still deserve our attention.”

The best way to combat bullying from your kid isn’t punishment, according to Sullivan. It’s pointing out better options going forward.

Kids need to understand the consequences of their actions.

Just maybe not this much attention.