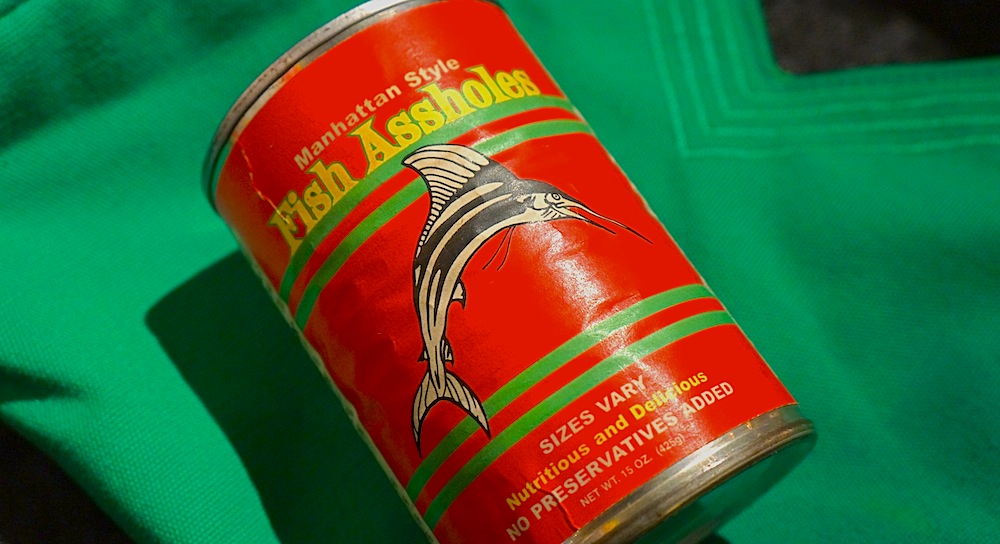 Close your eyes and think the phrase “craft fair”. What immediately comes to mind? Jars of homemade jam stacked in a pyramid with sprigs of holly tucked artfully around them? Loosely crocheted hats? Christmas elevator music? These are the kinds of things that came to mind when I closed my eyes, but to challenge my presuppositions, I went on a quest for the weirdest things available at craft fairs in the Boston area. And guess what? There is some very weird stuff for sale at craft fairs. For example, cats… 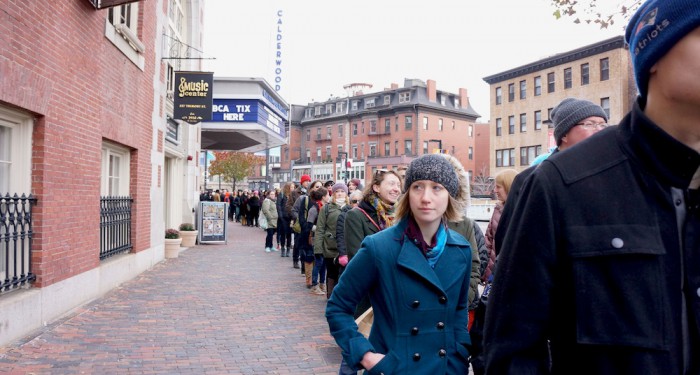 I know this is not a typical craft fair when I arrive and find that the line to get in stretches around the block. “Is it always like this?” I ask someone in front of me. She says it is pretty much— she’s gone every year. I ask what it’s like inside and she says “It’s like Etsy exploded.” When I ask what the weirdest things she’s seen at this fair was in previous years, she and one of her friends start describing something that makes no sense to me. “It’s like a dinosaur, but with a plant growing out of it.” I nod politely, and then ask her if she’s excited that this year’s Bust Craftacular features a “cat cafe”. Now it’s her turn to look at me as if I’m speaking Martian. “A what?” But the couple behind me knows what I’m talking about. When I ask if they’re there for the cats or the crafts, they both say “cats” in perfect (and borderline hysterical) unison. Then she adds, “…but the crafts sound cool too.” A few minutes later I hear him whisper to her, “You brought the catnip, right?”

Inside, at Boston’s large, echoey Cyclorama, the booths are bursting with colorful handicrafts. Despite the tempting homemade marshmallows, the carefully curated museum of well made useables of Boston General Store, and the mesmerizing patterns on Pretty Snake’s fashionable offerings, I stick to the beeline I’m making for the back of the building where the cats are being handed out. (Or handed around really…) 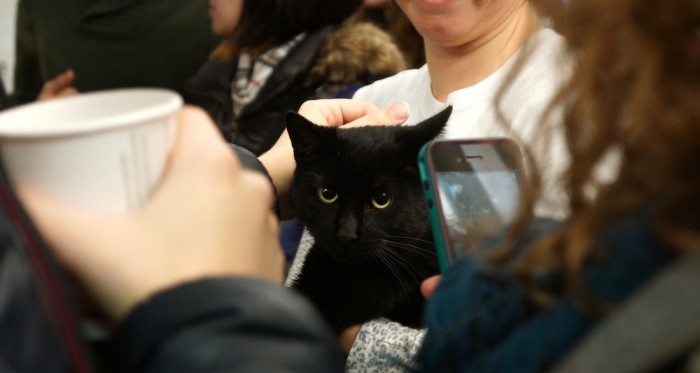 The crowd is doing more cuddling than purchasing—they are petting the cats (all residents of Broken Tail Rescue,) practically flat. Still, the fact that they are on offer for adoption makes them the weirdest thing available here. Runner up goes to the intense small batch vinegar that Fire Cider claims can “cure boredom”. It made my eyes water, but it’s a toss up whether it can cure boredom better than a cat. Still, I can think a few folks that I could give a nice bottle of vinegar to this holiday season.

This annual fundraiser for the Somerville Homeless Coalition is a craft fair of all knitted goods and didn’t feature anything all that strange unless you count mittens so tiny that they could only be for elves. I am a little afraid to ask who the tiny mittens are for or by, but this one gets a mention because it has a pop-up iteration on what is essentially a traffic island in Davis Square. Not the weirdest stuff that you can find at a craft fair, but definitely the weirdest location for one.

I’ll have to stop here and tell a very short story.

A Little Bazaar is a little outside of Boston. I went with friends and we met up with more of their friends enroute for lunch. In an attempt to research the fair, I asked around and discovered that no one else had ever been to it before either. I began asking why people wanted to make the trek out to Lowell—what their fantasies were about the fair, etc., and then found myself explaining that I wasn’t really looking for a gift for anyone but just for weird stuff for an article I was writing. At this admission, a fellow diner turned to me and said “What would be your white whale here? What’s the weird thing that you doubt you’ll find at a craft fair, but are secretly hoping is hiding at one?”

This threw me for a huge loop. I had been thinking that I was just doing a fluffy story about holiday shopping, but realized immediately that I am not. I am looking for something that doesn’t quite exist yet, but which I’m really hoping will someday. The answer to the white whale question involved explaining how a friend and I tried to sell conceptual art at a craft fair once and were met with the holiday shopping equivalent of dead silence. I realize that I am not looking for the weirdest thing at these craft fairs—I am looking for signs that the notion of craft is ready to encompass conceptual art. I am looking for people selling things that have no use value. And for evidence that shoppers are ready to think about holiday gift giving as an opportunity to push against the boundaries of normalcy.

And here’s the kicker: I found my white whale at A Little Bazaar. 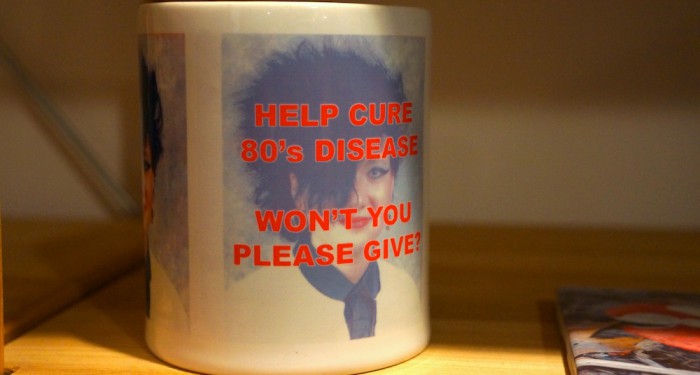 A Little Bazaar is hosted by Mill No. 5, a beautiful old industrial space in Lowell, and features an eclectic variety of vendors. Big city hipsters mingle with locals while a DJ spins vintage records on a vintage turntable. The smell of popcorn from the Luna Theater fills the air.

I am thrilled to see Stompbox Sonics vending their laidback collection of handcrafted effects pedals (as well as an extremely handsome red Hagstrom 2DF semi-hollowbody guitar which you should snap up if it isn’t already gone.) I also find some definitively weird things for sale among the products on offer by Tom “ModularMan” Lehman (for example a ceramic coinbank printed with a lovely 1980’s style yearbook photo claiming to raise funds to cure “’80s disease”); by Jessica Lynn (homemade nailpolish anyone?); and by Eeldrytch Leather Workshops— they sell a pretty wide variety of armor cases and quivers if you’re in need.

I am charmed by Jennifer Carland’s abstract local maps and even finally figure out what those girls in line at the Bust Craftacular were talking about. But the winner of the A Little Bazaar Craft Fair, and in fact of all of the craft fairs I attended, was a booth manned couple named “Kris and Heather” with a table full of vintage “stuff” (mostly records, toys and bracelets.) They have no web presence or even a name for what they’re doing. Just thick Lowell accents and one solitary piece of conceptual art for sale—a can of “Manhattan Style Fish Assholes”— which I snatch up for a borrowed dollar. They can’t tell me anything about its provenance except that it graced a shelf in Kris’ kitchen for many years and was originally found at a garage sale in Dracut, MA. 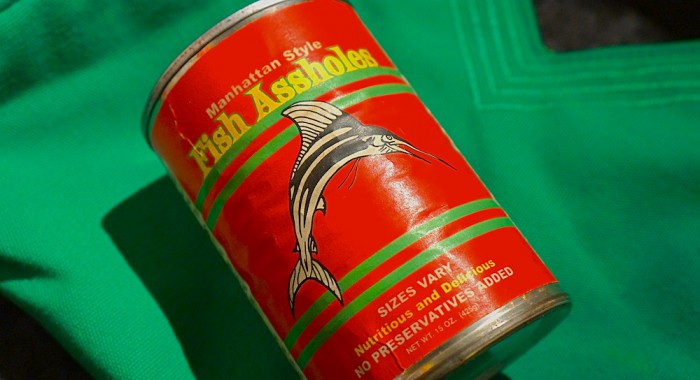 Despite having found my white whale, I continue visiting craft fairs in the hopes that I am on a roll. I poke my head into the annual sale at the Harvard University Ceramics program and am not disappointed. Every year I come in to see what one particular artist, Alice Abrams has had on her mind, and this year it’s donuts—perhaps inspired by the ceramic studio’s recent move to its beautiful new digs slightly closer to Dunkin Donuts. I think this qualifies as both weird and conceptual art (because of how it plays on the notion of a donut being “glazed”…) 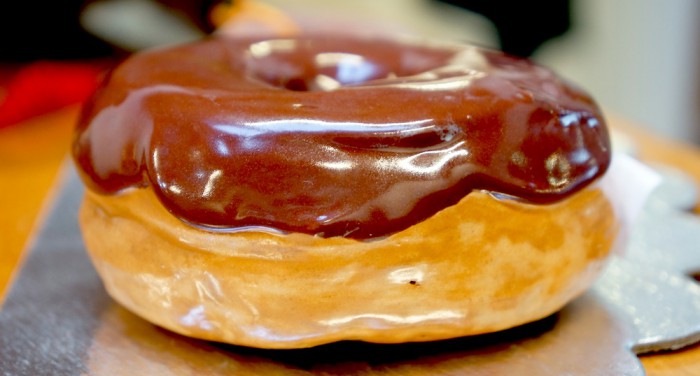 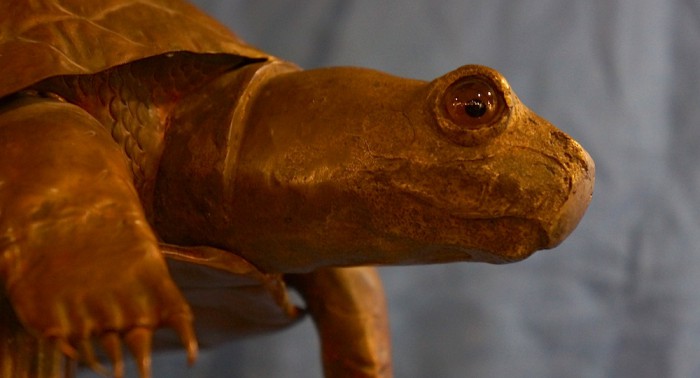 I don’t find much conceptual art at The Harvard Square Holiday Fair, the part of the neighborhood’s overarching Winter event “Sparklefest” that blasts rhythmic ethnic music out onto Church street every weekend in December. But I do find a few weird things: A whole bin of lovingly handmade wooden cooking utensils for lefties (not sure if this means the Cambridge kind or those who are not right handed…); a very realistic, bigger than lifesize copper turtle; some very quirky black and white mugs with scary cartoonish characters on them. And a clock made out of an old urinal (actually, clocks made out of everything…) 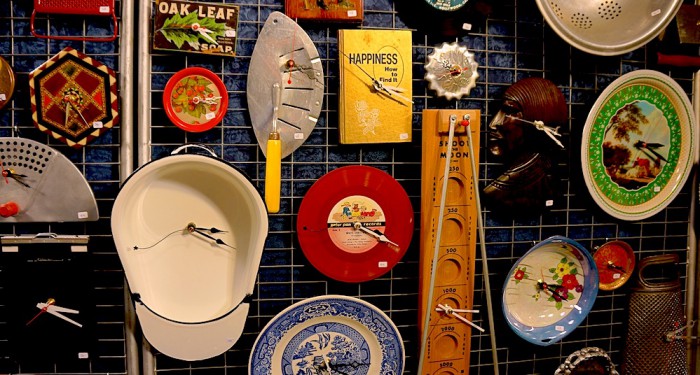 There are also some extremely odd little felted devils among the more typical goods of a veteran of the fair, welder Lennie Kaumzka. These tiny felt monsters peering out from behind the custom grillwork on his tincan lanterns are made by a friend (Lisa Duncan) too shy to make an appearance at the fair in person, but definitely making some viable weirdness. 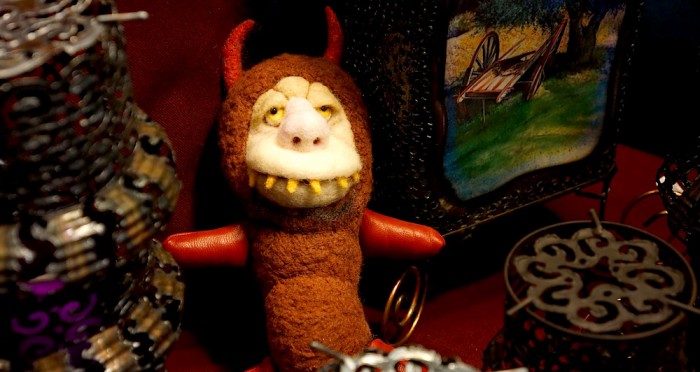 No Boston area search for craft fair weirdness would be complete without a stop at Boston Hassles’ Black Market. Again, not a ton of conceptual art here, but it is definitely the only place in town selling limited edition Black Pus records; Satanic temple paraphernalia; and pornographic drawings. Also the best place to get Tarot readings (on the spot or in gift certificate form); to pick up a copy of “Privacy Policy: The Anthology of Surveillance Poetics”; or to get someone a handmade felt patch that says “Hey Fuck You” in way that is reminiscent of the Pabst Blue Ribbon logo. 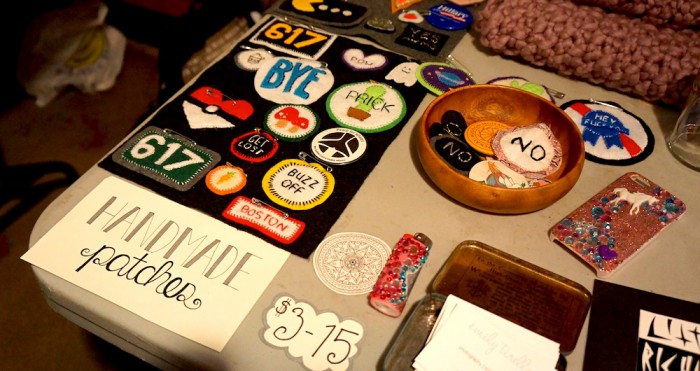 Black Market is also the only craft fair I know of with a large collection of zines available for sale and the only one I that I know of with a bar. It’s also the only place where a vendor (an artist named Ryan Barbosa, doing some pretty amazing paintings on skateboards) offers to sell me a penis pump. Still with packaging, but definitely second hand.

Most of these markets only last for a short time, though the Harvard Square Holiday Fair goes right up until the weekend before Christmas. Consider this collection a good reference guide for next year’s shopping or for connecting with local people virtually for a scrambled last minute cash-for-totally-weird-gifts exchange. Here’s hoping you find everything original you need in time for the holidays and that the ratio of conceptual art at local craft fairs doubles in 2015!

Enter to win a pair of tickets to attend The Hess Collection Seminar and Dinner as part of Boston Wine Festival 2018 at the Boston Harbor Hotel on Wednesday, March 14th. END_OF_DOCUMENT_TOKEN_TO_BE_REPLACED

Carl Isaacs, General Manager of Renewal by Andersen of Boston joined me in studio this morning to talk about a special offer: save 20% on windows and patio doors and your installation is included. Listen in for the details! END_OF_DOCUMENT_TOKEN_TO_BE_REPLACED

Boston band Funeral Advantage is Tyler Kershaw. And Tyler Kershaw had a fun childhood, so it seems. END_OF_DOCUMENT_TOKEN_TO_BE_REPLACED

Perry put me on to daephne and the album blew my mind. END_OF_DOCUMENT_TOKEN_TO_BE_REPLACED