Oh the ’90s…those long nights filled with countless episodes of “Clarissa Explains It All” or re-watching “Space Jam,” while wearing any combo of red, blue and white Tommy Hilfiger garb, and jamming to TLC or Nirvana, whatever your ‘scene’ was back in the day. Yes, in many ways, it was a terrible time for fashion, but for everything lame like fanny packs or 98 Degrees songs, there was something awesome about the ’90s, like Surge soda.

And now, 12 years after the citrus beverage was discontinued, Coca-Cola is re-introducing Surge for exclusive purchase on Amazon.

Surge, launched in 1996 as an answer to PepsiCo-owned Mountain Dew, was the company’s most aggressive launch of a soda brand in that decade (Coca-Cola even came out with an exclusive music mix called “Surge Songs,” see below). Sure, initial reception to the beverage was strong, but its appeal had all but faded by the early 2000s. That was until the “Surge Movement” was formed in 2011. The Surge Movement – 128,000 Facebook likes strong – has fanatically championed the return of Surge since the movement’s inception and ultimately played into Coca-Cola’s decision to bring the beverage back.

The first batch of Surge sold out after about an hour, though supplies have been refreshed since. Surge is sold in 12-packs of 16 fl oz cans for $14. 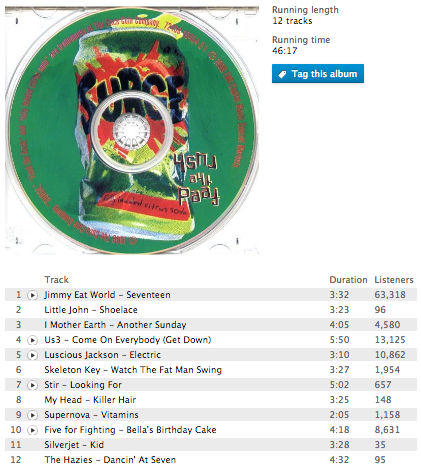 Watching the new Star Wars trailer a million times gave us all sorts of feels. And one of those feels was nostalgia. END_OF_DOCUMENT_TOKEN_TO_BE_REPLACED

Kevin Slane was in 6th grade in the year 2000. I was starting my radio career in the year 2000, peddling the sounds of Limp Bizkit and the like. So we decided to try and stump one another with some alt-rock sounds from that year. Listen in and feel free to play along. END_OF_DOCUMENT_TOKEN_TO_BE_REPLACED

END_OF_DOCUMENT_TOKEN_TO_BE_REPLACED

What started as a conversation with Boston.com’s Chris Rattey about his secret desire to be the sixth member of New Kids On The Block turned into a trip down memory lane. Chris’ vivid memories of the music and pop culture of the 1980s offer an entertaining perspective on what it was like to come of age during that decade and, now, to look back and realize that you were more “New Kids” than “Hair Metal.” END_OF_DOCUMENT_TOKEN_TO_BE_REPLACED

Every city has its characters. People who, by their personality and actions, stand out among the crowds. While some of these characters are known for always being in the same spots, such as Spare Change Guy or the late Mr. Butch, there are those who are known for their effort to put a smile on the faces of those who happen to pass by. In the recent past, Boston has had Keytar Bear, but back in 1993, there was Chris Costonis — the Coffee Buster. END_OF_DOCUMENT_TOKEN_TO_BE_REPLACED

You read that right – two Brooklynites have erected a micro-museum to the famous 1994 scuffle between Olympian figure skaters Nancy Kerrigan and Tonya Harding in their own apartment. END_OF_DOCUMENT_TOKEN_TO_BE_REPLACED

Last week, Perry Eaton of BDCwire asked me to contribute to this piece on post-9/11 rock music. Today, we continued the conversation, widening the scope to that period in rock that followed the alternative boom of the early-to-mid 90s and preceded the indie rock bloom of the early-to-mid 00s. Then we tied it all in to the present-day, and the recent announcement of the Jay Z-backed streaming music service Tidal. END_OF_DOCUMENT_TOKEN_TO_BE_REPLACED

At the end of Planet Waves, Bob Dylan sings “Time is all I have to give/ you can have it if you choose.” That’s always seemed like an apt description for the relationship between a film and its audience. When you commit to watching a movie, you’re agreeing to forfeit a small fraction of your life. And the filmmakers themselves – they’re bound, as well. Whoever they were when they made a movie, wherever they were in their lives, the film preserves those moments for posterity. END_OF_DOCUMENT_TOKEN_TO_BE_REPLACED

A new trailer for Adam Sandler vehicle Pixels was released last night, teasing scenes of mass destruction from the likes of PacMan and Donkey Kong. It’s up to the summer film’s protagonists Sandler, Josh Gad and Peter Dinklage to save the world so…looks like we’re in trouble. END_OF_DOCUMENT_TOKEN_TO_BE_REPLACED

When representatives for 88-year-old To Kill a Mockingbird author Harper Lee announced the release of long-lost novel Go Set a Watchman last month, literary fans everywhere rejoiced, then revolted. Was the famously reclusive author being manipulated into publishing the work as a cash grab for those involved, or did she genuinely want to see her other manuscript in readers’ hands? END_OF_DOCUMENT_TOKEN_TO_BE_REPLACED