‘Christmas Vacation’ vs. ‘A Christmas Story’: Which One is the Ultimate Christmas Movie? 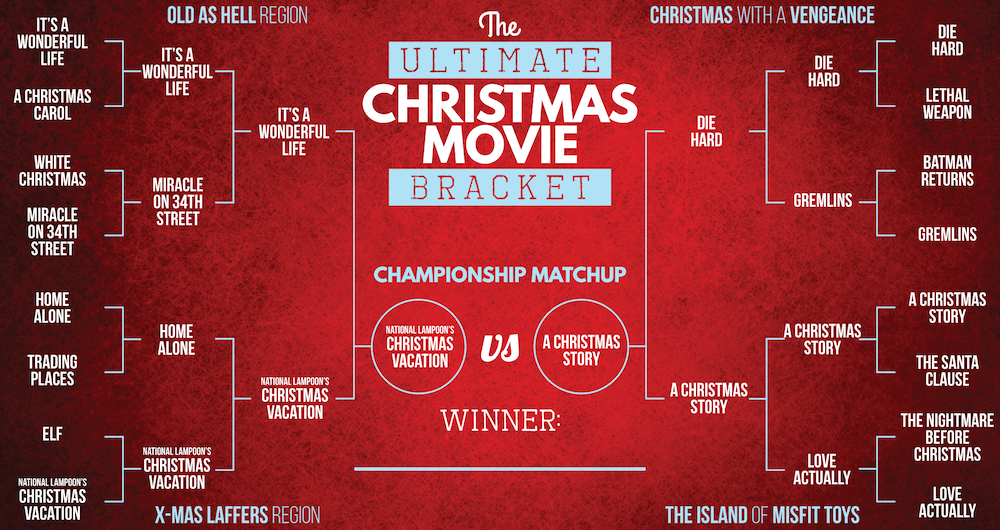 Day 4 of the Ultimate Christmas Movie Bracket, and we’ve reached the finals. “National Lampoon’s Christmas Vacation” faced its toughest matchup yet, one that kept our graphic designer up all night waiting for the final tally, but in the end, it made it through.

In case you missed our initial post Monday, we started with 16 inarguable Christmas movie classics, and somehow narrowed it down to eight, which were trimmed to four, and now our final two. Of the original four regions, we’ve got the #2 seed from the X-Mas Laffers Region matched up against the #1 seed from The Island of Misfit Toys. But before we get into the final vote, a recap of yesterday’s action.

Clark Griswold proved to us in the original “National Lampoon’s Vacation” that a little adversity never got him down. Vandals, a dead dog, cousin Eddie and a skinny-dipping Christie Brinkley would be enough to bring even the hardiest of men to their knees, but Clark, possessed by an acute case of traveler’s dementia, persevered. Just like Clark, “Christmas Vacation” faced seemingly insurmountable odds to make it to the finals — a day one matchup against “Elf,” a day two slugfest with “Home Alone,” and a nail-biter against the king of Christmas movies, “It’s A Wonderful Life.” But in the end, Clark stands triumphant. Until Ralphie shoots his eye out, that is.

Meanwhile, you have to feel for poor Jimmy Stewart. “It’s A Wonderful Life” has been the king of Christmas movies for so long, but this day had to come eventually. Top 4 isn’t too bad, but it’s the beginning of the end for George Bailey. Soon he’ll have gone the way of Thomas Edison’s 1910 adaptation of “A Christmas Carol,” a long-forgotten relic of its era. Sorry, George.

On to our other matchup, and MY GOD IT’S A BLOWOUT!

With 71% of the vote, “A Christmas Story” just dropped Bruce Willis off the top of Nakatomi Plaza. John McClane got to the final four based on his tough guy persona and undeniable grit, but it all fell apart when Ralphie sent in this commercial Bruce Willis did for Seagram’s.

So there you have it, your Ultimate Christmas Movie Bracket Final. Voting will once again only be open until midnight EST, so vote now, because it will all be over faster than a kid getting dressed to go outside during winter.