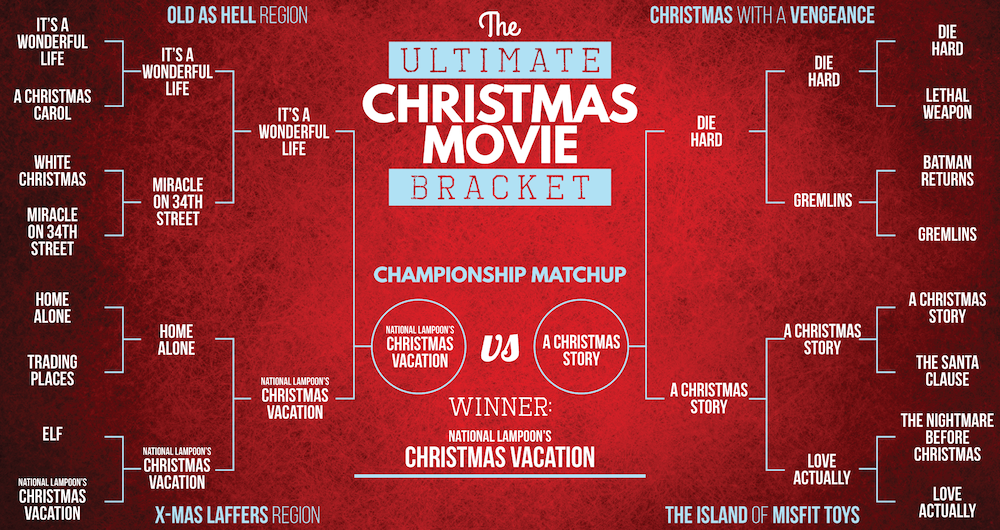 It was never going to be easy. 16 classic Christmas movies in one bracket, facing off against each other for the honorific of being the ultimate Christmas movie. But five days and thousands of votes later, we have a winner.

With 57 percent of the vote, “National Lampoon’s Christmas Vacation” beat “A Christmas Story” in the finals of our Ultimate Christmas Movie Bracket to take home the coveted title. Despite entering the tournament as a two seed and facing the most difficult path to the finals — it beat “Elf” in round one, “Home Alone” in round two, and “It’s A Wonderful Life” in round three — Clark Griswold has emerged triumphant.

Perhaps the last great comedy, maybe even last great film of the ’80s, “Christmas Vacation” arrived at a special holiday season between two eras of comedy. Former SNL funnyman Chevy Chase once again reprised his role as Clark Griswold, a character that, as far as laughs go, was both youngster-tested and Dad-approved. With the ’90s soon bringing its own brand of comedy, and several SNL-related franchises to boast, “Christmas Vacation” was the cringe-worthy laugher that viewers from multiple generations could both sympathize with and get a kick out of. The National Lampoon’s classic has stood the test of time, and quoting it profusely has become just as appropriate as decorating a tree every holiday season. It’s no surprise then, that “Christmas Vacation” has been voted by you as the greatest holiday movie of all time.

To everyone who voted and followed this tourney with us from beginning to end, thank you. We hope this was as fun for you guys as it was for us. As for “A Christmas Story,” better luck next year, sucker.

Golden Globe and Emmy nominee Benjamin Wallfisch is the composer responsible for the score of the hit movie IT. I talked to Ben about his approach to scoring the new version of this iconic story and his thoughts on film and music overall. Some very insightful commentary; listen in. END_OF_DOCUMENT_TOKEN_TO_BE_REPLACED

Rupert Gregson-Williams is an award-winning film composer. He just so happened to compose the score for this summer’s big blockbuster Wonder Woman. We talked about his beginnings in film scoring, film scores that move and inspire him and, of course, Wonder Woman. END_OF_DOCUMENT_TOKEN_TO_BE_REPLACED

Jeff Rapsis is a New England-based composer and performer. Lately, he’s been creating live musical scores for silent film screenings. I talked to him about his process and a few of his upcoming performances at The Capitol Theatre in Arlington and the Somerville Theatre. You can keep track of where else Jeff is scoring silent films here. END_OF_DOCUMENT_TOKEN_TO_BE_REPLACED

Planning on seeing Rogue One: A Star Wars Story when it opens this weekend? I joined Adam 12 to give you an idea of what to expect. But don’t worry, I didn’t give anything away. END_OF_DOCUMENT_TOKEN_TO_BE_REPLACED

No, not from afar, from the comfort of her couch. From the actual awards themselves. That’s where Meredith Goldstein was for the Oscars. She shared all the juicy, first-hand details with me. END_OF_DOCUMENT_TOKEN_TO_BE_REPLACED

To celebrate the opening of ‘The Force Awakens,’ I had some very special guests in studio to start the Thursday, December 17 edition of The Brink. Listen. END_OF_DOCUMENT_TOKEN_TO_BE_REPLACED

Watching the new Star Wars trailer a million times gave us all sorts of feels. And one of those feels was nostalgia. END_OF_DOCUMENT_TOKEN_TO_BE_REPLACED

END_OF_DOCUMENT_TOKEN_TO_BE_REPLACED

If you’ve finally finished crying over Inside Out — or Lava, the short that ran before it — Pixar is readying another assault on your tear ducts with The Good Dinosaur, if its newly released trailer is any indication. END_OF_DOCUMENT_TOKEN_TO_BE_REPLACED