Chief of Arts and Culture Julie Burros Talks State Rocks Songs, Not Being a ‘Czar,’ and Plans for Boston 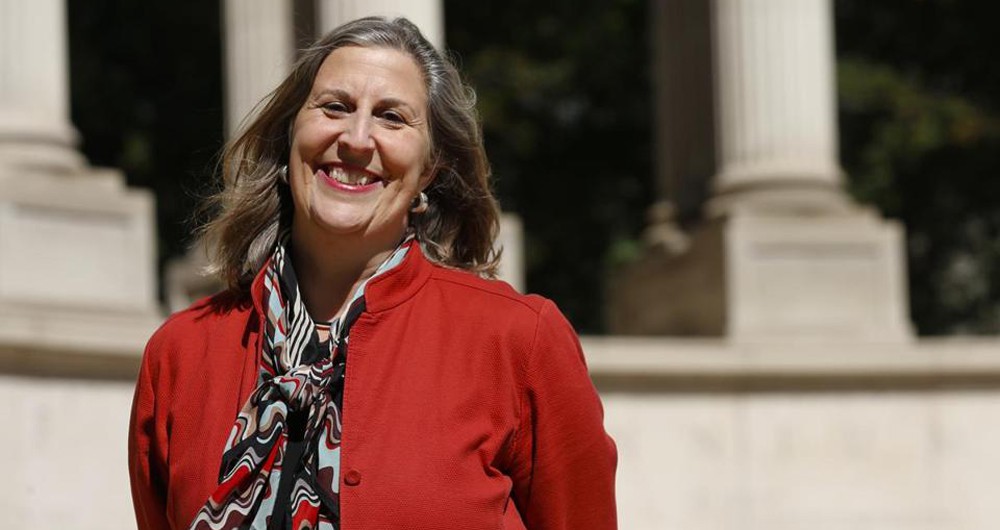 Much has been made about Boston’s new “Arts Czar”, Julie Burros. She comes to Boston by way of the Windy City, where she was the city’s Director of Cultural Planning for 15 years.

In an effort to both boost Boston’s arts and culture profile and fulfill a campaign promise, Mayor Walsh appointed Burros to be Boston’s first Chief of Arts And Culture in over twenty years. What does a chief of Arts and Culture do?

“I oversee the Mayor’s Office of Arts and Culture, which is charged with carrying out the Mayor’s vision for Boston to be a municipal arts leader,” says Burros. “The department has a diverse portfolio including the Strand Theatre, the Boston Cultural Council, the Boston Art Commission, the Mayor’s Mural Crew, and several programs like the exhibits in City Hall, the annual Open Studios, and the AHTS Festival. We will also head up the creation of a cultural plan for Boston. In addition to being a department head, as a ‘Chief’ I am in the Mayor’s cabinet, and report directly to Mayor Walsh.”

So far Burros is enjoying her time in Boston. But there is one thing that she would like to clear up: she is not an Art Czar. She says, “In my opinion ‘czar’ doesn’t have the most positive connotation, and couldn’t be more different from my personality. I know nobody means it literally, and I hope that as people get to know me better they will feel comfortable calling me Julie.”

I recently caught up with Burros via email to get her take on the arts, her new job and her first impressions of Boston.

When people hear about your new position, they have their own preconceived notions. What is the biggest misconception about your job and office?

I think that there are a lot of expectations from people that I can fund a project or an idea they have. The Boston Cultural Council does give out grants, and Mayor Walsh has doubled the program’s funding, however, if you haven’t applied there isn’t a lot I can do to invest in a project. We have limited mechanisms for support currently, but I aim to grow them.

Mayor Walsh’s first order of business for me is to create a cultural plan for Boston. It’s a vision for the city that explores how we can reach our full potential and address some of our most intractable issues through arts and culture. We will have a very participatory process full of opportunities to engage in many different ways, both in person and virtually. It will also help to articulate the role of government, philanthropy and the private sector in accomplishing what is identified in the plan.

Other than the cultural plan, what aspects of Chicago’s Arts and Culture scene are you looking forward to bringing here to Boston?

I’d like to see Boston embrace temporary public art more fully, and allow our artists to take some risks creatively with public art. During his speech to the Chamber of Commerce in December, Mayor Walsh told the real estate development and architecture community to be more creative with their designs, and there are some great lessons from Chicago in that regard. One thing Boston could really use are more high profile architecture critics in the media to elevate the discourse about the impact of design on every day life.

Since coming to Boston, have you identified any major problems that need to be fixed?

Even in my short time on the job it’s evident that the need for space at affordable prices is a huge issue for artists and the cultural community.

People’s opinions of both Art and Government have to do with their personal interactions with them. How will Bostonians be able to interact with your office?

I have made myself very available and am meeting with people, going to events, seeing cultural productions, handing out my card all over the place. I will arrive somewhere and almost instantly someone tweets that they spotted me at the event. When we launch the cultural plan later this winter, people will have many, many opportunities to engage in the process, in many different formats, some larger forums, some smaller meetings, and I and my team will be all over the City. 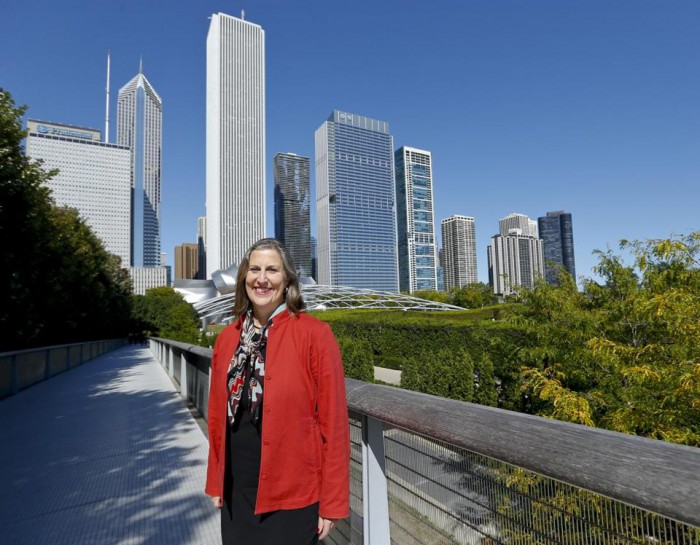 Coming from Chicago, what has been the biggest cultural shock of adapting to life in Boston?

Finding my way around Boston’s complex geography is challenging. Chicago has a grid, which makes navigation very easy and predictable, you always know where you are in the larger scheme of things. I am starting to learn my way around and am exploring the city but I am still at the mercy of Google Maps a lot of the time. It does keep me on my toes, I will say that.

Are Boston and Chicago similar in any surprising ways?

I didn’t think it would be quite so cold here, so that is surprising. I innocently thought I was leaving the polar vortex behind me. I hope you don’t have thunder-snow here. Kidding aside, the two cities share a remarkable number of similarities and they aren’t really all that surprising. They share a strong civic pride and people have a real sense of loyalty for their neighborhoods. Both cities boast an incredible number of world class cultural institutions. Both cities have awesome Mayors, and now both cities will have the Olympic bid process in common as well.

In May, Boston Calling will take place right outside of your office in City Hall Plaza. What do you think of this year’s line-up?

It is an incredible line up. I am looking forward to seeing Beck. I have a lot of his records but have never seen him perform live.

A lot of debate has occurred on the subject of a state rock song here in MA. The legislature did not vote on a bill introduced to make the official song, “Roadrunner”, by The Modern Lovers. Some legislators on the South Shore felt it should be something from Aerosmith, particularly, “Dream On”. What do you think of these picks?

I really like the idea of “Roadrunner” as the official song. I wonder what the opposition was to that. He sings “I’m in love with Massachusetts.” It’s so sweet and genuine. Taste in music can be so subjective, maybe they felt like you can’t win no matter what song you choose. 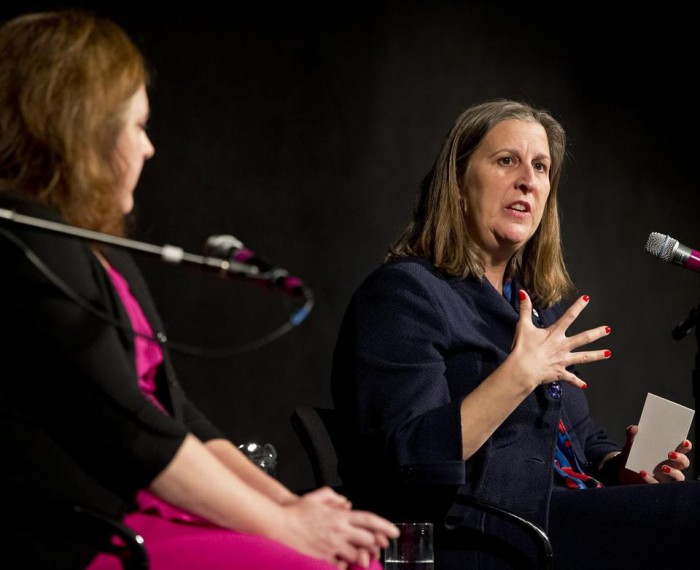 It’s now award season across the country. Were there any movies, albums or exhibits that caught your eye in 2014?

I saw a stage production of Into the Woods earlier last year so I was very eager to see the film version, which I went to on Christmas Day. I really enjoyed that. I know it’s been nominated for some awards. Unfortunately, we don’t have anything like the Turner Prize here in the US, I think that awards for motion pictures have this oddly outsize profile in the US. It would be great to have a very high profile awards for other genres like dance and visual art.

Do you have anything you’re looking forward to seeing in 2015?

I am eagerly awaiting Patti Smith’s follow up to Just Kids, I don’t know if it’s coming out in 2015, but I heard she was writing one. It is such a fascinating story of artists finding their creative voices. And I have tickets to see John Cameron Mitchell in Hedwig in February, very much looking forward to that.

Finally, Chicago is known for it’s pizza, specifically it’s Deep Dish pizza. Have you found any noteworthy pizza in your new home, Boston?

You know what, I haven’t had pizza a single time yet here in Boston. And I love pizza. I need to get cracking. Any recommendations would be very welcome.

To recommend how to improve Boston’s art scene, or to tell Julie where to get the best pie in Boston, follow Burros on Twitter or reach out to her office.

Enter to win a pair of tickets to attend The Hess Collection Seminar and Dinner as part of Boston Wine Festival 2018 at the Boston Harbor Hotel on Wednesday, March 14th. END_OF_DOCUMENT_TOKEN_TO_BE_REPLACED

Artists for Humanity Co-founder Jason Talbot and Major Gifts Director Emily Smaldon were in studio this morning with Mallory Bazinet, Event Manager for GrandTen Distilling. Jason and Mallory talked about The Contemporaries, their upcoming event to launch a new patron group for young professionals. Click here to join them on Thursday, August 17! END_OF_DOCUMENT_TOKEN_TO_BE_REPLACED

Aida Villarreal-Licona is the Events Coordinator for SoWa Boston’s Art & Design District. She was in today to talk about their holiday shopping event this Thursday December 15 from 4-8 p.m. at 450 Harrison Avenue. A great opportunity to help local artists and get some holiday shopping done! END_OF_DOCUMENT_TOKEN_TO_BE_REPLACED

Natalie Lemle was in to talk about ArtLifting, a program that aids homeless and disabled artists. Currently, 72 artists in 11 states are receiving 55% of all profits from your purchase of their artwork and photography. Click “more” to hear my chat with Natalie and to see work from one of the artists. END_OF_DOCUMENT_TOKEN_TO_BE_REPLACED

Boston band Funeral Advantage is Tyler Kershaw. And Tyler Kershaw had a fun childhood, so it seems. END_OF_DOCUMENT_TOKEN_TO_BE_REPLACED

Perry put me on to daephne and the album blew my mind. END_OF_DOCUMENT_TOKEN_TO_BE_REPLACED

It’s no secret that Bostonians like to show their Patriot pride with tattoos. Who can forget the awesome guy who got that sweet Bill Belichick arm tattoo? Or the less-awesome guy who showed off his full-head Tom Brady helmet tattoo in his mugshot? END_OF_DOCUMENT_TOKEN_TO_BE_REPLACED

While many have called out Davis since a video of her refusing to issue a marriage license to Rowan County residents David Moore and David Ermold went viral in July, relationship columnist and gay activist Dan Savage went a step further on MSNBC Tuesday night, saying that “this is about someone hypocritcally looking to cash in”. He added: “And she is a hypocrite.” END_OF_DOCUMENT_TOKEN_TO_BE_REPLACED