Catching Up with the Restlessly Creative Andrew Bird

Preternaturally talented songwriter, multi-instrumentalist and Chicago native Andrew Bird has never been one to stick to the script. His live shows are a dynamic mix of violin and whistling loops, roots-y folk tunes and upbeat baroque pop, and his recorded output spans from immaculately produced studio albums to instrumental companion EPs, a myriad of live collections and even a film scoring project (2012’s “Norman”). Both on stage and in studio, Bird’s approach to his work is unlike many others.

“I would, like every other band, put out a record every 2 to 4 years, play those 12 songs, as they are on the record more or less, but I would go nuts,” he explains. “That doesn’t work with the creative flow and impulses.”

It’s been 2 years since the release of Bird’s last full-length studio effort, “Break It Yourself,” and his latest project, a covers LP focused squarely on the gothic country stylings of husband-and-wife duo The Handsome Family, is an illustration of his point.

“Each one does what I think some of the best songs do, which is distill a novel’s worth of material and emotion into just a few words,” Bird says of the 10 tunes he ultimately chose for the collection. The charmingly-titled “Things Are Really Great Here, Sort Of…” surveys The Handsome Family’s 20-year career through Bird’s unique lens. “It’s not quite covers,” he explains. “I oftentimes take the songs and almost rewrite [them] in a lot of cases, and I just connect with the material so much, I feel like they’re my songs.”


For Bird, this “top 10” (which includes the now-iconic “True Detective” theme song “Far From Any Road”) represents a touchstone of song craft. “A lot of people have their favorite novelist, their favorite poet, their favorite director – someone they check in with every once in a while to remind themselves what’s good,” he says. “As far as songwriting goes, The Handsome Family does that for me.”
Bird is bringing those songs on the road this month, along with his own material and a new band that includes singer/songwriter Tift Merritt, pedal steel guitarist Eric Heywood and Bowl of Fire drummer Kevin O’Donnell. He describes the configuration as “leaning a little more towards a country feel,” and embracing his early influences in country, gospel and the blues. Opening the New England shows, including Saturday night’s date at the Lowell Summer Music Series, will be a thematically consistent character in Jimbo Mathus, founder of the swing-revival band Squirrel Nut Zippers.


Despite the more old-time nature of the lineup, Bird still promises plenty of the inspired variety that fans have come to expect from his performances. “It goes from being more rock than I thought it would be to doing the one-microphone Bill Monroe thing,” he says of this latest round of shows.


That sense of variety, from spending time with the band gathered around a single microphone in the style of the “Father of Bluegrass” to opening each show with one of his trademark voice and violin looping sessions, is Bird’s recipe for a successful show. “Whenever I start to get off-track or not connected, that guarantees that I’ll connect to the musicians, to my instrument,” he says of the Monroe approach. “You sing better, you play better – there’s no wires and monitors getting between you and the audience.” As for starting each set alone, “it’s like doing an echolocation of the room,” Bird says. “I can feel all the corners of the room and feel my instrument, and then I’m ready to do the show.” 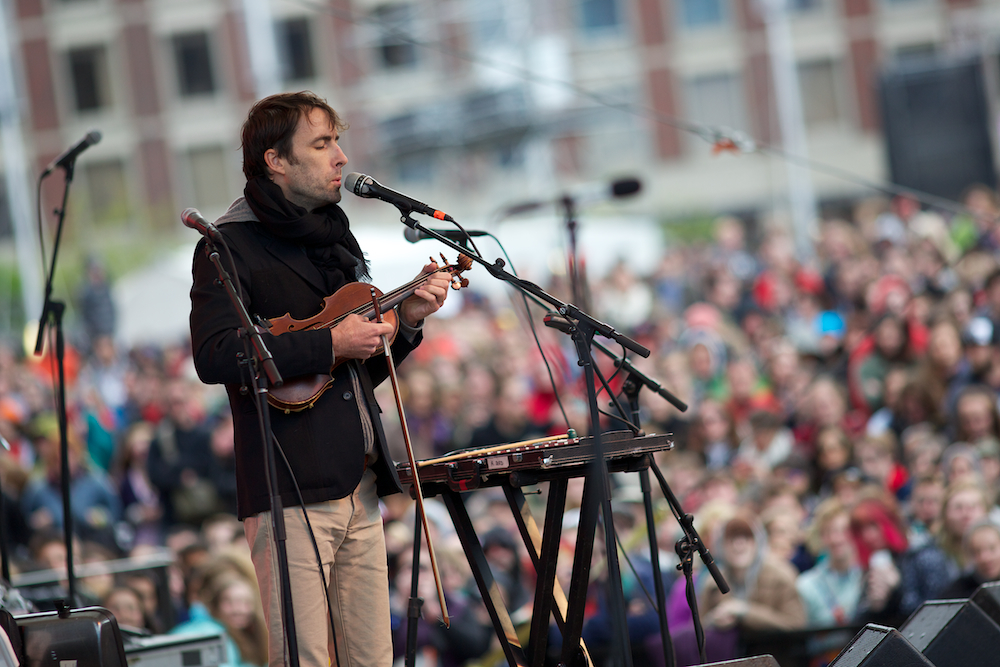 His live sets also tend toward developing and road testing new material, he explains, to keep both himself and his audience engaged. “That’s kind of become my thing I guess, to show the process on stage,” Bird says. “[It’s] kind of with the shrug of the shoulders like, ‘I dunno folks, it could go this way, it could go that way.’”


If there’s an ultimate takeaway from a conversation with Andrew Bird, it’s that he values the impulsive and the unpredictable, and that’s part of what makes his work special. The sets change, the songs evolve, and for Bird, “it’s just searching…for the moment of inception. I think when you do that it keeps you awake in front of your audience, it keeps you more real and alive.”