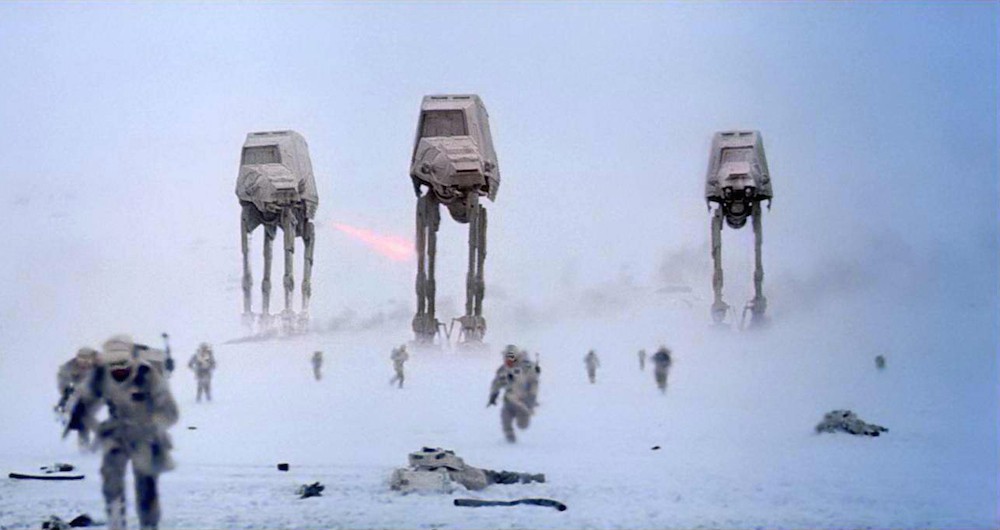 Midway through this February’s unprecedented winter onslaught, a curious thing popped up on Facebook’s news feed. James “Jimbo” Encalada, a longtime resident of Somerville, made an announcement. It seemed he was planning a big move from his small little hovel outside of Boston to somewhere a bit more exotic. 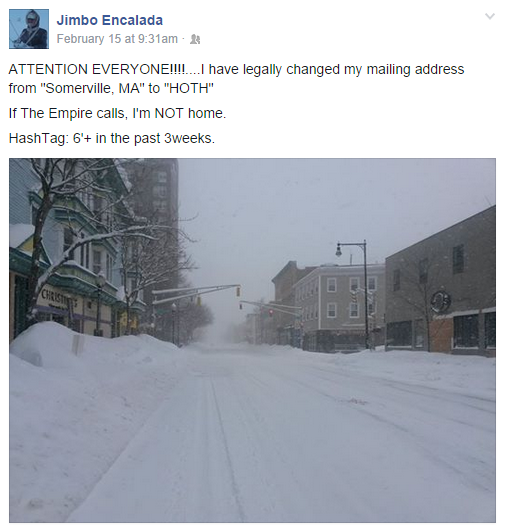 Hoth? The Empire? What is this, Star Wars? According to Encalada, the answer is a resolute “yes!”

“I grew up watching The Empire Strikes Back,” he tells BDCwire. “So whenever I think of cold and snow, I think of Hoth. Or, to be precise, the sixth planet in the Hoth System.”

As a joke, Encalada – famous among his friends for “checking in” on Facebook just about everywhere he goes – decided to change his apartment’s online designation. Whenever he or anyone else felt the need to mark their arrival, they’d now have to tag it as “Hoth.”

The joke was a big hit, so Encalada redecorated his Facebook profile with screen shots and artwork from the film. He also began providing consistent updates on his day-to-day travels, which conveniently mirrored the first act of Empire Strikes Back. Soon enough, Encalada’s dog Midnight and others were making regular appearances in his posts. 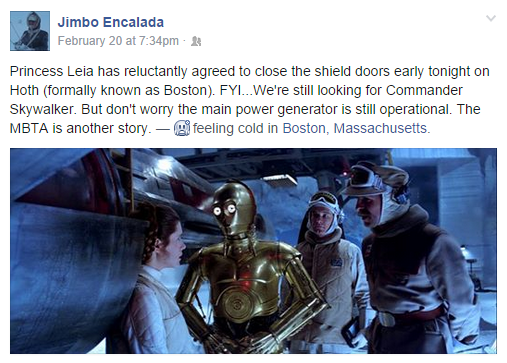 So were other local celebrities, like the MBTA – everybody’s favorite public transit system. A Medford native, Encalada put this new outlet to good use and took out his frustrations with each successive post. Trains and buses, inexperienced transplants constantly bugging him about the weather, the street’s many new potholes – all were susceptible to Encalada’s game.

He even took on space savers, the tried-and-true tradition of Boston winters currently under fire in Somerville and elsewhere. Before Mayor Walsh’s recent statement, Encalada was one of many drivers who regularly made use of space savers. So when the snow emergency was still in effect, he made use of an old chair – besides, Commander Luke Skywalker’s life depended on it.

Winter looks like it’s on the retreat, but Encalada isn’t ready to “move back” to Somerville just yet. When asked how long he intends to keep his current Facebook address at Hoth, Encalada stands his ground: “Until the weather gets better and the MBTA runs on a 100% normal schedule.”

Before that moment comes, Encalada plans on going about his days in a world where Han shot first and temperatures in the high 30s are a cause for celebration.

Enter to win a pair of tickets to attend The Hess Collection Seminar and Dinner as part of Boston Wine Festival 2018 at the Boston Harbor Hotel on Wednesday, March 14th. END_OF_DOCUMENT_TOKEN_TO_BE_REPLACED

Golden Globe and Emmy nominee Benjamin Wallfisch is the composer responsible for the score of the hit movie IT. I talked to Ben about his approach to scoring the new version of this iconic story and his thoughts on film and music overall. Some very insightful commentary; listen in. END_OF_DOCUMENT_TOKEN_TO_BE_REPLACED

Rupert Gregson-Williams is an award-winning film composer. He just so happened to compose the score for this summer’s big blockbuster Wonder Woman. We talked about his beginnings in film scoring, film scores that move and inspire him and, of course, Wonder Woman. END_OF_DOCUMENT_TOKEN_TO_BE_REPLACED

Jeff Rapsis is a New England-based composer and performer. Lately, he’s been creating live musical scores for silent film screenings. I talked to him about his process and a few of his upcoming performances at The Capitol Theatre in Arlington and the Somerville Theatre. You can keep track of where else Jeff is scoring silent films here. END_OF_DOCUMENT_TOKEN_TO_BE_REPLACED

This should never have happened. END_OF_DOCUMENT_TOKEN_TO_BE_REPLACED

I spend far too much time on Twitter. Here’s a handful of posts from last year that I found to be entertaining on one level or another. Enjoy. END_OF_DOCUMENT_TOKEN_TO_BE_REPLACED

Planning on seeing Rogue One: A Star Wars Story when it opens this weekend? I joined Adam 12 to give you an idea of what to expect. But don’t worry, I didn’t give anything away. END_OF_DOCUMENT_TOKEN_TO_BE_REPLACED