The Pitch: An Introduction to Boston’s Rich Busking Tradition 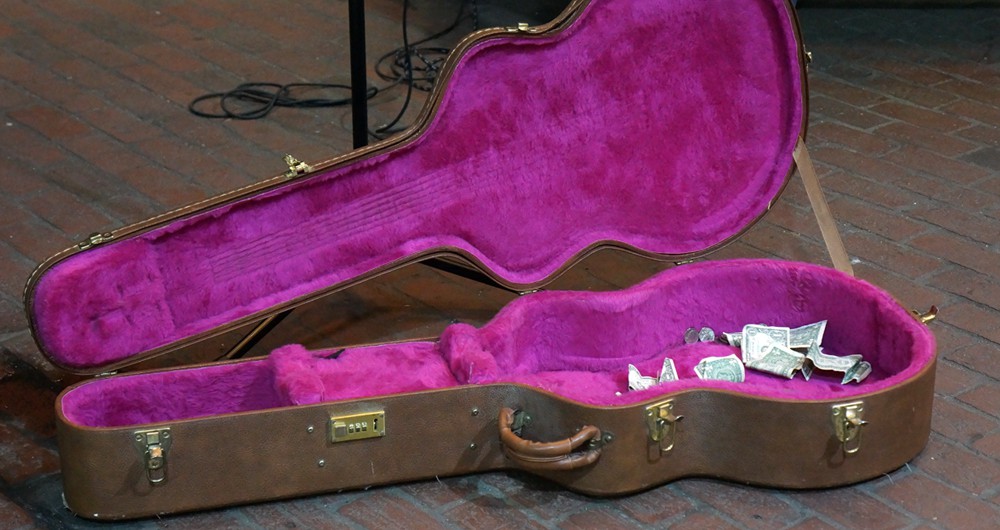 Spring is really truly here now. The proof is in the crocuses that have started to emerge in every yard and traffic island.

With an equivalent ability to add hints of brightness and color to our formerly frigid days, Boston’s hardy buskers are also starting to emerge into our street corners and squares after a tough winter underground in the subway. Or worse—slogging away at off-season jobs.

And they aren’t here by accident.

According to Stephen H. Baird, a Boston-based arts advocate and probably the foremost expert on busking in the US, musicians come to Boston to play outside here very much on purpose. Especially women.

“What’s unique about Boston,” explains Baird, whose activism led to much of the city’s legislation and permitting around street performance, “is it’s a college town. So there is a constant influx of new people—young people—who take to the streets to express themselves.”

But it’s also that it’s legal here, a fact that he claims has caused Boston’s female busker population to increase (proportionally to the male street performer population) at a faster rate than anywhere else in the world. There’s also a long history of (women) artists who got their start busking on the streets of Boston.

“Tracy Chapman played in Harvard Square. People say Joan Baez did it—though I’m not sure that’s the case—but I know Meg Hutchinson did. Mary Lou Lord. And she would bring all kinds of stars—like Shawn Colvin—down to the subway with her. There are all these stories about that. So there are a number of people who come to play here just because of them. Because of the history of women street performers here that ‘made it’.”

But Baird mentions male artists who have made it here too and are spreading the word. “Martin Sexton, who travels all over the world and played in the subways and streets of Cambridge, tells people ‘if you really want to know how to become a good performer and singer, play in the streets.’ So they come because of him.”

This sentiment is echoed and taken a bit further by musician, writer, TED-talker and former Boston busker Amanda Palmer while describing how her ‘living statue’ days in Harvard Square shaped her in a new memoir The Art of Asking:

“I’ve played in every venue imaginable over the last fifteen years, in fancy old theaters and shitty sports bars, in secret underground piano bars with capacities of forty people, to crowds of thousands in sports arenas… What is possible on the sidewalk is unique.”

The uniqueness that Palmer is referring to has something to do with a type of exchange between artist and audience that happens more easily within the democratic (and ironically more intimate) public sphere than within the private sphere of a more formal venue. The exchange certainly involves dollars for performance as it does in a club, but it’s something more than that as well.

Cameron Brown, who has created a website celebrating Boston’s buskers, hints at it when explaining his drive to collect the backstories of the city’s street musicians. “People don’t pay that much attention. They see buskers as almost just panhandling…But most buskers are really talented artists.”

For example, he’s learned that one Park Street regular has been working on a project with a 2-time Grammy nominee. “They are sharing their art here to make some money, but also it feeds their art. People tell me they write a lot of music on the subway platforms.” Buskers are giving their audience an opportunity to be there when a song is born—to be a part of bringing it into being.

And feeding our larger creative community at the same time.

Baird’s research shows, he says, that when people support grassroots art on the street, it trickles up. As an example, he rattles off a list of names of several street performers who have taken over nights at Toad and The Lizard Lounge in Cambridge, and the Burren in JP. “They were street performers, subway performers and they’ve taken that all inside. So there’s a progression of taking your street performance, and your talent, and your crowd and bringing it into the club scene. It’s really integrated.”

Over the course of this week, a bouquet of local street talent will be offered up in this space. The “pitch” (what buskers call the performance spots where they set up) will only introduce a small handful of locals, plus an old-school Boston busker who will be touring through town at the end the week. Consider it an invitation to seek out artists on your own that you like, and then really tune in this year to their unique sound or performance style. By doing so, you’re helping to maintain Boston’s rich musical legacy. Support a choice handful of street musicians regularly with your dollars and your attention and watch them and our music scene flourish together.

Read More From This Series:

For Buskers, Sometimes Blending in Is Best

Getting the Perspective of Keytar Bear

Enter to win a pair of tickets to attend The Hess Collection Seminar and Dinner as part of Boston Wine Festival 2018 at the Boston Harbor Hotel on Wednesday, March 14th. END_OF_DOCUMENT_TOKEN_TO_BE_REPLACED

Abe Rybeck, founder and Executive Artistic Director of The Theater Offensive was in studio this morning to talk about ClimACTS! Bounce, which celebrates art loud and proud at Royale on Wednesday, May 3. END_OF_DOCUMENT_TOKEN_TO_BE_REPLACED

Melanie Gillespie is an author and the founder of Mel O’Drama School of Acting in Milton. She was in studio this morning to talk about her latest book Darlene and the Drama Queen and how acting can help kids to develop confidence. END_OF_DOCUMENT_TOKEN_TO_BE_REPLACED

We’re not suggesting coconuts migrate, but we are suggesting that you see Spamalot at North Shore Music Theatre, two weeks only, September 27 through October 9. Click here to grab your tickets, and click “more” to hear my interview with Brad Bradley, who plays Patsy. END_OF_DOCUMENT_TOKEN_TO_BE_REPLACED

You know Dracut, MA native Scott Grimes from television’s American Dad and ER. You know Bob Guiney from The Bachelor and The Bachelorette. But did you know the two are teaming up to raise funds for the Dracut Performing Arts Program? END_OF_DOCUMENT_TOKEN_TO_BE_REPLACED

Boston band Funeral Advantage is Tyler Kershaw. And Tyler Kershaw had a fun childhood, so it seems. END_OF_DOCUMENT_TOKEN_TO_BE_REPLACED

Perry put me on to daephne and the album blew my mind. END_OF_DOCUMENT_TOKEN_TO_BE_REPLACED