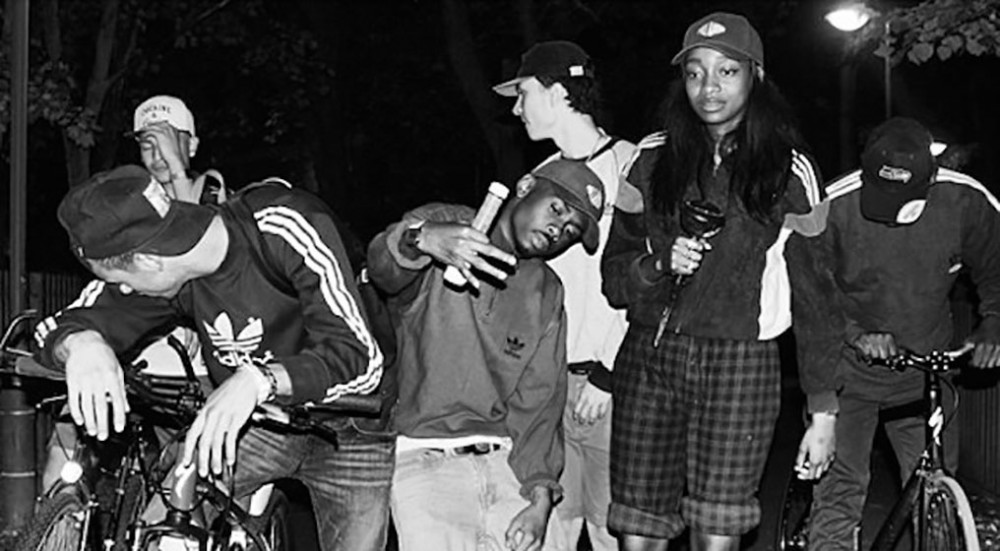 Space Age is a London foursome of rappers heralded by rising 20-year-old motormouth Little Simz. In late January, the collective, which also consists of Josh Arcé, Chuck 20, and Tilla Arcé, dropped “The Theory Of…,” their debut crew cut. The four-song EP showcases the vibe-heavy Brits’ ear for atmospheric hip-hop mastery.

All four imports have been circling a breakthrough in the United States, but it’s Little Simz whose hulking presence leads the way. She’s been cosigned by Jay-Z’s Life+Times site, and her hit-making ability is clear on The Theory Of… However, to discount the presence of Chuck 20 and the Arcés would be a mistake. Despite the fact that the American audience is much more familiar with Simz’ busy flow and infatigable delivery, Chuck 20, Josh, and Tilla aren’t just moons orbiting her sun. The Theory Of… is a syncopated and balanced EP that masters the group dynamic.

Despite the fact that Space Age’s release is so short, there’s much to unpack. At an average of four minutes per song, The Theory Of…‘s running time gives all four emcees room to breathe. Chuck 20’s turn on “Colour Blind” is the song’s finest go, and Little Simz’ recessed chorus on “No Reason” is the perfect bridge between each stanza, but Josh Arcé gives the pulse to “No Landing” with his Passion Pit-esque electronica touches, and Tilla Arcé is the lifeblood to opener “No Pressure.” But this isn’t to suggest that each song is built as a showcase for any particular performer — you could just as easily shift the focus to any contributor and name their contribution as the song’s axis.

The production of The Theory Of… is gorgeously minimalist. VNSN (“No Pressure”), Prezident Jeff (“No Reason”), Josh Arcé, and frequent Little Simz producer OTG (“Colour Blind”) blend styles perfectly with echoey keys and voice samples that give way to thumping drums. What’s most impressive about the EP is how much Space Age does with so little — no single track contains more than a handful of instruments for the rappers to work off of, but the board work fills ever corner of the speaker box, leading the Space Age cadets to stamp each an every empty moment with their percussive verses.

Yes, Little Simz will be the one lighting the marquee when her collective hits the States, but The Theory Of… is a hear indication that you should get to know her running crew before the four of them run down your blogosphere in tandem. Look out for Simz’ newest “AGE 101” mixtape coming soon, but more importantly, look for these English rhymesayers to make the biggest imprint on American hip-hop culture since Dizzee Rascal.

Enter to win tickets to see Trio Da Kali at The Villa Victoria Center of the Arts (Newton, MA) on April 10th. END_OF_DOCUMENT_TOKEN_TO_BE_REPLACED

END_OF_DOCUMENT_TOKEN_TO_BE_REPLACED

Enter to win tickets to Rhye at The Paradise on February 28th. END_OF_DOCUMENT_TOKEN_TO_BE_REPLACED

Her new album has been pushed back, but we have Kimbra’s new single for you. END_OF_DOCUMENT_TOKEN_TO_BE_REPLACED

The folk duo returns with a new record this week. END_OF_DOCUMENT_TOKEN_TO_BE_REPLACED

Now that we’re done looking back at 2017, let’s look ahead at 2018. END_OF_DOCUMENT_TOKEN_TO_BE_REPLACED

Our first Song of the Week for 2018. END_OF_DOCUMENT_TOKEN_TO_BE_REPLACED

In a year when so many things were off, the music was right on. END_OF_DOCUMENT_TOKEN_TO_BE_REPLACED