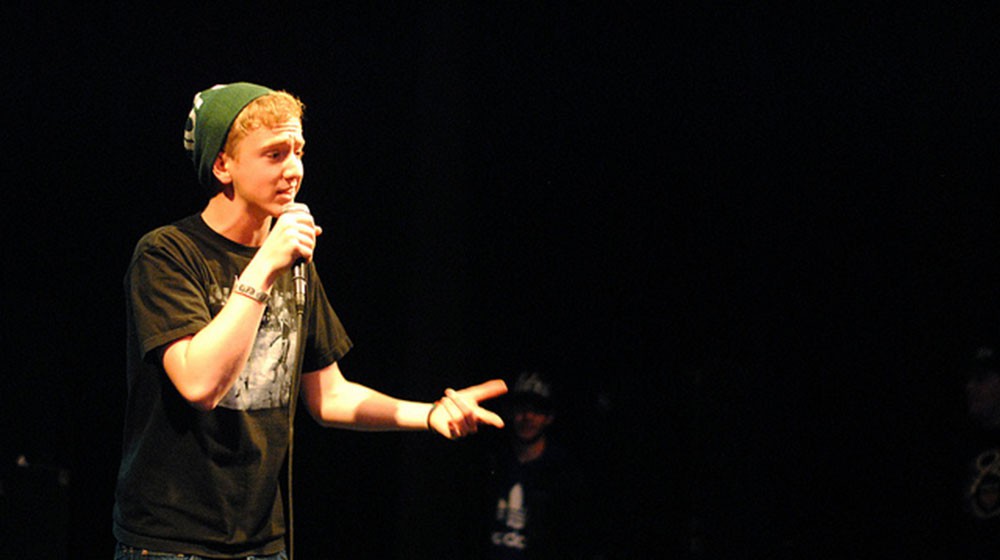 Nineteen-year-old Chicago emcee/producer Frank Leone has been hovering outside the indie rap radar for a while, and with EnterWILD, his latest mixtape, Leone stamps his Google-averse name directly on the planet.

The up-and-comer spoke at length about the prolonged process that brought this tape into existence in Chicago Reader, and it’s an interesting dive into the effort that went into the nubile rhymer’s first big statement, which also birthed an EP of b-sides. For those more concerned with the end product than the jagged journey to completion, listen below (or download here).

EnterWILD comes with the artist’s prescription to “play this in the woods,” which isn’t bad advice. As the landlocked icebergs of Massachusetts puddle in the March sunshine, the transition begs a soundtrack like “Swamp” — an baroque spiritual that vibrates with a hum that sounds like the Earth moaning in relief. For sunsetters and city-dwellers, “nIGHTCAPS” is the anthem. The distant steel drums and spacey keyboards capture the calming intoxication of a lonely nighttime spent meandering the impending thaw.

Much of the production on EnterWILD sounds like it’s straight out of a Jon Hopkins record, but all the music is courtesy of Leone himself. EnterWILD‘s aesthetic is lush and enveloping. There isn’t a harsh sound to be heard, save for some ominous drums on “WAR” courtesy of The ???????? ?????? Drumline  and a borrow from Kanye West on “MONSTERS.” Even when Leone hammers his verses with rapid, curt flourishes, the beats still swirl with an otherworldly separation, making the whole project feel like two independent universes colliding like a Venn diagram.

Though the instrumentation is all Leone’s own, the young auteur has many helpers across EnterWILD‘s 16 tracks, most notably Vic Mensa, who adds his rising star to “PREVIOUSLY: Moon.” Monster Mike’s lightning is given ample ground to strike on “MONSTERS,” and SABA’s spastic addition to “TOAD VISION” is a whimsical sprint that adds to the song’s psychedelic milieu. However, the biggest impression is left by Kate Myer, who lends Rilo Kiley-esque atmosphere to “Thunderlove,” EnterWILD‘s most hypnotizing effort.

Which is saying a lot, considering hypnosis is EnterWILD‘s chief currency. Frank Leone’s strength is his ability to capture sighs of the planet in his music, and his appeal to Gaia makes EnterWILD easily recognizable as great.

Enter to win tickets to see Trio Da Kali at The Villa Victoria Center of the Arts (Newton, MA) on April 10th. END_OF_DOCUMENT_TOKEN_TO_BE_REPLACED

END_OF_DOCUMENT_TOKEN_TO_BE_REPLACED

Enter to win tickets to Rhye at The Paradise on February 28th. END_OF_DOCUMENT_TOKEN_TO_BE_REPLACED

Her new album has been pushed back, but we have Kimbra’s new single for you. END_OF_DOCUMENT_TOKEN_TO_BE_REPLACED

The folk duo returns with a new record this week. END_OF_DOCUMENT_TOKEN_TO_BE_REPLACED

Now that we’re done looking back at 2017, let’s look ahead at 2018. END_OF_DOCUMENT_TOKEN_TO_BE_REPLACED

Our first Song of the Week for 2018. END_OF_DOCUMENT_TOKEN_TO_BE_REPLACED

In a year when so many things were off, the music was right on. END_OF_DOCUMENT_TOKEN_TO_BE_REPLACED