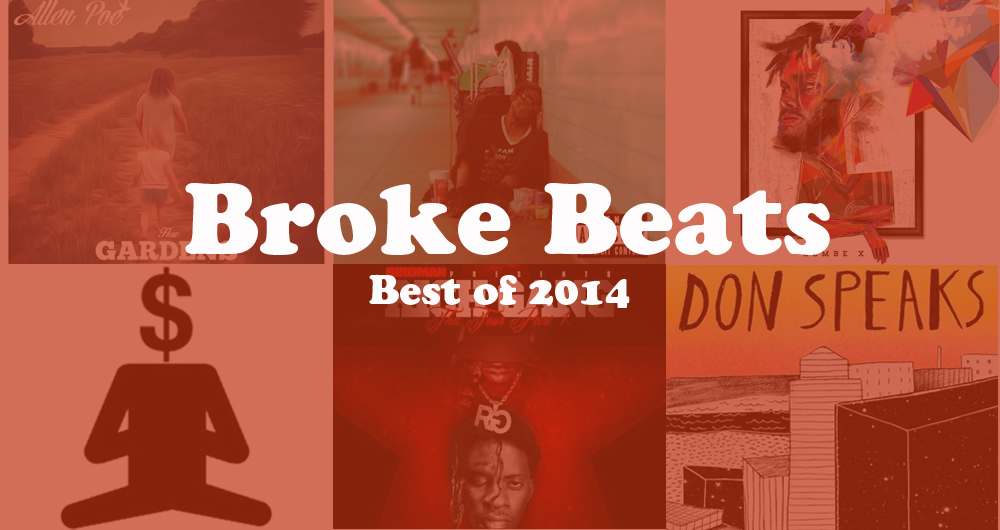 When I rekindled the Broke Beats column in May, my goal was to bring great free hip-hop to the masses. I think the column has certainly accomplished that, all the while uncovering a smattering of underground artists from the depths of DatPiff and Dj Booth.

As we’re wrapping up the year, it only feels right to revisit the top 10 freebies from 2014. Given that some of the selections from 2014 came at a cost, in the spirit of the column, this list will only include the totally gratis albums (sorry, clipping.), but, other than that, these are the best of our featrued mixtapes, full-lengths, and EPs.

This list is in no particular order because rankings are for chumps.

Rich Gang’s debut mixtape has made a lot of industry best-ofs, so it’s only fitting that the mega collaboration between Young Thug, Rich Homie Quan, and Birdman get’s a second look here. “The Tour Part 1” is a wild and raucous radio rap trip that showcases the sheer brilliance of Quan on nearly every track.
Das Racist’s Heems was also in on the Brooklyn Renaissance, and his collaborative mixtape with Riz MC absolutely bumps. “Swet Shop” harnesses Heem’s far-east sensibility and marries it perfectly with with Riz’s ear for the club in a 5-song EP that wasn’t nearly long enough.
Atlanta had a great year in rap, and Archibald SLIM championed his rising crew at Awful Records with “He’s Drunk!”. A mixtape that’s equal parts club fodder and backpack technicality, “He’s Drunk!” is tilted and whirring, showcasing SLIM’s reluctance to join any scene.
“DonSpeaks” gets through on a technicality, given that it was free at the time, even though there’s aprice tag now. Brooklyn had another hot year in hip-hop, and Donwill and Dash Speaks showcased the best production of the year in the hipster borough. “Ape Shit” is perhaps the most formidable single featured in this column this year.

Kentucky’s Allen Poe overcame a big bias in me to make this list. His enlightened brand of hip-hop defied stereotypes on “How Gardens Grow”. The inert storyteller gave Broke Beats one of the most lyrically sound entries of the year.

I have an unending amount of respect for F.Stokes, who puts so much heart into every free release. He’s the type of artist Broke Beats is built on. “Liquor Sto’ Diaries” was soulful and full of Stokes’ signature punches. With Doomtree’s Lazerbeak and Paper Tiger behind the boards, this EP is unquestionably in the top 10.

Tucson’s Isaiah Toothtaker put forth an experiment in organic rap that left a big impression in 2014. “Your Majesty” was assembled in real time by Meaty Ogre and Toothtaker, creating a funky and spontaneous EP with a dark tinge. “Block Bleeder” still stands out by making such a spooky atmosphere in a mere 42 seconds.
This heady twofer came from one of the most exciting acts coming out of Brooklyn, The underachievers. Issa Gold’s “Conversations with a Butterfly” and AK’s “Blessings in the Grey” are yin to each other’s yang, but a common thread of psychadelia ties them together.
This list is unordered, but c’mon, this EP from R&B’s worst-kept secret Jeremih and rising superproducer Shlohmo was a knockout. “No More EP” is most exciting because it’s only a preview, and both sides of this dubstep-trending duo have much left in store – even if we still haven’t gotten Jeremih’s major label album.
Kembe X’s “Kembe X EP” is a lyrical knocker that puts the 18-year-old rapper first on the list. Kembe has a chopper for a flow, and his warpath of an EP overcomes a bogus Scion co-sign to be truly memorable.