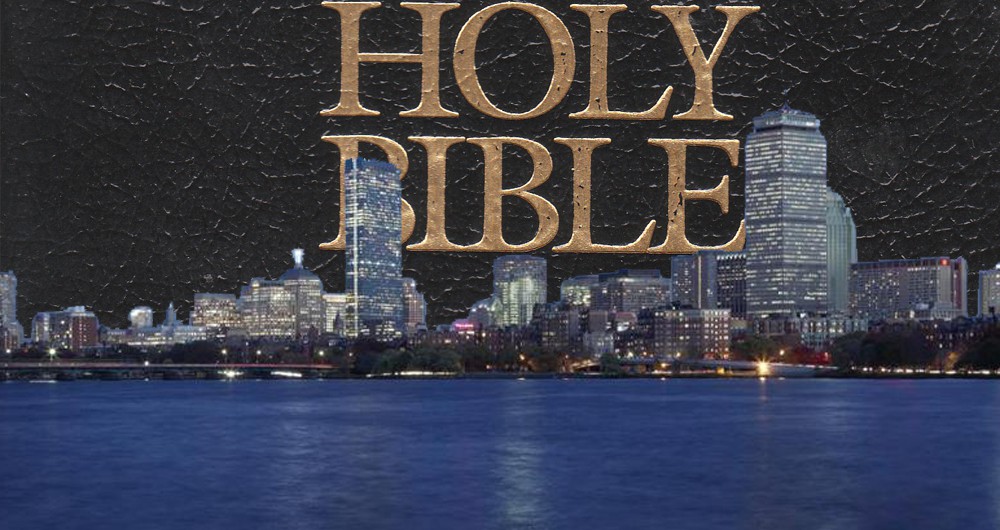 A 10-year study conducted by the American Bible Society and Barna Group has found, to the surprise of no one, that the northeast is the nation’s least Bible-minded bastion. After polling nearly 63,000 people over the last decade, the study concludes Boston to be the third least Bible-minded city in the country with Providence, Rhode Island taking top (bottom?) honors.

Depending on your own belief system, the study also makes this week’s blizzard either a normal fact of New England winter or, more likely, the wrath of a vengeful God.

It’s important to note, Bible-mindedness doesn’t necessarily equate with Godlessness; rather, it’s more a reflection of religious reading habits, according to the study:

“Each city’s Bible mindedness is determined by analyzing survey respondents’ Bible reading habits and beliefs about the Bible. The most Bible-minded respondents said they had read the Bible in the past seven days and believe strongly in the accuracy of the Bible. Nationally, only 27 percent of the population was considered Bible minded.”

Also super unsurprising, the west proved to be similarly detached from the Bible, while the Bible Belt south conversely hung tight to its own namesake reputation.

Somewhere in here is a hot #Deflategate take about how Gillette Stadium resides almost exactly halfway between Providence, the nation’s least Bible-minded city, and Boston, the third least, but I’ll leave that to the guy who argued without a hint of irony that Tom Brady is, seriously, a victim of the Liberal War on Success.

God could not be immediately reached for comment. Go Pats.

Enter to win a pair of tickets to attend The Hess Collection Seminar and Dinner as part of Boston Wine Festival 2018 at the Boston Harbor Hotel on Wednesday, March 14th. END_OF_DOCUMENT_TOKEN_TO_BE_REPLACED

Boston band Funeral Advantage is Tyler Kershaw. And Tyler Kershaw had a fun childhood, so it seems. END_OF_DOCUMENT_TOKEN_TO_BE_REPLACED

Perry put me on to daephne and the album blew my mind. END_OF_DOCUMENT_TOKEN_TO_BE_REPLACED

END_OF_DOCUMENT_TOKEN_TO_BE_REPLACED

Ted Regan of the family-owned and operated Mass Bay Lines joined me in studio this morning. This summer, Mass By Lines is celebrating their 50th anniversary by adding a variety of specialty cruises to their well-known Harbor Tours, Sunset Cruises, and Starlight Cruises. Click here to enter to win VIP passes that will get you on to any cruise for free for the entire summer! Click through to listen to my chat with Ted. END_OF_DOCUMENT_TOKEN_TO_BE_REPLACED