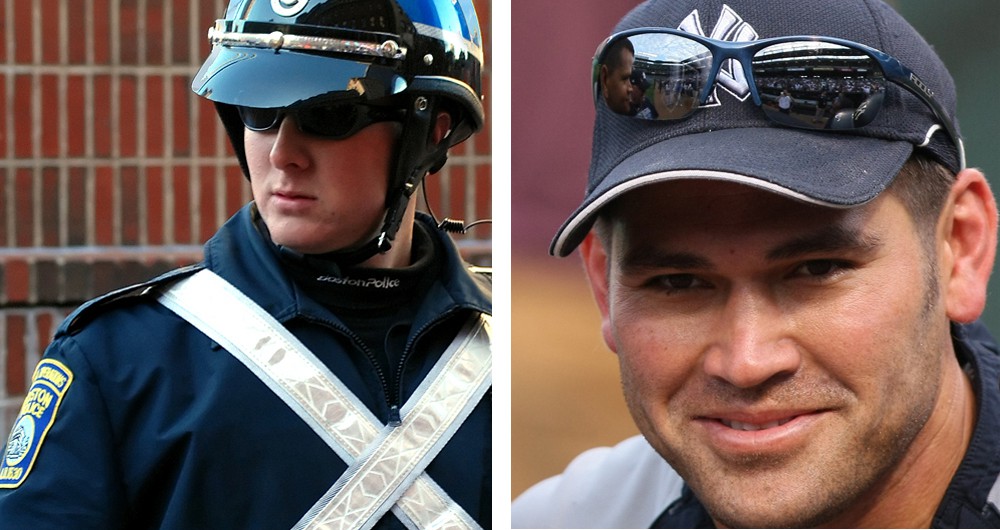 The Boston Police Department has a rather comprehensive code of conduct, as evidenced by the document itself, recently dug up by our the public records specialists at MuckRock. Reasonably so, as the police are watched closely, and carry a pretty decent chunk of responsibility.

There are few things that stand out when flipping through this manual. Section 12 instructs officers to stay awake on the job– pretty standard. Section 16 details the BPD’s drug policy– best not to do drugs if you’re a police officer. Section 9 reminds employees to be respectful and civil to the general public– a rule demonstrated perfectly by this officer who lent a jacket to Julian Edelman during yesterday’s Super Bowl Parade (although carrying guns like these in public is an offense, so technically the officer was just doing his job).

But in a city where we’ve rallied around the scruffy appearances of a team of “Idiots,” the same city that was named the most facial hair friendly city in America, it’s a surprise to see such a strict grooming policy for our officers: 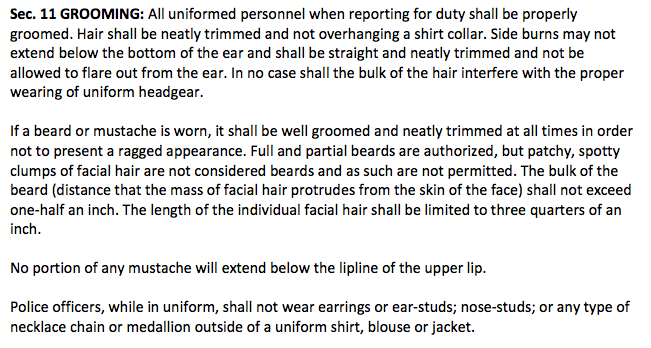 No hair overhanging a shirt collar? No sideburns past the bottom of the ear? No portion of the mustache will extend below the upper lipline (that’s arguably the best part of the mustache!)?

In 1973, observing the sloppy appearance of Thurman Munson during a singing of the National Anthem, former Yankees owner George Steinbrenner enacted the following grooming policy for his baseball team:

All players, coaches and male executives are forbidden to display any facial hair other than mustaches (except for religious reasons), and scalp hair may not be grown below the collar. Long sideburns and “mutton chops” are not specifically banned.

Some similarities, some differences, but in all, the mere fact that the Yankees don’t allow beards of any kind may give them the distinction of being lamer. It’s a good thing, too, or else we would have never been blessed with this handsome mug:

Enter to win a pair of tickets to attend The Hess Collection Seminar and Dinner as part of Boston Wine Festival 2018 at the Boston Harbor Hotel on Wednesday, March 14th. END_OF_DOCUMENT_TOKEN_TO_BE_REPLACED

Boston band Funeral Advantage is Tyler Kershaw. And Tyler Kershaw had a fun childhood, so it seems. END_OF_DOCUMENT_TOKEN_TO_BE_REPLACED

Perry put me on to daephne and the album blew my mind. END_OF_DOCUMENT_TOKEN_TO_BE_REPLACED

END_OF_DOCUMENT_TOKEN_TO_BE_REPLACED

I’m in my mid-twenties, and I’ve been working as a substitute teacher for the last couple years (I joined Teach for America right out of college). I know some of the girls in classes I teach have crushes on me — high schoolers aren’t very subtle — but I brush it off, because I’m not an idiot. Last week, however, I got a disturbing email from a girl in the English class I subbed for. Pictures were attached. You get the gist. What do I do about this situation? I obviously haven’t responded, but I’m afraid she might go Lifetime-movie on me. END_OF_DOCUMENT_TOKEN_TO_BE_REPLACED