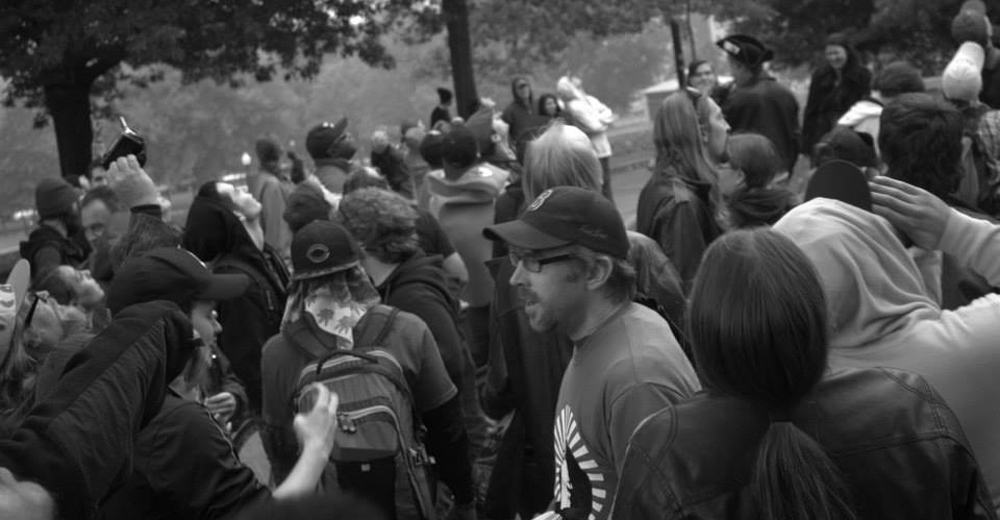 While many folks like to keep their politics at home with their pipe, some locals take it to the street. Or, on April 20, a day of celebration for the marijuana-supporting community, they’re taking it to the Common, to protest the ban on smoking in public, passed by Boston City Council last year.

The gathering started when Mike Cann, local writer, radio host, and activist, started congregating on 4/20 near the Soldiers and Sailors Monument on Boston Common with his buddy Michael Malta, AKA the “King of Pot,” about four of five years ago. “People have been going up on that hill every year since,” he says. The hill was so popular with the marijuana enthusiast crowd that it took on the nickname “Mount Mary Jane.” With Malta’s passing in the fall of 2013, the hill is taking on a new name: Mount Michael Malta.

This year, Cann and community have banded together to demand a repeal of the fine for smoking in public. “This is a young persons issue,” says Cann. “This is a class issue. This is a race issue.” It’s not just about cannabis this year, he says, it’s about tobacco, too.

“The park is where we should encourage people to go if they’re going to smoke,” Cann believes, rather than stand in front of office buildings on the sidewalk. “The city council didn’t ask the people [for their input],” he says, adding that he thinks they, “passed it quietly without any support. They know there’s no support. No one testified—but that’s because no one knew when the hearing was.”

“The whole fine thing is a lighter version of a [classist prohibition],” says Cann. “If the kid can’t pay [a $250 fine], he becomes a criminal. Who does that effect? The kid who doesn’t have the community support, the family support.”

“There are so many more important things to worry about,”  he believes– such as littering. Perhaps if there were a fine for littering cigarette butts, he could support that. But for vaping?

Cann has now been leading a monthly smoke-out/vape-out protest since January, and usually attracts a crowd of people. Many have come to view 4/20 as a holiday for all of its leisurely reasons, but Cann is quick to remind that there is a bigger message to gain from it “I think that people need to remember that there’s a celebration going on, but there’s a reason for that. People are still suffering. People still get busted. That’s why people want these laws changed.”

END_OF_DOCUMENT_TOKEN_TO_BE_REPLACED

Enter to win a pair of tickets to attend The Hess Collection Seminar and Dinner as part of Boston Wine Festival 2018 at the Boston Harbor Hotel on Wednesday, March 14th. END_OF_DOCUMENT_TOKEN_TO_BE_REPLACED

I referred to it as the “best kept secret” in Boston arts for the holidays. END_OF_DOCUMENT_TOKEN_TO_BE_REPLACED

Boston’s arts scene shines at this time of year. END_OF_DOCUMENT_TOKEN_TO_BE_REPLACED

It’s so much more than a holiday show. END_OF_DOCUMENT_TOKEN_TO_BE_REPLACED

Rock for a cause this holiday season. END_OF_DOCUMENT_TOKEN_TO_BE_REPLACED

Get out and see a show this holiday season, and save some money when you do. END_OF_DOCUMENT_TOKEN_TO_BE_REPLACED

You can help give the gift of music to kids in need this holiday season. END_OF_DOCUMENT_TOKEN_TO_BE_REPLACED

Be honest: when’s the last time you attended a Gala? END_OF_DOCUMENT_TOKEN_TO_BE_REPLACED

The October staple returns on the 21st. END_OF_DOCUMENT_TOKEN_TO_BE_REPLACED