Call it what you will–a misguided attempt at humor or just a flat-out mistake–but the Boston Comedy Festival made a misstep on Monday afternoon that led to some serious backlash from folks online.

The official Twitter account for the Boston Comedy Festival posted a tweet to hype up their all-female show, Funny Ladies, by making a remark about women not being funny.

The tweet has since been deleted, but here’s what it said: 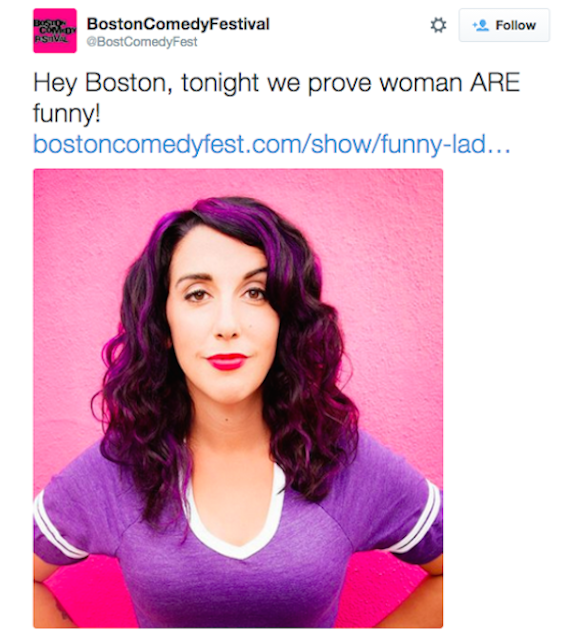 And people didn’t hesitate to call Boston Comedy Festival out.

BCF’s website describes “Funny Ladies” as a show that is “all about the ladies,” warning boys to “stand back” because “these women are funny.”

In the wake of the Internet vitriol, Boston Comedy Festival deleted the tweet, then provided this follow-up:

I'm so sorry about my idiot tweet I thought I was speaking to idiots that thought woman were not funny. But I'm the idiot. Jim McCue

FYI: Jim McCue is a comedian and the “founder of Boston Comedy Festival,” according to his website.

So far, none of the female comedians participating in Funny Ladies have commented on the tweet, nor has host Giulia Rozzi, whose photo was attached to the tweet.

BDCwire reached out to the Boston Comedy Festival for a comment but did not receive a reply.