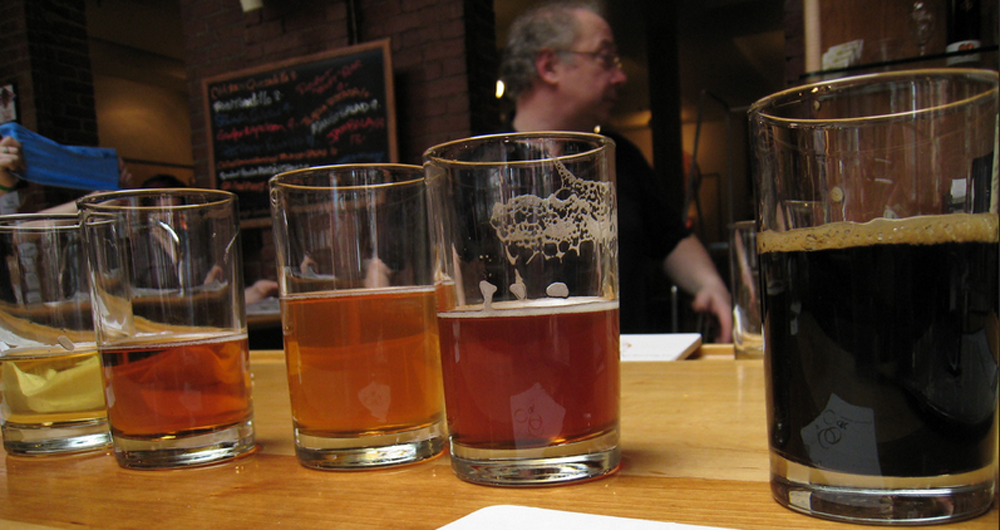 There are few styles of beer as underappreciated as the gruit. The unhopped and earthy ales, brewed before hops were widely introduced, are rooted in ancient brewing lore. And while they’ve long had their place in the history books, over the past several years a handful of brewers have devoted time to reviving the style.

The beers—unique, flavorful, and offbeat—even have their own day now: International Gruit Day.

First introduced in 2013, February 1 now commemorates all things gruit, and this year, a collective of New England brewers have collaborated to concoct three takes on the style.

Will Meyers, brewmaster at Cambridge Brewing Company, joined forces with Bryan Greenhagen, founder and fermenter at Mystic Brewery, and Butch Heilshorn and Alex McDonald, owners and brewers of Earth Eagle Brewings in Portsmouth, NH. While each brewer made their own beers for Gruit Day last year, they’ve long had a mutual appreciation for each other’s respect for the style. Following some gentle nudging from Meyers, the idea of doing a collaboration for this year came about organically.

“Will is probably the nucleus for us getting together and taking it a step further this year,” Greenhagen said. “He was one of the first in the US to brew a gruit and I think he’s absolutely delighted that it’s starting to catch on.”

Reading off a list of the ingredients that go into a gruit is a lot like thumbing through an antiquated medical manuscript. The herbs are obscure, sometimes hard to pronounce plants and unless you’re a forager, chances are you’ll have to look them up on Wikipedia, but maybe that’s part of the fun.

Each beer was roughly developed around one or two specific herbs that the brewers brought to the table but additional ingredients got thrown into the mix to augment the beer’s aroma and flavor.

To get a sense for each component, before each brew the brewers opened bag after bag of herbs and made hot water infusions, almost like making blends for a tea.

“It was very much like a jam session,” Greenhagen said of the process, “ It was more like we agreed on a key and all threw in a riff we thought would fit.”

In advance of International Gruit Day we talked to each of the brewers involved to get a sense of the strategy and creativity that went into crafting each beer. It turns out that coming up with names for the beers was the toughest part of the project.

“[Naming the beers] was the most challenging part of each brew day. Like the gruit mixes and the base styles, suggestions were made and debated again and again,” Heilshorn said.

Eventually the brewers settled on a loose, musical theme.

“I jokingly mentioned that I’d always wanted to brew a gruit named after a particularly strange Pink Floyd song called ‘Several Species of Small Furry Animals Gathered Together In A Cave And Grooving With A Pict,’ Meyers said, “I guess the Pink Floyd idea stuck and we all agreed thematically with the idea.”

A full 10-barrel batch of this beer was brewed, so it should hang around for at least a few weeks at CBC’s Kendall Sq. brewpub. The beer, a copper gruit made with grape pomace, sweet gale, licorice root, coriander, and Hawthorne berries, will go on tap Friday in advance of International Gruit Day.

For brewday Heilshorn and McDonald brought 26 pounds of pomace, the grape remains from a wine pressing, to Cambridge. The skins, pulp, seeds, and stems of the fruit came from the Portsmouth restaurant Black Trumpet Bistro, who sourced it from Andrew Bevins, an area wine blender. Heilshorn knows that brewing with pomace can be tricky but Meyers is hoping the ingredients impart a fruity and tart angle to the beer. “Wine pomace is an odd commodity to work with, it’ll be interesting to see what it does in this beer,” Heilshorn said.

CBC was one of the first breweries to commercially produce gruits – recipes for its Heather Ale and Weekapaug Gruit date back to the ‘90s – but that doesn’t stop Meyers from being in awe at the receptiveness of beer drinkers: “I am still surprised by the popularity of unhopped beers when we release them, given that we live in the world of IPA,” Meyers said. “I think craft beer fans are always looking out for whatever is new and shiny and interesting,” Meyers said, “And sometimes, just sometimes, new and shiny equals old and burnished.”

Heilshorn and McDonald have been cranking out gruits from a hole in the wall, off a side street in Portsmouth, NH for two years now. They’ve brewed around 20 gruits to date and there are usually two to four of them on tap at Earth Eagle’s cozy brewpub known affectionately as the Bunker. “Echoes,” which they brewed two barrels of, is a blonde gruit made with rose hips, yarrow, spikenard, and wild lettuce. Of the four ingredients, Heilshorn is most excited about spikenard, an earthy, spicy root that’s been around since biblical times.

Heilshorn and McDonald routinely brew colonial-era recipe recreations using bizarre and unfamiliar herbs but it was Emerson Baker, a historical archaeologist and Salem State University professor who stumbled upon a recipe calling for spikenard.

The beer, which uses CBC’s house Belgian yeast and Earth Eagle’s house saison blend, also uses yarrow, a flower with a smell similar to chrysanthemums that both CBC and Earth Eagle have brewed with in the past. “We’ve brewed with yarrow pretty extensively through the years, and it’s one of the most common herbs in gruits,” Meyers said.

EEB is planning on having at least three gruits on tap in addition to the collaborations, including Exhilaration, a “spicy, tart, and stimulating tonic.” To celebrate the holiday, they’re also planning on knocking $2 off gruit pints and 20% off gruit growlers for the day.

Now this one will go fast. Only one barrel of this beer—made with Honeybush, schizandra berries, wormwood, hyssop, honey, and dogwood berries—was brewed. Meyers believes the dogwood berries will give the gruit the mango-like tropical note that the brewers wanted to build the beer around.

Mystic is no stranger to the style. They’ve brewed a gaggle of gruits: Calluna, Roselle, Radix, Cupressa, to name a few. And while Greenhagen couldn’t say exactly which ones would make it on tap this weekend, he says the ones that worked best will return, in addition to some new ones and the collaborations. Fans should also expect to see Melissa, a recently bottled gruit brewed with lemon balm, juniper berries and lavender, on tap.

Beer enthusiasts crowded the Chelsea fermentorium’s bar on last year’s Gruit Day and Greenhagen is expecting more of the same this year.

“The realization continues to spread that gruit is about this fantastic sort of herb-blend aromatic sorcery and a lost apothecary ale making,” Greenhagen explains, “It’s certainly a big switch from IPA, but really seems to be brewers discovering a huge opportunity for creativity and the consumer just very much digging the results.”

END_OF_DOCUMENT_TOKEN_TO_BE_REPLACED

Enter to win a pair of tickets to attend The Hess Collection Seminar and Dinner as part of Boston Wine Festival 2018 at the Boston Harbor Hotel on Wednesday, March 14th. END_OF_DOCUMENT_TOKEN_TO_BE_REPLACED

This year, the festival is welcoming more female wine producers than ever before, making up 20% of all winemakers that will be at the festival. END_OF_DOCUMENT_TOKEN_TO_BE_REPLACED

The holidays are here, so raise a glass. END_OF_DOCUMENT_TOKEN_TO_BE_REPLACED

I referred to it as the “best kept secret” in Boston arts for the holidays. END_OF_DOCUMENT_TOKEN_TO_BE_REPLACED

Boston’s arts scene shines at this time of year. END_OF_DOCUMENT_TOKEN_TO_BE_REPLACED

‘Tis the season to mix a nice, stiff drink. END_OF_DOCUMENT_TOKEN_TO_BE_REPLACED

It’s so much more than a holiday show. END_OF_DOCUMENT_TOKEN_TO_BE_REPLACED

Rock for a cause this holiday season. END_OF_DOCUMENT_TOKEN_TO_BE_REPLACED

Get out and see a show this holiday season, and save some money when you do. END_OF_DOCUMENT_TOKEN_TO_BE_REPLACED