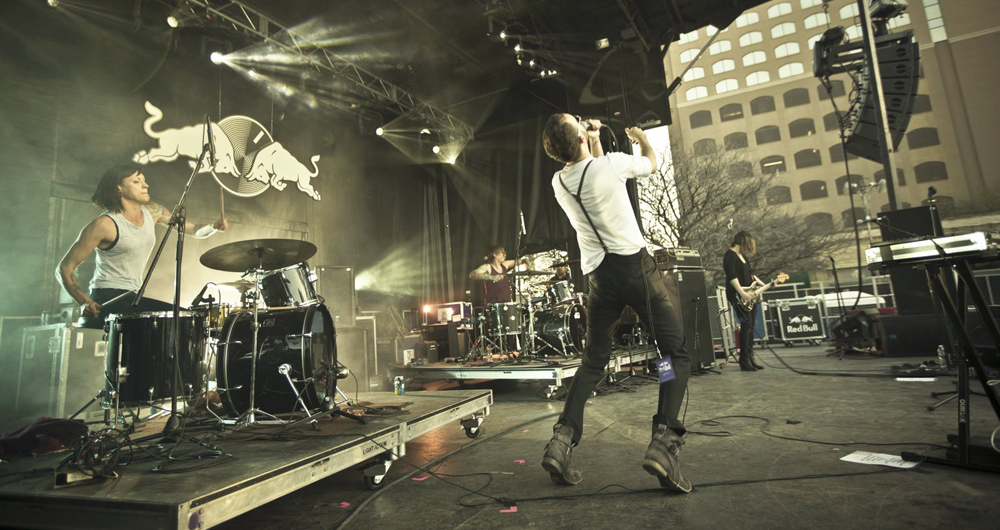 Some people believe higher academia has no business applying gradable standardization to art or music. Other people are creationists. Both groups are anti-science in certain ways, but one is wrong about pretty much everything. The other has a better track record for saying things that aren’t completely nitwitted.

For instance, Noah’s flood clearly never happened, but a robust reverence for music theory can hinder the imagination. Having no idea what the rules are makes them much easier to break. Via sheer intangible, logicless inspiration, a few humans without much, or any, technical acumen have recorded some of the greatest rock ‘n’ roll ever. But those people are unicorns. In general, performers with similarly low skill and knowledge levels are fugging awful.

But then we have Jonathan Bates – architect of voltaic, galaxy-cruisin’ dance-rock under the nom de guerre Big Black Delta – demonstrating that magical muses and the scientific approach needn’t be mutually exclusive.

“As far as music is concerned, all Western music, as we understand it, is based off of counterpoint – the movement of bass versus the counterpoint of a melody,” he explains on a chilly Nashville evening, preparing to open for electro-pop pioneer Gary Numan. Big Black Delta shall do likewise at the Paradise on Monday.

“The reason these things keep happening is because they do something to human beings universally, and I love the study of that. I don’t necessarily use it consciously, but it’s fun to explore….I like to know the reason why behind everything. Why certain tires work on certain cars, or why certain recipes make people happy. Any kind of bullshit.”

But would a mind ostensibly lopsided to the left ever utilize stereo drum kits for digital dance music? You betcha, Big Black Delta would. The synchronized thunder of drummers Chris Hornbrook (formerly of hardcore kingpins Poison The Well) and Amy Wood (noted for touring in Fiona Apple’s band) took anyone expecting to see Bates alone on stage with a synthesizer (like me) by shock at last September’s Boston Calling.

“If you’ve never sat in front of two drummers, you’ve got to try it. It’s pretty fucking rad,” he astutely observes.

Hornbrook is handling Big Black Delta’s percussion on his lonesome for this tour. Considering the exceedingly enthralling nature of many Big Black Delta tracks, we expect the fucking radness preceding Numan on Monday to more-or-less abide.

To take an educated guess, this tour stop isn’t the first event in Bate’s life to transpire on Comm Ave. Back in the day, dude moved from Florida to Allston/Brighton, and stuck around Berklee just long enough to satisfy his curiosity. After that, he absconded to L.A., and logged in a decade, give or take, with Mellowdrone – a somewhat more traditional rock outfit. Eventually, guitar band ennui compelled the construction of the starship Big Black Delta.

“I’m in a period in my life when I’m trying to go more direct,” Bates says. “It’s a different set of muscles and a different challenge. I spent all of my 20s in a guitar band, and it just got boring for me. This is more challenging and scarier, because I’m not hiding behind an instrument. It’s just me.”

Eh, well, just him and a proverbial avalanche of sonic luminosity, anyway. Tracks off last year’s self-titled sophomore LP like “Side of the Road” and “Betamax,” may urge the listener to ask questions such as: “In the future, when we’re all at least 40 percent bionic, will the human race collectively become better at dancing?” “Will our sex lives improve once we’ve all become cyborgs?” “What about after we upload ourselves onto the internet?” Meanwhile, after taking in “x22,” a listener might ask him or herself: “Is it wrong to want to kick people in the junk?” The exquisitely violent Eli Berg-directed video, one of several singular clips for the album, answers, “Under the right circumstances, no, it is not wrong.”

“I love visuals to music,” Bates notes. “So whenever we decide to do a video for something, it’s not going to be a half-assed, pouting-into-the-camera type of thing. Nobody wants to watch that.”

Enter to win tickets to see Trio Da Kali at The Villa Victoria Center of the Arts (Newton, MA) on April 10th. END_OF_DOCUMENT_TOKEN_TO_BE_REPLACED

END_OF_DOCUMENT_TOKEN_TO_BE_REPLACED

Enter to win tickets to Rhye at The Paradise on February 28th. END_OF_DOCUMENT_TOKEN_TO_BE_REPLACED

Her new album has been pushed back, but we have Kimbra’s new single for you. END_OF_DOCUMENT_TOKEN_TO_BE_REPLACED

The folk duo returns with a new record this week. END_OF_DOCUMENT_TOKEN_TO_BE_REPLACED

Now that we’re done looking back at 2017, let’s look ahead at 2018. END_OF_DOCUMENT_TOKEN_TO_BE_REPLACED

Our first Song of the Week for 2018. END_OF_DOCUMENT_TOKEN_TO_BE_REPLACED

In a year when so many things were off, the music was right on. END_OF_DOCUMENT_TOKEN_TO_BE_REPLACED