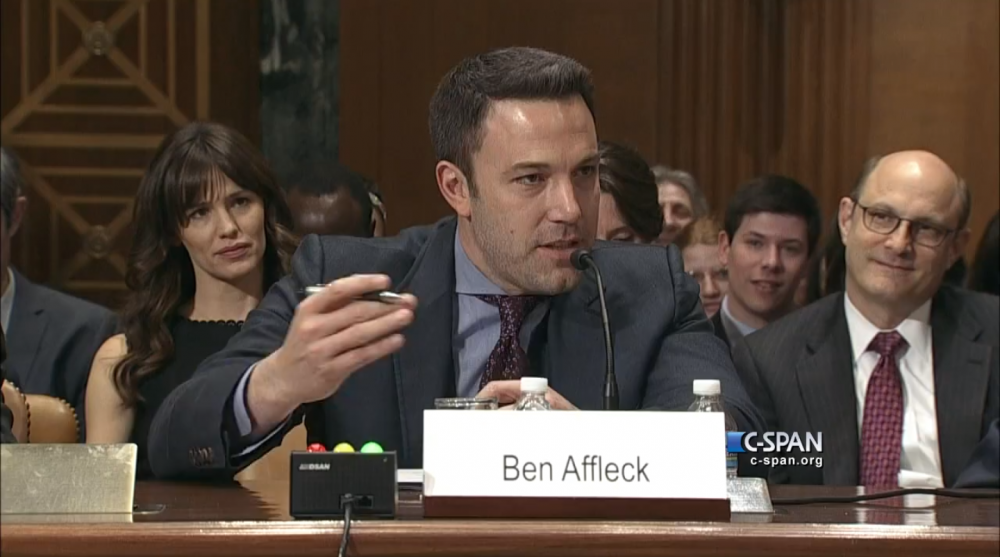 Beloved Bostonian Ben Affleck was on television today, but not on the usual channels — he was testifying at a Senate hearing on C-SPAN regarding foreign aid and international diplomacy. But before discussing this serious topic, he managed to drop a bit of a spoiler for the upcoming Batman film while giving a shoutout to a longtime New England senator.

Affleck started off his testimony to The Senate Appropriations Subcommittee on State, Foreign Operations and Related Programs by giving respect to the man who testified just before him, Bill Gates, as the “greatest and most important philanthropist in the history of the world.” Then he gave a shoutout to Vermont Senator Patrick Leahy, who has appeared in four different Batman titles dating back to 1995’s Batman: The Animated Series. “I would be remiss if I did not acknowledge my costar in Batman,” Affleck said. “His role is marginally smaller than mine — I understand you’re quite good — good morning, sir.”

Since nothing on the IMDB page for 2016’s Batman v Superman: Dawn of Justice mentions Senator Leahy, it seems safe to say Affleck dropped a casting spoiler under oath at the U.S. Senate.

Senator Leahy is a noted Batman fan, even co-writing some of the comics and anthologies while in office, and appearing in the classic party scene in 2008’s The Dark Knight with Heath Ledger.

Heroic as the Caped Crusader may be, it was Affleck himself playing the role of hero today. He was testifying in a Senate open comment session regarding the success of his non-profit, the Eastern Congo Initiative, in providing assistance to the Democratic Republic of the Congo.

Since 2010, ECI has, according to Affleck’s testimony, used strategic public-private investments to help revitalize the fledgling coffee industry in the DRC (leading to a major purchase from Starbucks), along with other efforts aimed at stimulating the local economy and raising standards of living. Kind of puts dressing up in tights and jumping from rooftops to shame, doesn’t it?

Enter to win a pair of tickets to attend The Hess Collection Seminar and Dinner as part of Boston Wine Festival 2018 at the Boston Harbor Hotel on Wednesday, March 14th. END_OF_DOCUMENT_TOKEN_TO_BE_REPLACED

Golden Globe and Emmy nominee Benjamin Wallfisch is the composer responsible for the score of the hit movie IT. I talked to Ben about his approach to scoring the new version of this iconic story and his thoughts on film and music overall. Some very insightful commentary; listen in. END_OF_DOCUMENT_TOKEN_TO_BE_REPLACED

Rupert Gregson-Williams is an award-winning film composer. He just so happened to compose the score for this summer’s big blockbuster Wonder Woman. We talked about his beginnings in film scoring, film scores that move and inspire him and, of course, Wonder Woman. END_OF_DOCUMENT_TOKEN_TO_BE_REPLACED

Jeff Rapsis is a New England-based composer and performer. Lately, he’s been creating live musical scores for silent film screenings. I talked to him about his process and a few of his upcoming performances at The Capitol Theatre in Arlington and the Somerville Theatre. You can keep track of where else Jeff is scoring silent films here. END_OF_DOCUMENT_TOKEN_TO_BE_REPLACED

Chef David Vargas, Owner of Vida Cantina in Portsmouth, NH is hosting a one-time-only event that he created to raise money for foundations supporting immigrant workers and their families. He joined me in studio with Chef Daniel Bojorquez of La Brasa in Somerville to talk about Si Se Puede – Yes We Can Dinner on Sunday, April 2. END_OF_DOCUMENT_TOKEN_TO_BE_REPLACED

Planning on seeing Rogue One: A Star Wars Story when it opens this weekend? I joined Adam 12 to give you an idea of what to expect. But don’t worry, I didn’t give anything away. END_OF_DOCUMENT_TOKEN_TO_BE_REPLACED

No, not from afar, from the comfort of her couch. From the actual awards themselves. That’s where Meredith Goldstein was for the Oscars. She shared all the juicy, first-hand details with me. END_OF_DOCUMENT_TOKEN_TO_BE_REPLACED

Boston band Funeral Advantage is Tyler Kershaw. And Tyler Kershaw had a fun childhood, so it seems. END_OF_DOCUMENT_TOKEN_TO_BE_REPLACED