Behind the Hobby: A Chat with Paul Bryant of JP Comics and Games 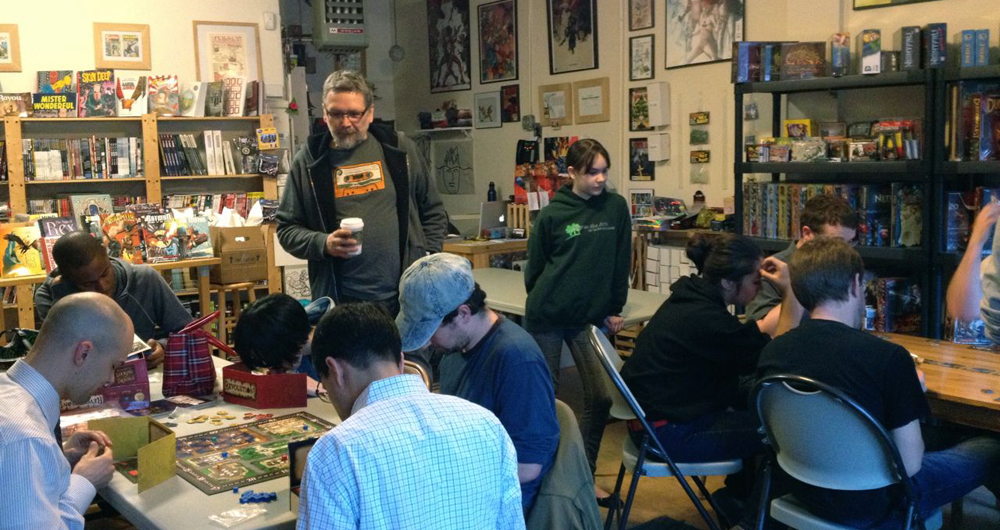 Running a comic book store is not the same as being the manager of your local CVS. It involves knowing which characters your customers love to read each week and how many boxes of the new Magic: The Gathering set to buy for your store. It also means creating an inviting atmosphere, which is easier said than done in a city like Boston.

With San Diego Comic Con in the books and Boston Comic Con kicking off this weekend, we at BDCwire figured now was the perfect time to discuss the ins and outs of owning a comics and gaming store with Paul Bryant, co-owner of JP Comics and Games in Jamaica Plain.

BDCwire: How would you describe JP Comics and Games to someone who has never gone to the store before?

Paul Bryant:  I would describe it as small but inviting shop with comics on one side and games on the other; we tried to avoid the feeling that you are entering someone’s basement or attic. Also you do not need to come in already knowing anything about comics. Just know what you enjoy in narratives and games and we can probably steer you in a good comic or game direction.

BDC: What are some of the rewards and challenges that are unique to running a comic book and gaming store?

PB: As far as unique challenges, the monthly comic orders we place are tough. The amount of choice is pretty absurd and the companies are constantly cycling through titles. You are dealing with huge lists that constantly shift and change and you are trying your best to gauge what folks will enjoy in a few months since there is a long lead time. The games are much easier to manage since the options are far fewer and there are more perennials.

The unique reward is tied to doing the above well. We get to read tons of great storytelling every week. You get pretty spoiled by comics when it comes to narrative because they have one of the best ratios of time to ideas. They are also still niche enough that crazy ideas are much more welcome in the medium than others. Playing sweet games with friendly engaging people while at work as part of it is also quite a nice bonus.

BDC: A big thing that helps any comic shop is an inviting atmosphere. Because you are a comic book and gaming store, how do you go about being approachable to two different groups of customers? I’m sure you’ve met more than a few people who only come for the comics or for the latest Magic: The Gathering set and aren’t necessarily a fan of the other aspect of the store.

PB: There is no different approach to folks who step through the door.  [I] say “hi,” try to make them feel welcome and comfortable and let them know I will do my best to help them find something or answer any questions they might have. That, and be honest. I am pretty savvy with all things in the shop that are not called Magic, so when those folks have questions I let them know what I can, but am very upfront that I don’t know about the specifics of the game.

BDC: Most of the store’s employees have a reputation for not being big Batman fans despite his popularity. What is it that the staff doesn’t like about the character?

PB: [Co-owner] Keith [Carpentier] enjoys comics outside the world of the tights and flights for the most part and [co-owner] Cole [St. Laurent].. well…  I have no idea why he is not into him. I guess Bats just doesn’t float his comic reading boat. As for me, I think that “Batman: The Animated Series” hurt the comics for me. I really enjoyed him in that and the Justice League cartoons where there was a great balance between his brooding and caring.

The comics, especially DC’s right now, are pretty dark and reading about a sad little man dressed as a bat who thinks he can punch crime away if he dumps his vast resources into bat- shaped gadgets while trying fill the void that his parents death created just does not seem fun or interesting to me.

BDC: With that said, who are some of the staff’s more favorite superheroes or favorite current series?

PB: Keith and I are digging the new Ms. Marvel, Manifest Destiny and Saga (Keith more so). Cole and I really like Prophet and Red Lanterns, and were enjoying Thunderbolts while Soule was writing it. Keith is more about worlds and settings then individual superheroes so I am not sure who his favorite superhero is…I also really like the Metal Men and Metamorpho.

As far as favorite comic series Mark Waid’s “Daredevil” has just been fantastic. It got me into the character, though I never liked him before. “Batman Beyond Unlimited” has some of the best stories in DC right now and should be a must-read for anyone who enjoyed the DC cartoons. Top spot though goes to “Prophet.” It pushes my fun buttons pretty darned hard; acid space Conan that is imaginative, brutal, beautiful, ugly, and trusting of its readers’ ability to help create. It works for me like no other comic running right now.

BDC: With Boston Comic Con right around the corner, I was wondering if you will one of the vendors at this year’s event and how are you guys preparing for Boston Comic Con?

PB: The store will not be there however me, Cole, and number of our regulars will be. I am pretty excited as it is a fantastic con that is all about comics and the people who write and draw them. You can’t get better than that at a comic convention. BCC is the poop diggity!

Enter to win a pair of tickets to attend The Hess Collection Seminar and Dinner as part of Boston Wine Festival 2018 at the Boston Harbor Hotel on Wednesday, March 14th. END_OF_DOCUMENT_TOKEN_TO_BE_REPLACED

My first Field Trip (of hopefully many) was over half-a-decade in the making. END_OF_DOCUMENT_TOKEN_TO_BE_REPLACED

Melanie Gillespie is an author and the founder of Mel O’Drama School of Acting in Milton. She was in studio this morning to talk about her latest book Darlene and the Drama Queen and how acting can help kids to develop confidence. END_OF_DOCUMENT_TOKEN_TO_BE_REPLACED

Boston Author Lauren K. Stein says her new book ‘Fresh Made Simple‘ was inspired by cooking in the kitchen with her daughter Abigail. The book isn’t just for kids, though. Listen as she describes the book and as we sample some of the recipes. END_OF_DOCUMENT_TOKEN_TO_BE_REPLACED

Boston band Funeral Advantage is Tyler Kershaw. And Tyler Kershaw had a fun childhood, so it seems. END_OF_DOCUMENT_TOKEN_TO_BE_REPLACED

Perry put me on to daephne and the album blew my mind. END_OF_DOCUMENT_TOKEN_TO_BE_REPLACED

A scenic train ride through wine country Saturday turned sour for members of a local book club; they were kicked off the Napa Valley Wine Train for allegedly laughing too loudly. END_OF_DOCUMENT_TOKEN_TO_BE_REPLACED