World Penguin Day — unarguably the world’s cutest holiday — is this Saturday, and our city’s own aquarium has something extra to celebrate. A baby little blue penguin is growing bigger and stronger behind closed doors at the New England Aquarium, while it spends more time with the ‘rents and weighs in with the staff before making its exhibit debut.

The littlest little blue (SQUEEEEEEEEEEEEEEEEE) clocked in at 630 grams and around six inches tall when we visited the Aquarium on Wednesday morning. The 23-day-old baby penguin has not yet been identified by gender — a genetic test will determine this in time — and the staff says they’ll assign a name after the bonding period. So for now, “Baby Little Blue” sticks, or as we’ll henceforth refer to him, BLB. 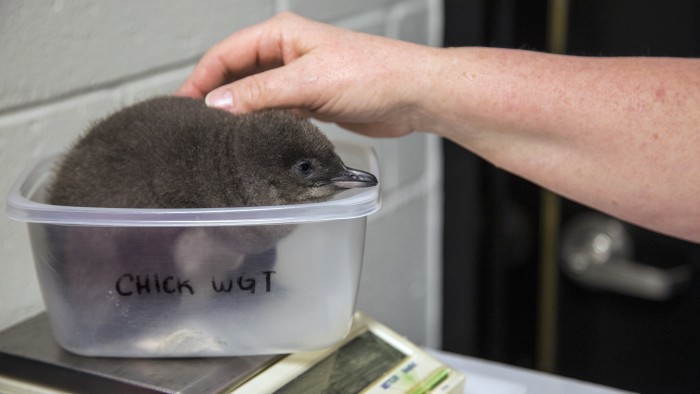 The aquarium currently has eight sets of African penguin couples sitting on eggs in the same nesting environment BLB is currently chilling in, but the chick is the lone little blue born this season. The back room that houses the penguin pairs has already earned itself a reputation earlier this week after an extremely popular AP Weird News story circled, donning the makeshift plastic nests “honeymoon suites” that were “designed to get them in the mood.”

The reality of the matter is they’re more like the lid of a kitty litter box, in a cage, lined with a cozy pad for the parents-to-be to hunker down on while they wait for their egg(s) to hatch. Also, penguin poop. A fair amount of it. Not really a bow-chica-bow-wow situation. 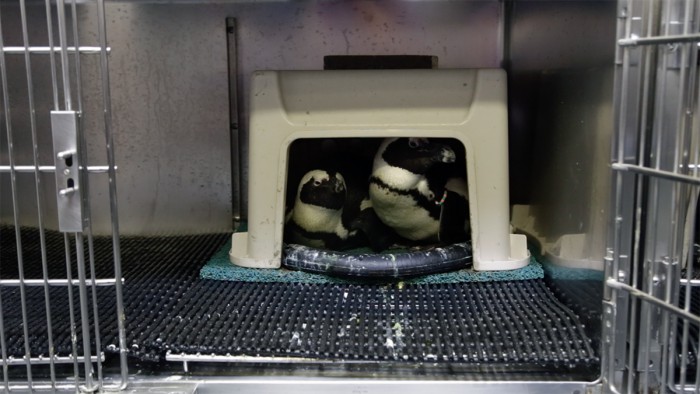 The real romance begins out of necessity, as the African penguin is currently nearing extinction, and the little blue is estimated to be close behind, in danger of disappearing from earth in as little as ten years. The NEA staff will partner up penguins from their own exhibit and other aqua life establishments based on a genetics database, introduce the potential love birds in a segmented kennel, and hope that they hit it off.

And how does a penguin flirt? “Head shaking, calling to each other, or mutually calling together with this ‘donkey bray’ signal,” said Heather Urquhert, penguin exhibit lead at the NEA.

Or as most dream dates end: “They have an ecstatic display that they’ll do together, with their heads in the air.”

According to Urquhert, the courtship could take a week or two, before “nature takes its course.” Let’s hope for the sake of cuteness, love is in the air.

Enter to win a pair of tickets to attend The Hess Collection Seminar and Dinner as part of Boston Wine Festival 2018 at the Boston Harbor Hotel on Wednesday, March 14th. END_OF_DOCUMENT_TOKEN_TO_BE_REPLACED

Lee Domaszowec from the Petco Foundation and Rebecca Baylies, Director of Development and Communications at Cape Ann Animal Aid, joined me to talk about Unleashed by Petco’s upcoming series of adoption events. They’ll be held at Brattle Square, Boston Common, and several adoption shelters throughout Massachusetts. Listen to get all the details! END_OF_DOCUMENT_TOKEN_TO_BE_REPLACED

Boston band Funeral Advantage is Tyler Kershaw. And Tyler Kershaw had a fun childhood, so it seems. END_OF_DOCUMENT_TOKEN_TO_BE_REPLACED

Perry put me on to daephne and the album blew my mind. END_OF_DOCUMENT_TOKEN_TO_BE_REPLACED

While many have called out Davis since a video of her refusing to issue a marriage license to Rowan County residents David Moore and David Ermold went viral in July, relationship columnist and gay activist Dan Savage went a step further on MSNBC Tuesday night, saying that “this is about someone hypocritcally looking to cash in”. He added: “And she is a hypocrite.” END_OF_DOCUMENT_TOKEN_TO_BE_REPLACED