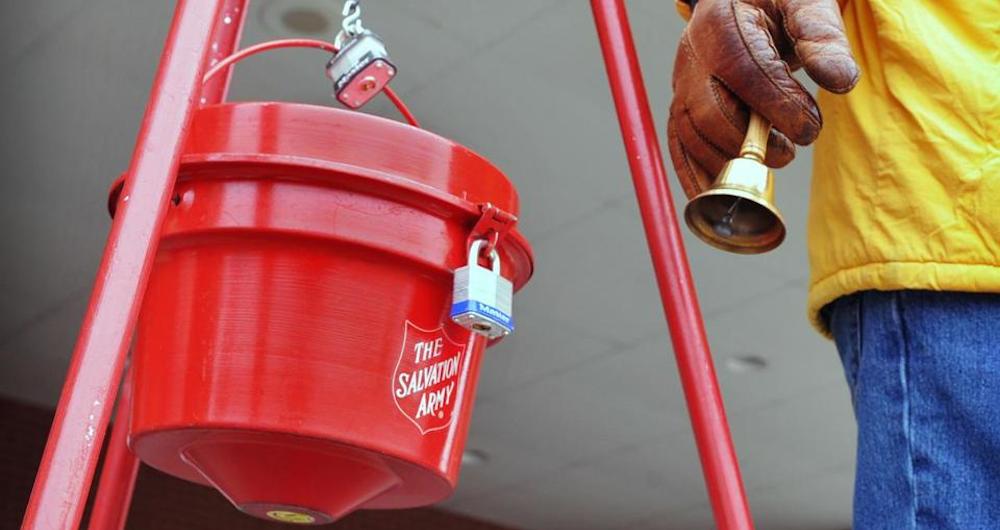 Throughout the holiday season, the sound is ubiquitous: Salvation Army workers sitting outside pharmacies, supermarkets, and on busy sidewalks, ringing their bells to encourage passerby to drop change in their kettles to raise money for those in need. But after one very special donation on Wednesday, Boston’s Salvation Army chapter has a very different ring on their minds.

An anonymous donor dropped her diamond engagement ring and her late husband’s wedding band in the red Salvation Army kettle outside North Station on Wednesday, a gift appraised at $1850.

According to a report from the Boston Globe, Salvation Army officials were stunned by the generous gift.

“In addition to money, I’ve seen watch batteries, paper clips, safety pins, all sorts of strange things, but this one takes the cake.”

In addition to the ring and band, which Harper said was the largest donation he’d ever seen dropped in a Salvation Army kettle, the donor left a note expressing her hopes that the ring would be sold for ten times its value to help the poor and needy.

“To honor his memory, I donate this ring. I’m hoping there’s someone out there who made lots of money this year and will buy the ring for 10 times its worth. After all, there’s no price on love or the sentimental value of this ring. But money will help the kids. May everyone have a Merry Christmas, Happy Holidays and Happy New Year!”

According to Harper, the Salvation Army does not usually handle donations like the ring, but are hoping to figure out a way to honor the donor’s request. Hopefully the non-profit can facilitate an auction or a charitable purchase from a particularly generous buyer.

According to the Globe, the donor’s note also featured a short proverb at the bottom: “To find out what a man is worth, take away his money and his possessions.”

What a way to ring in the holiday season.

Enter to win a pair of tickets to attend The Hess Collection Seminar and Dinner as part of Boston Wine Festival 2018 at the Boston Harbor Hotel on Wednesday, March 14th. END_OF_DOCUMENT_TOKEN_TO_BE_REPLACED

We ate vegan blueberry cake and it was amazing. END_OF_DOCUMENT_TOKEN_TO_BE_REPLACED

Dan Croll is a great musician and an even better person. END_OF_DOCUMENT_TOKEN_TO_BE_REPLACED

We kicked off the weekend with a visit from Sasha Purpura, Executive Director of Food For Free. Sasha was back to promote next month’s Craft for a Cause event, a craft beer festival celebrating the Central Square Cultural District. END_OF_DOCUMENT_TOKEN_TO_BE_REPLACED

Summer is the hungriest time of the year. Millions of kids rely on school meals, but in summer, the meals disappear. HGTV’s Taniya Nayak was in studio this morning to talk about Taste of the Nation this coming Tuesday, June 6, which benefits Share Our Strength’s #NoKidHungry initiative. Click here to get your tickets. END_OF_DOCUMENT_TOKEN_TO_BE_REPLACED

Community Servings provides nutritious meals to individuals and families living with a variety of illnesses. Stephanie Carrigg was in studio this morning to talk about this year’s Meals4Moms program, where your contribution not only helps feed moms in need, but nets you some great goodies for a mom in your life. END_OF_DOCUMENT_TOKEN_TO_BE_REPLACED

Continuing our month-long series spotlighting videos we hope will inspire you think. END_OF_DOCUMENT_TOKEN_TO_BE_REPLACED

The first in a month-long series focusing on new songs that go a little deeper. END_OF_DOCUMENT_TOKEN_TO_BE_REPLACED