An Edward Snowden Monument Has Popped Up in Brooklyn

Plenty of controversial American figures have had statues erected in their honor – why not famed NSA whistleblower Edward Snowden?

Such was the logic of three artists who, according to Animal New York, snuck into the Prison Ship Martyrs Monument in Fort Greene Park in Brooklyn, NY. They installed a full-sized bust of Snowden in the dead of night, a guerrilla effort that will likely only stand for a limited time.The artists’ intent was to memorialize over 11,000 American prisoners of war who died on British ships during the American Revolutionary War era.

The choice of location, the anonymous artists told Mashable writer Bryan Ries, was highly intentional, as the artists believe that Snowden’s actions were “a continuation of a story that began at the beginning of this country.” Fort Greene Park is representative of captured Americans, a sentiment the artists think all surveilled citizens can relate to on some level. 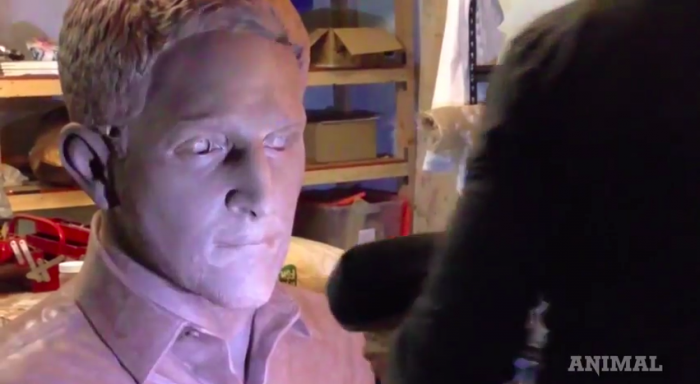 All three artists have been hard at work on the project for well over a year – two had been toiling at the subtle planning necessary to get the bust in place while the third actually created the monument.

“We feel that Snowden’s actions really continue that story,” the artists continued. “It is built upon a set of ideals to live freely, not be confined or surveilled or monitored by your government. You can’t have freedom of expression to pursue liberty if you feel like you’re doing it under a watchful eye.”

Though it’s highly unusual for controversial guerrilla art to remain in place for very long after its installment, the artists remain hopeful that the city will consider leaving the Snowden bust where it is, saying that it was specifically designed for the park and location. 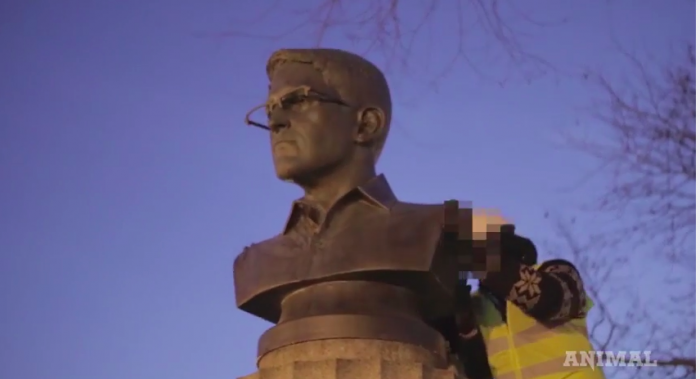 “It’s not just about Snowden. It’s about the ideals that he was trying to work towards and push others to care about,” they continued in their statement.

The timing of the bust’s installment is perfect after Snowden made an appearance on HBO’s Last Week Tonight with John Oliver just last night – you know you’ve become a folk hero if one of the world’s most famous comedians is willing to fly ten hours to talk to you.

“We’re wondering if on the long arc of time Snowden will be considered a hero, too,” they concluded, a question that likely nips at the heels of the man himself.

Artists for Humanity Co-founder Jason Talbot and Major Gifts Director Emily Smaldon were in studio this morning with Mallory Bazinet, Event Manager for GrandTen Distilling. Jason and Mallory talked about The Contemporaries, their upcoming event to launch a new patron group for young professionals. Click here to join them on Thursday, August 17! END_OF_DOCUMENT_TOKEN_TO_BE_REPLACED

Aida Villarreal-Licona is the Events Coordinator for SoWa Boston’s Art & Design District. She was in today to talk about their holiday shopping event this Thursday December 15 from 4-8 p.m. at 450 Harrison Avenue. A great opportunity to help local artists and get some holiday shopping done! END_OF_DOCUMENT_TOKEN_TO_BE_REPLACED

Natalie Lemle was in to talk about ArtLifting, a program that aids homeless and disabled artists. Currently, 72 artists in 11 states are receiving 55% of all profits from your purchase of their artwork and photography. Click “more” to hear my chat with Natalie and to see work from one of the artists. END_OF_DOCUMENT_TOKEN_TO_BE_REPLACED

It’s no secret that Bostonians like to show their Patriot pride with tattoos. Who can forget the awesome guy who got that sweet Bill Belichick arm tattoo? Or the less-awesome guy who showed off his full-head Tom Brady helmet tattoo in his mugshot? END_OF_DOCUMENT_TOKEN_TO_BE_REPLACED