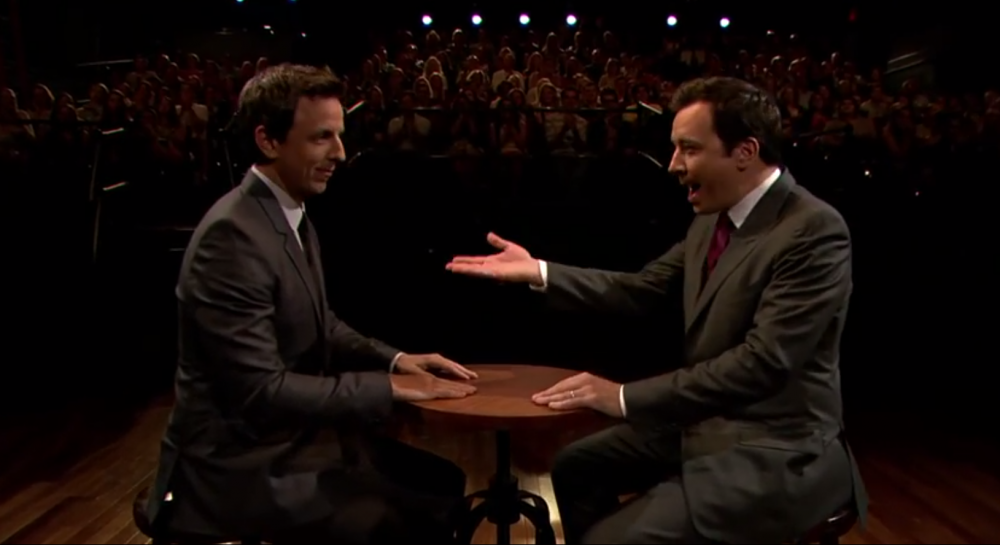 Last week we saw the debut of Jimmy Fallon on “The Tonight Show,” and it was an event that seemed to last the whole week. Now, we’re getting a first taste of Seth Meyers in the “Late Night” seat. He’ll have plenty of help from other funny folks stopping by too. Just watch out for Kanye.

Boston’s own experimental folk duo You Won’t has been touring the States for the past month or so. The same band that graced the stage at Boston Calling and the Boston music Awards will now get some face time on Carson Daly’s late night show for those of you night owls who like to support local music.

Maybach Music Group founder and Florida rap sensation Rick Ross has landed at the center of many controversies, seemingly without ever leaving the VIP section of the club. He finds the best ways possible to get himself there though, and he will pay a visit to the most likeable man on late night tonight.

With a role on the rising Comedy Central hit “Broad City,” deadpan stand-up man Hannibal Burress has become a household name. The comedian will get some giggles tomorrow night to close out Jimmy Fallon’s show.

Annie Clark, AKA St. Vincent, got her start studying music right here in Boston at Berklee. Now she has established herself as one of the most electrifying solo acts in music, having put out several extraordinary albums and collaborated with Talking Heads frontman David Byrne. St. Vincent will stop by “The Colbert Report” in support of her new self-titled album.

So, it might not be the coolest thing in the world to like John Mayer, depending on who you are. One thing is for sure though: that boy can play a mean guitar. He does it best too, when he’s performing with the John Mayer Trio – not with girlfriend Katy Perry (barf).

“Saturday Night Live” golden boy Seth Meyers makes his debut as the new host of “Late Night” with the help of his former “Weekend Update” anchor Amy Poehler. As far as guests go, it doesn’t get much better than her, but just to achieve a balance (or maybe because another powerful D.C. resident stopped by Fallon last week), Vice President Joe Biden is also on the list. Not a shabby way to start things off.

The only thing that may be harder on the nerves than filling the “Late Night” shoes of Jimmy Fallon, is following it up by welcoming Kanye West as a guest on episode two. The rapper/producer/designer/director/artist/celebrity/personality has history of not getting along with late night hosts (remember #alldisrespecttoJimmyKimmel?), and is extremely unpredictable at all times, so this should be interesting. Best of luck to Seth Meyers.

The “House of Cards” star continues to make his rounds on the talk show circuit. Last week on Letterman, he <ahref=”http://www.boston.com/sports/blogs/obnoxiousbostonfan/2014/02/kevin_spacey_named_his_dog_boston_video.html” target=”_blank”>chatted about why he named his dog Boston. Maybe we’ll get some more stories about our lovely city.

It has been a few years since either of these two were at the top of their game. It’s been even longer since they teamed up for “The Wedding Singer.” That doesn’t mean that Adam Sandler and Drew Barrymore aren’t still a delightful pair. Catch them with Fallon on Wednesday.

The mastermind behind “Girls” has been the topic of many a conversation (and controversy) since her show launched on HBO in 2012. Some call her one of the smartest figures in television, others can’t stand her. One thing is undeniable: whenever there is an excuse to do so, people go bonkers over her. She’ll help Seth Meyers get cooking in his first week on “Late Night.”

Comedian Myq Kaplan is a comedian named Myq Kaplan. He joined me in studio this afternoon, and he’s at Laugh Boston this weekend. Click here for tickets. END_OF_DOCUMENT_TOKEN_TO_BE_REPLACED

My goodness, I love Sue Costello. It was great having her back in studio today to talk about her one-woman show, #IAmSueCostello, playing tonight at the Revere Hotel. Click here for tickets. END_OF_DOCUMENT_TOKEN_TO_BE_REPLACED

Trump Takes On…Boston! is running now through election night at Laugh Boston. David Carl was back in studio this afternoon to talk about bringing Donald Trump to the stage, the cathartic element (for both him and the audience) and how audiences have been reacting so far. END_OF_DOCUMENT_TOKEN_TO_BE_REPLACED

Trump Takes On…Boston! has arrived at Laugh Boston. I had comedian David Carl, who is portraying Trump, in studio this morning to talk about the show. END_OF_DOCUMENT_TOKEN_TO_BE_REPLACED

Lachlan Patterson made me laugh this morning. Let him make you laugh this weekend at Laugh Boston. Click here for tickets, and click “more” to hear our conversation. END_OF_DOCUMENT_TOKEN_TO_BE_REPLACED

Always a pleasure to have Boston.com’s Perry Eaton in studio for a chat. After we talked a bit about Pearl Jam at Fenway and Perry’s new podcast, he filled us in on Game of Thrones live and Narragansett’s new Bananagrams-themed brew. END_OF_DOCUMENT_TOKEN_TO_BE_REPLACED

It was great to have Alonzo Bodden back in the RadioBDC studio this morning. Don’t miss him at Laugh Boston this weekend! Click here for tickets and info, then click through to hear my interview. END_OF_DOCUMENT_TOKEN_TO_BE_REPLACED