Al’s Deli: disappearance still unclear, but is a sign of the times in Mission Hill

For years, hungry college students and food fanatics have made the uphill trek to 1508 Tremont Street in Mission Hill to taste the mouthwatering subs at WAN Convenience.

On any given day, the smell of sizzling meats mixed with an array of spices would permeate from the quaint Mission Hill sandwich shop, drawing in legions of ravenous customers who didn’t mind waiting a few hours in line.

Better known as Al’s Deli to the initiated, the eatery oozed with personality, featuring menu items named after the likes of David Ortiz and Richard Pryor, as well as a painting of Yoda that served as the pièce de résistance of the shop’s bohemian décor. Even more endearing than the deli’s ambiance was purveyor Winston “Al” Niles’ larger-than-life persona. 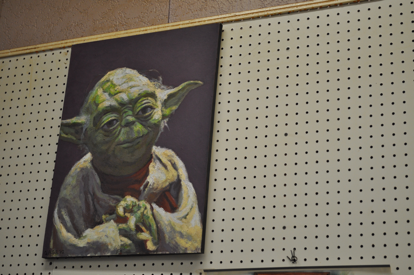 This combination of food and charm recently earned the local legend some national recognition, as his small operation became the focus of a soon to be released episode of Adam Richman’s upcoming Travel Channel series.

While things were looking up for Al’s Deli just a few months ago, these days, it’s a much different story.

Today, the long lines and attractive aromas have been replaced with boarded up windows and a cryptic sticker that reads, “WAN’s is evolving, not closing,” accompanied by an email address customers can contact in order to find out when – and where – Niles will set up shop next.

But it has been months since anyone has heard anything about the move, rumored to be caused by the ending of Niles’ lease with the building, and attempts to reach out to the enigmatic sandwich maker have been met with a veritable silence.

Niles’ absence from the area’s dining scene has even been felt online, as loyal customers have taken to Reddit in order to voice their sorrow over the shop’s apparent closure.

“I drove by today and saw it was boarded up,” said one user. “Anyone know what’s up? Should I kill myself now?”

“Bizzy bone and pastrami sandwiches will live on in infamy,” remarked another user. “Really hoping he can open up a new shop!”

As news of the deli’s return continues to be non-existent, it begs the question: Where in the world is Al Niles? But, an even more important question may be: What does this mean for his neighboring local business owners?

It’s no secret that the Mission Hill area has become gentrified over the years, caused by an influx of college students to the once family-filled neighborhood. Accompanying this change in demographic has also been the installment of many big-name businesses and nationally known chains.

Within the span of about a half a mile, a Stop & Shop, a TGIF Fridays, a Subway, a 7-Eleven, a Domino’s, and two Dunkin Donuts can be found on or adjacent to the same street. While there are plenty of mom-and-pop businesses surrounding these larger outfits, it may not last that way.

Building owners in the area may look to – or already may have – raised the prices of their leases because they think they can get more in return from a bigger company.

While this may or may not be the exact reason why Niles decided to close his shop at 1508 Tremont Street, a similar scenario is what forced him into the sandwich business in the first place. 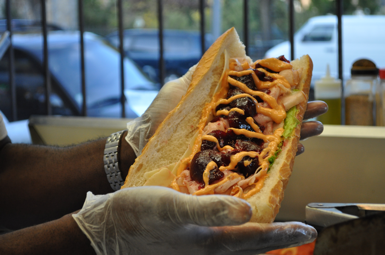 In an interview with Boston.com last December, Niles revealed he opened the shop as just a regular convenience store, until the opening of a Stop & Shop in Brigham Circle in 2006. It was then that he noticed his business slipping, which sparked his idea to get into the food industry.

“I used to sit over there and watch the guy next-door always packing a crowd,” Niles said. “I said, ‘I can do that, too’, that [doesn’t] seem to be that hard.”

If the loss of this legendary deli is a sign of things to come, Niles may not be the only treasure Mission Hill loses.

Enter to win a pair of tickets to attend The Hess Collection Seminar and Dinner as part of Boston Wine Festival 2018 at the Boston Harbor Hotel on Wednesday, March 14th. END_OF_DOCUMENT_TOKEN_TO_BE_REPLACED

It’s been a crazy week with all the snow. We need a drink. END_OF_DOCUMENT_TOKEN_TO_BE_REPLACED

Amazing sandwiches for a good cause? Make a bunch for us! END_OF_DOCUMENT_TOKEN_TO_BE_REPLACED

And they came to our studios, too! END_OF_DOCUMENT_TOKEN_TO_BE_REPLACED

It’s almost time send off 2017 and welcome in 2018, and we have some ideas about how you can do precisely that. END_OF_DOCUMENT_TOKEN_TO_BE_REPLACED

The pics alone will make you want to make a reservation. END_OF_DOCUMENT_TOKEN_TO_BE_REPLACED

Some people love cooking for the holidays. Others, not so much. END_OF_DOCUMENT_TOKEN_TO_BE_REPLACED

There’s so many to keep track of, you might have missed this one. END_OF_DOCUMENT_TOKEN_TO_BE_REPLACED

Looking to add a little more “cheers” to your holiday cheer? Pabu can help you. END_OF_DOCUMENT_TOKEN_TO_BE_REPLACED