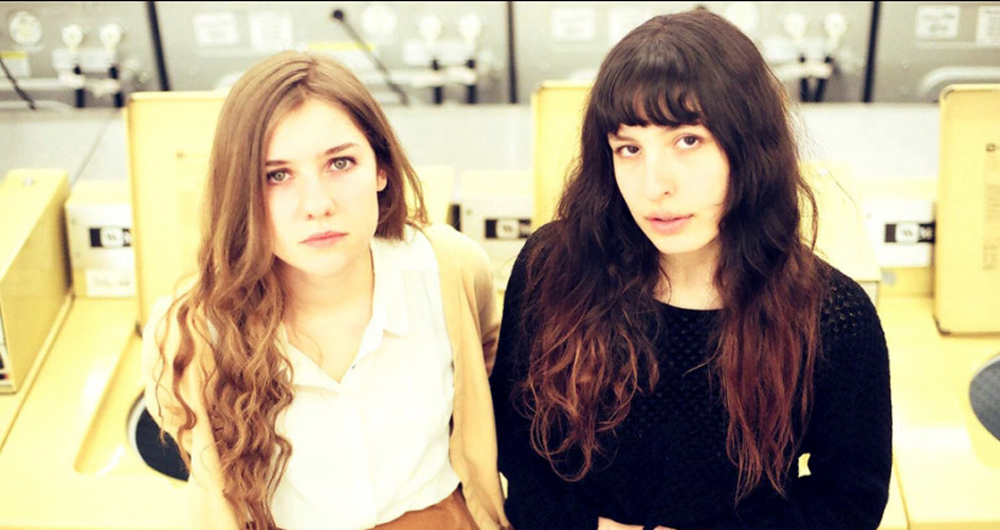 A little bit of background: Fat Creeps began when guitarist Gracie Jackson and bassist Mariam Saleh bonded at an open mic night on the North Shore. At the time, the two were both disheartened by their fellow open mic goers and in a swift one-two, “I said, ‘I heard you play guitar. That’s cool, I don’t play any instruments but, uh, I pretend to, so like, you wanna start a band?” Saleh told the Dig. According to the duo, they began jamming together and playing as a two-piece where yelling was the focal point.

Since then, the duo has picked up a drummer and matured into a dreamy lo-fi sound that swoops you in and says, “stay a while, why don’t you?” Don’t worry, there’s still plenty of yelling on “Secrets” off of their 2012 self-titled EP.

Why you should care: List the female-fronted bands blossoming in this scene right now, and see if you can get to two hands.* OK, I’ll give you another minute or two. With a loyal following in both Boston and beyond, nabbing spots on impressive bills, like with Canadian act The Courtneys earlier this year, and earning positive nods from the likes of Spin and Tiny Mix Tapes, Fat Creeps is a name that keeps on growing.

Fun fact: Jackson is a volunteer guitar teacher at Girls Rock Boston this summer, a week long program for youth, working to empower girls by encouraging positive self esteem through music education and performance.

Press play: Check out Fat Creeps’ music video for “Back 2 Skool” below for some silliness and some sick dance moves.

Like what you hear? Catch the trio TOMORROW (yes, tomorrow) tucked away at the Middle East Upstairs in Central and kick off your weekend early! 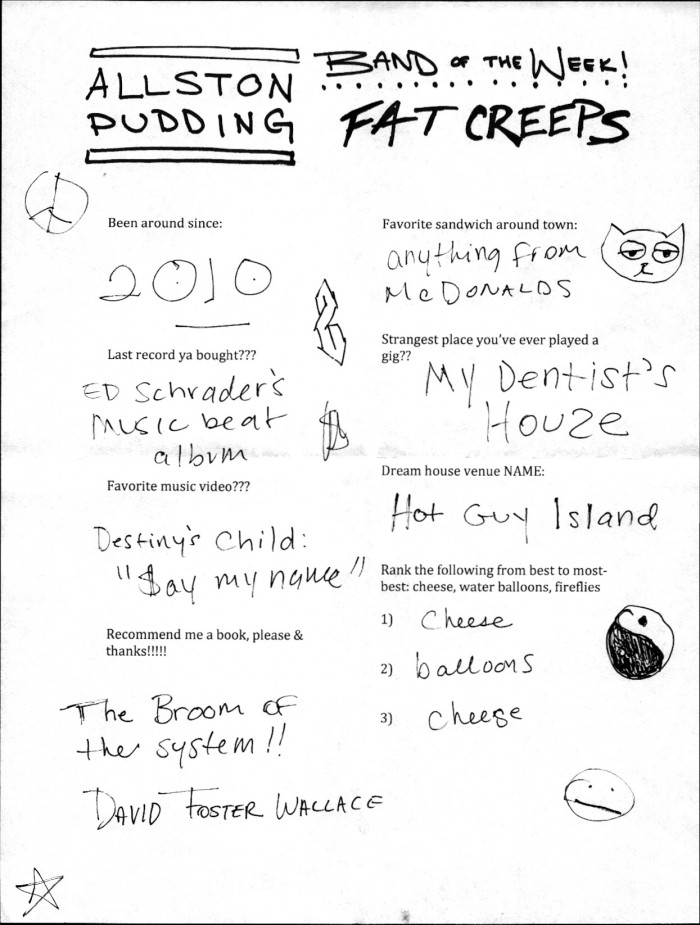 *Note: Allston Pudding would like to clarify that there are tons of great female musicians in Boston. They must be particularly giddy about Fat Creeps’ recent successes.

Perry Eaton writes for Boston.com. Perry Eaton talks on the radio with me from time to time. Today, he talked to me about what he’s been listening to and some upcoming shows and festivals worth checking out. Click here to read more. END_OF_DOCUMENT_TOKEN_TO_BE_REPLACED

In some ways, Palehound has always had a home in Boston. END_OF_DOCUMENT_TOKEN_TO_BE_REPLACED

Kal Marks is the kind of band that sneaks up on you. Whether you’re experiencing them at some basement show in Allston, or in an opening set for Pile at Great Scott, you may not see them coming, but they’ll immediately click. The combination of heavy sludgy riffs and lead singer Carl Shane’s unique crooning bowls you over. It’s dark and it’s compelling, but most importantly, it’s really earnest. END_OF_DOCUMENT_TOKEN_TO_BE_REPLACED

It’s not very often that some of the most talented performers in Boston are set to grace the same stage in a single night. This Sunday marks the 1 year anniversary of Mind Spray, a local hip-hop open mic and showcase series devised by promotion and booking company The Brain Trust. END_OF_DOCUMENT_TOKEN_TO_BE_REPLACED

There’s been a lot written about Street Dogs evicting a group of neo-Nazis from the pit at their House of Blues, Anaheim show on St. Patrick’s Day. You don’t need to read any of it. Just listen to front man Mike McColgan tell the story. He talks about joining his old band, Dropkick Murphys, on stage in Boston last week, too. END_OF_DOCUMENT_TOKEN_TO_BE_REPLACED

It’s not her best. END_OF_DOCUMENT_TOKEN_TO_BE_REPLACED

When in Nashville, do as the locals do. Since relocating to Tennessee a few months ago, this seems to have been Steven Tyler of Aerosmith’s approach after announcing in an October Twitter Q&A session that he intended to record a country album, an endeavor he’s well in the process of completing. END_OF_DOCUMENT_TOKEN_TO_BE_REPLACED

“I’m Shipping Up To Boston” just turned ten years old. Boston.com’s Matt Juul put this piece together on the history and significance of the Dropkick Murphys song, then joined me in studio to talk about it. END_OF_DOCUMENT_TOKEN_TO_BE_REPLACED

Boston is a city known for it’s Irish heritage, and it’s celebration of it. Two main traditions have held strong in Boston: the St. Patrick’s Day Breakfast and subsequent Parade. But I argue there is a third now: seeing the Dropkick Murphys at the House of Blues during their multi-night March Residency. END_OF_DOCUMENT_TOKEN_TO_BE_REPLACED

Sure, you might see a punk show on Monday and a chillwave band on Thursday and so on, but usually you favor one sound over another because you’re a busy bee and time is honey. It’s been the same for years, and the Prefab Messiahs can vouch. END_OF_DOCUMENT_TOKEN_TO_BE_REPLACED