Accessible By T: 5 Breweries Around Boston That are Worth the Trip

To go along with this sweet late summer weather, we thought letting you know about some of the golden nectar (beer) that is available a short jaunt outside Boston was a swell idea. While new microbreweries seem to be popping up every year, here are our favorite spots to get a pint or two of what we think is the elixir of life!

This little jewel is located smack dab in downtown Haverhill.  It has both a 10-barrel brew house and restaurant.  They keep a year round selection plus a long list of seasonal brews to scope out while munching on some classic pub grub.  And when you’re done, feel free to take a stroll along the Mighty Merrimack.


Directions:  Take the Haverhill commuter rail line out of North Station and jump off at the end of the line (Haverhill).   Tap Brewery is a five minute walk from the station. How convenient! 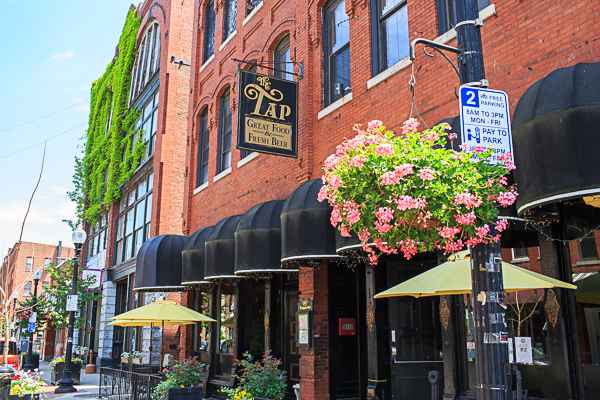 The people at Night Shift Brewing put all their efforts into their beer and it clearly shows– they have some pretty unique beers here.  If you have an extensive palette, then definitely don’t miss out on some of their more adventurous offerings.  Oh, and you can bring your own grub if you think you’ll be hungry while you sample their amazing suds.


Directions:  Take the orange line towards Oak Grove.  Hop off at Wellington Station.  Head up River’s Edge Drive for 200 feet. Turn right onto Route 16 Revere Beach Parkway for .3 miles. Turn left onto Santilli highway for 300 feet.  Stay left on Santilli highway and Night Shift will be on your left.

These people do it all — milling, brewing, cellaring, packaging and warehouse operations are all done on site since 2007.  They have it down and it shows in their beer.  With inspiration coming from the — you guessed it — Pilgrims, you will find a wide range of traditional brews there.  Hop on down to Plymouth, check out that historic rock and head over to Mayflower Brewing.


Directions:  From South Station, grab the Logan Airport/Hyannis train towards Hyannis Transportation Center.  Get off at the Plymouth Park/Ride Lot Exit 5.  Grab the Pilgrm bus and get off at Plymouth Center.  Hit up the Liberty to the West Plymouth Plaza.  Head North to Plympton Road. Rt 80. Turn Right onto Commerce way. Turn right onto industrial Park way.  Turn right onto Industrial Park Road.  Turn left onto Resnik Road and Mayflower Brewing is on your left. 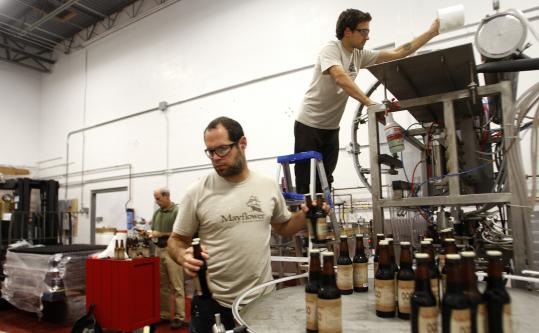 This brewery is also a pub where you can get all the freshest seafood available.  Located on the docks of Gloucester, this place has it all: delicious food, a view, arcade games and of course delicious brews. Hit this spot up after a day at the beach and you won’t be sorry.

Directions:  From North Station take the Rockport commuter rail line to the Gloucester Station.   Take a right onto Railroad Ave.  Turn left onto Washington street.  Walk for 8 minutes and you’re there. 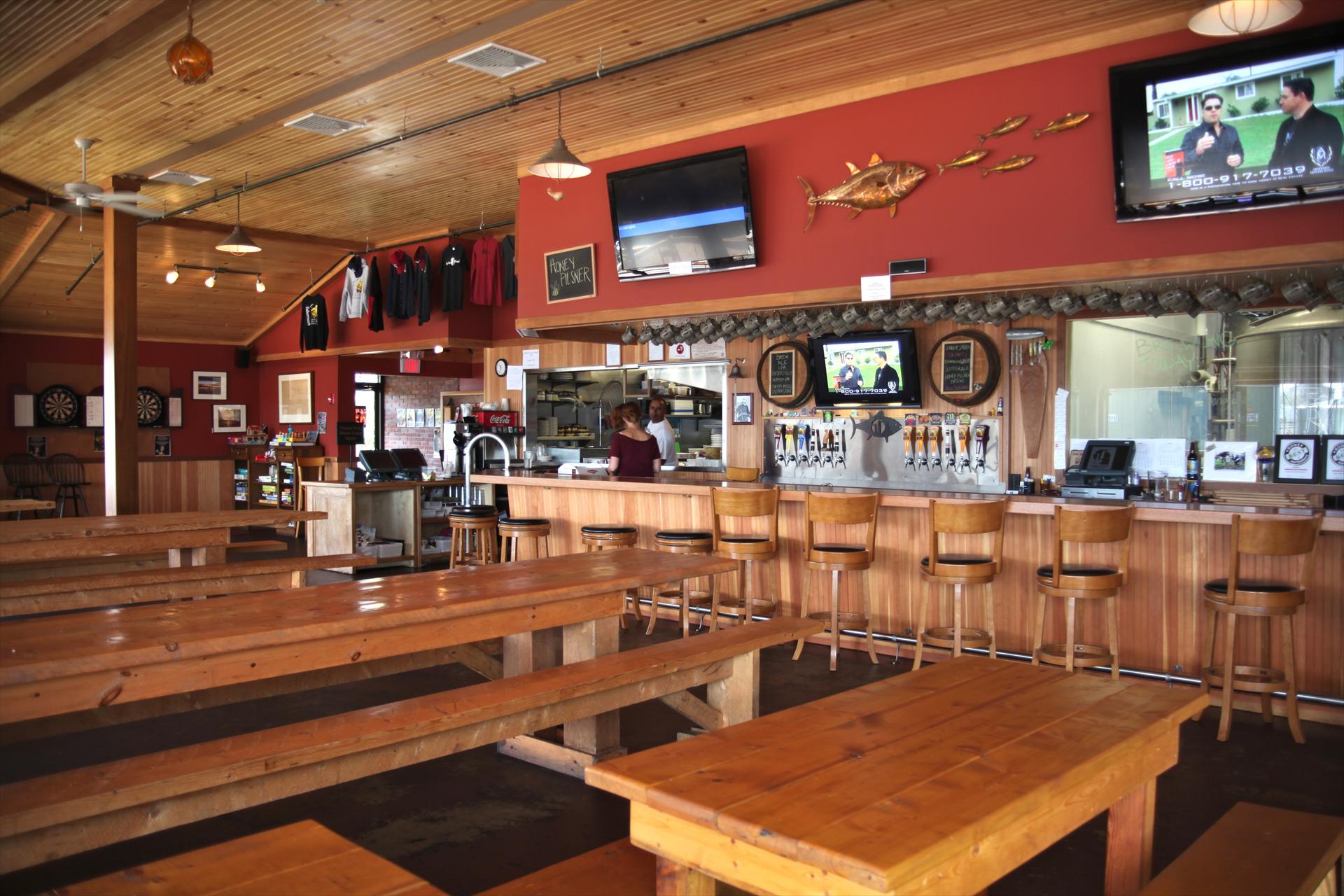 RiverWalk Brewery is where it’s at. These people love what they do and boy does it show! Founder and Master Brewer, Steve Sanderson up and quit his financial gig to pursue his passion and love of his life (second to the wife of course): beer brewing.  He opened RiverWalk 2 years ago and hasn’t looked back.

Being one hell of a beer aficionado, Steve uses only the finest quality ingredients in his beer.  No additives; only chemistry, as he says.  Not only are you getting high quality beer but they sell it in growlers and growlettes that are refillable and reusable.  Talk about commitment to excellence!


What’s so unique about this brewery? Steve uses his beer to tell stories. He used his time traveling through Europe to learn as much as he could about as many types of beers as possible. With all he accrued from England, Belgium, Germany and The Czech Republic bouncing around in his brain he took to making beer. Good beer, too.


RiverWalk is a busy place and we’re not surprised.  If you’re in the neighborhood and want to not only sample the beer but check out how it’s made, Aly, Chad or Steve himself will be more than happy to show you around.  But don’t be surprised if you have to wait. Even if you do, though, there are free old school arcade games to pass the time.


After you get to know the great folks there you’ll definitely want to come back.  We will definitely be knocking down the door for more of that sweet, sweet nectar from RiverWalk Brewery.  It’s a tough job, but some has to do it. 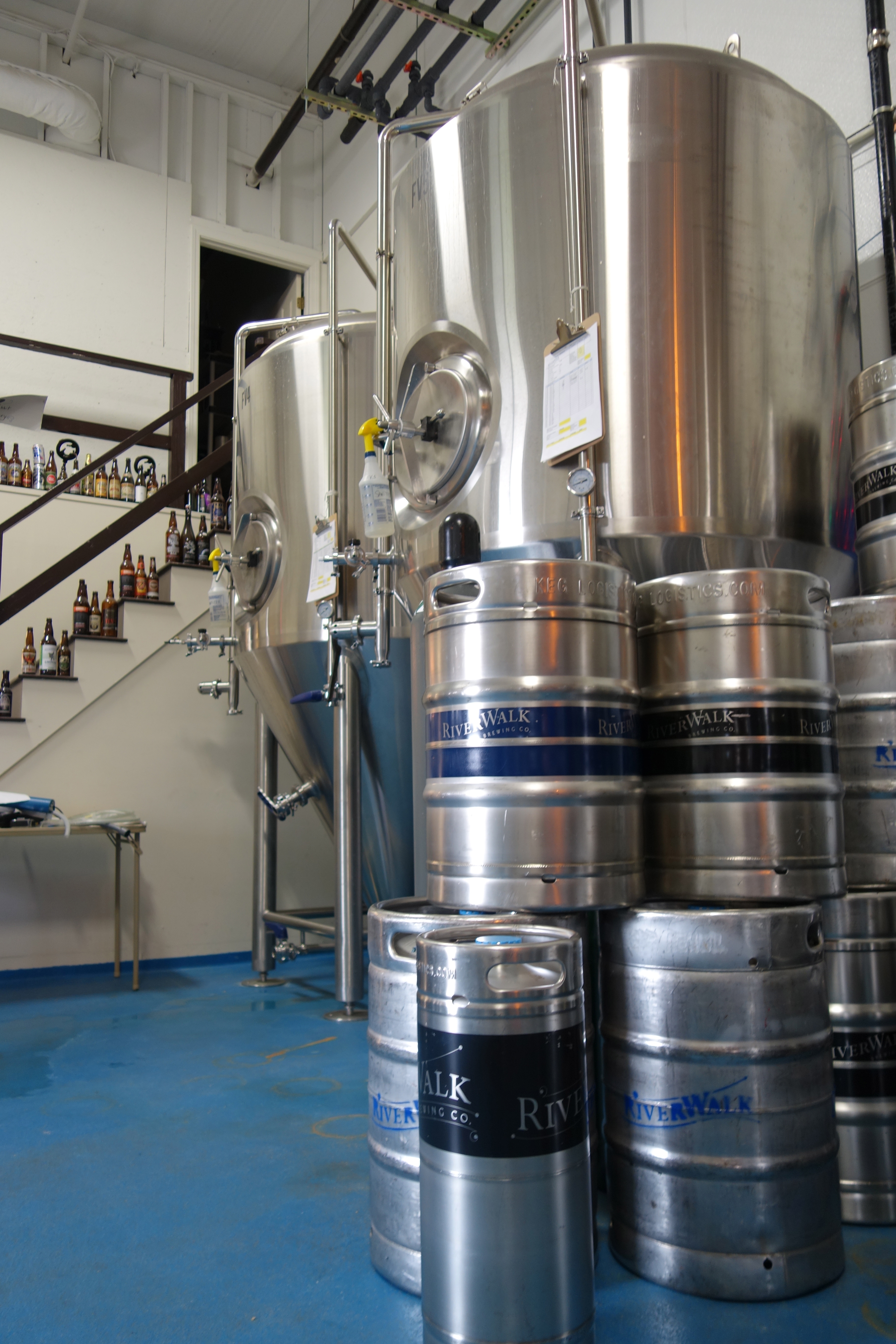 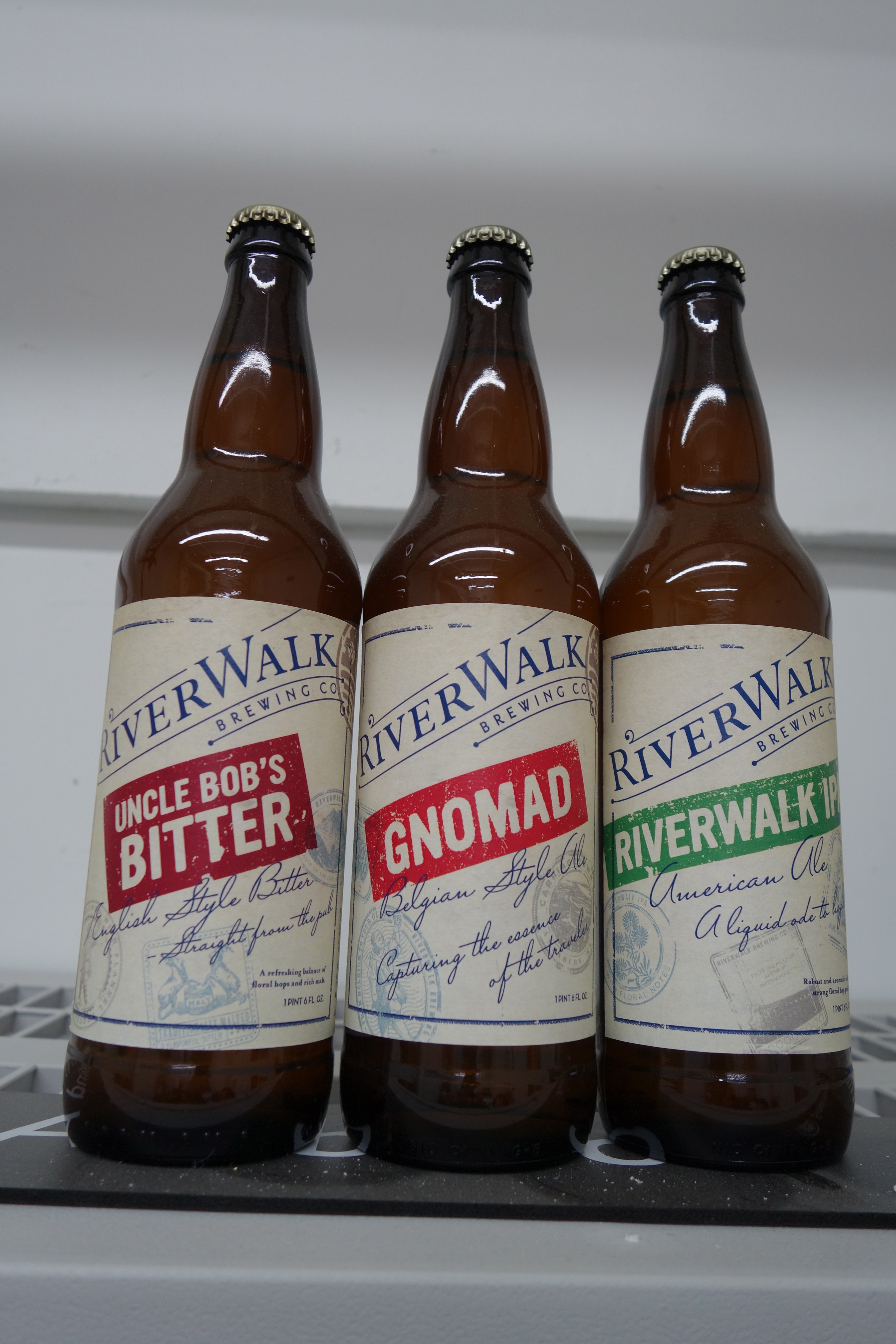 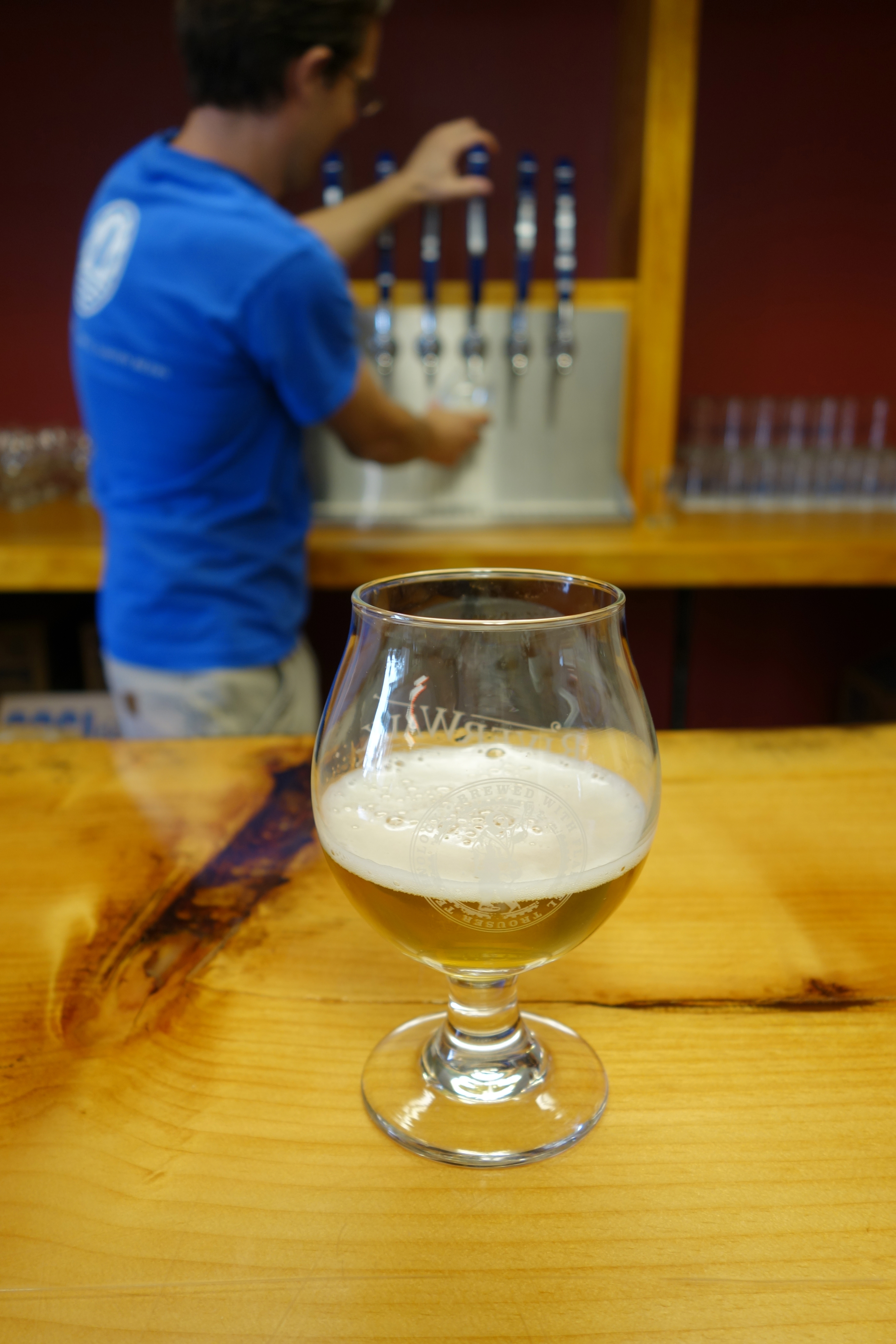