7 Gronk Tweets That Pretty Much Sum Up His 2014 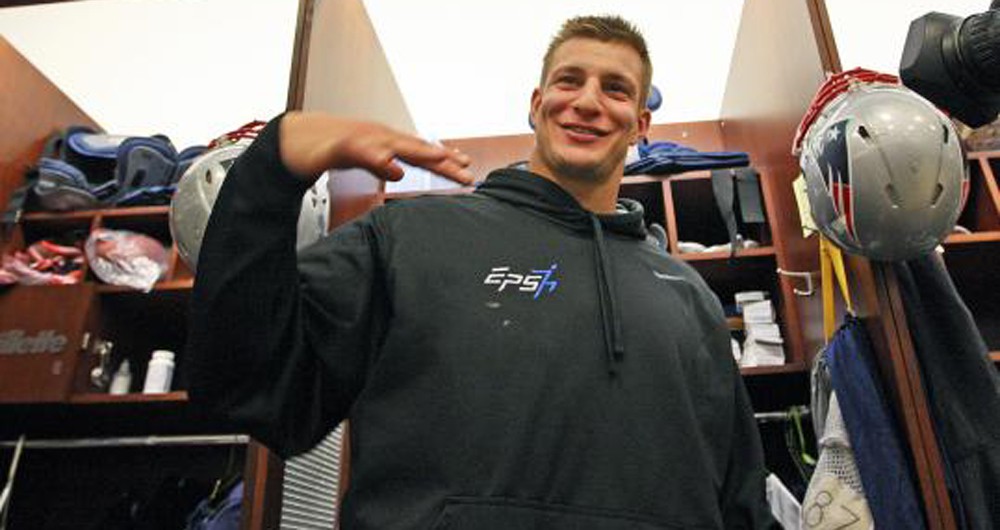 Gronk has had quite the year, which in turn means that Pats fans have had a pretty decent year as well. 2014 kicked off with our favorite tight end on the sidelines but ended with him pulling off an MVP caliber year, posing with kittens and starring in erotic fan fiction along the way. One of the greatest parts about Gronk, however, is the darnedest things that he says. Sometimes we hear this right from the mouth of the beast himself, like when he was jonesing for a big sausage on “Top Chef.”  Other times, #87 takes to Twitter to impart random bits of knowledge on fans. Here are seven of his most Gronk-like tweets from 2014.

Nice day out. Sunny and hot.

Hell yeah, Gronk! Nothin’ like the heat of August to work up a bit of a sweat. This tweet is both descriptive and informative– very standard for Rob.

6. Gronk With the Ladies

Mr. Gronkowski has never been shy about taking photos with the opposite sex. In July, however, the tight end took some time out of his busy schedule to hang with a whole bunch of ladies for his football101 camp. Way to give back, bro!

Had a great time shopping with some of my campers @dicks yesterday! #ShoppingSpree pic.twitter.com/BGVi1hkUey — Rob Gronkowski (@RobGronkowski) June 1, 2014

Might be good to add an extra “at” before the Twitter handle here, big guy. People are gonna get the wrong idea.

Gronk may be the only person on earth who can successfully pull of #NeedMassageOnButt. Also likely the only one who could tweet a picture of his grown self getting spanked by his mother and not think twice about it.

Gronk doesn’t always eat only two huge steaks, but when he does, he obviously doesn’t use utensils.

Free buffet breakfast at the hotel! Eat as much as possible and super good! #stuffup #greatdeal

Eat as much as possible and super good!

Wanna know what sucks? Pretending your not wild when you really are!! Gotta get through this and I’ll be back going balls out for all ya!! — Rob Gronkowski (@RobGronkowski) February 8, 2014

Who the hell are you to tell Rob Gronkowski that he can’t go wild? Keep a beast on a leash and he’ll only go that much more wild once set free. That’s exactly what Gronk did come September. Balls out, indeed, Gronk.

Enter to win a pair of tickets to attend The Hess Collection Seminar and Dinner as part of Boston Wine Festival 2018 at the Boston Harbor Hotel on Wednesday, March 14th. END_OF_DOCUMENT_TOKEN_TO_BE_REPLACED

The Black and Gold continue their run tonight at TD Garden. END_OF_DOCUMENT_TOKEN_TO_BE_REPLACED

Who will make the Class of 2018? END_OF_DOCUMENT_TOKEN_TO_BE_REPLACED

It’s been awhile since we talked Black and Gold. END_OF_DOCUMENT_TOKEN_TO_BE_REPLACED

You’re going to wish you were in the Northern Alps. END_OF_DOCUMENT_TOKEN_TO_BE_REPLACED